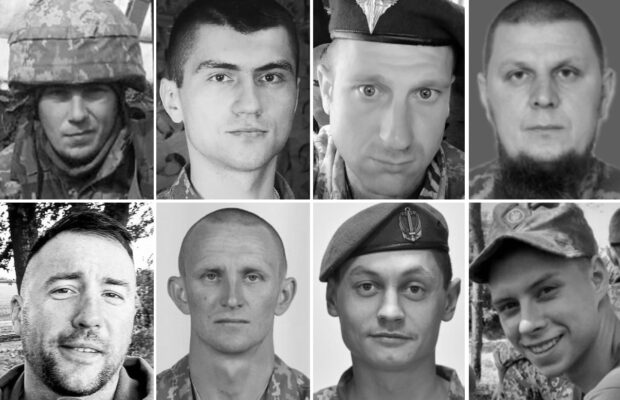 July has become one of the bloodiest months in 2020 for Ukraine, which battles ongoing Russian aggression for more than 6 years. 343 shelling attacks were reported, 45 soldiers were wounded and 8 lost their lives at the frontline, which marks a dramatic escalation compared to 4 victims in June and another 4 in May.

3 heroes died as a result of tragic events near the Zaitseve. A group of soldiers brokered a deal with assistance of OSCE to evacuate a body of their deceased comrade, but Russian hybrid forces violated the agreement and ambushed the group – which was wearing white helmets and white stripes on their uniform for identification as an armless evacuation team. One of the soldiers, Yaroslav Zhuravel, was wounded but still alive – yet the Russian side deliberately stalled brokering another deal to retreat him, which ultimately resulted in his death. Moreover, when two of the bodies were finally returned to Ukrainian side, it turned out they had been desecrated, some of the bones were removed and the bodies had signs of not being properly preserved.

Here are the names and stories of the soldiers who gave their lives to protect Ukraine in July 2020.

Oleh, born on April 5, 1991, took active part in the Revolution of Dignity in 2014 and wanted to join the Armed Forces as soon as Russian aggression against Ukraine started – but initially he did not pass the medical examination. He remained dedicated to his goal, improving his health and shape over the next several years, and was finally able to sign the contract with AFU in December 2019, joining 30th separate mechanized brigade.

His comrades remember him as a very disciplined and highly motivated man who wanted, above all else, for the war to stop as soon as possible. Dedicated to a healthy lifestyle, Oleh along with a platoon sergeant built an improvised gym he visited every day. He dreamt of a military career, but those dreams did not come true – on July 8 Oleh was killed by the enemy sniper. His mother, sister and stepfather remain behind.

Taras was born on February 18, 1989, and grew up in the Lviv region, where he graduated from the Lviv National University of Ivan Franko as a journalist. He worked as a correspondent for two TV-channels, contributed for several online-media and worked a lot with the youth. Taras was a dedicated activist, who fought against illegal deforestation, and organized a civic movement to do it more effectively.

Naturally, someone as active as Taras could not stay aside when the Revolution of Dignity started. He joined the Maidan self-defense and later became a co-coordinator of the “Search Initiative” that united efforts to look for people who were often subjected to forced disappearances during the revolution. With the start of Russian aggression against Ukraine, Taras first joined the volunteer movement but was quick to understand that it was not enough – and went to the frontline in 2015. That same year he was elected as a deputy of a Zhydachiv district council on behalf of the “Ukrainian Galician party”.

After completing the leadership course at the National Army Academy and becoming junior lieutenant, he returned to the frontline in 2019. Taras was killed on July 10 by a mine, saving two of his comrades first. He was promoted to a rank of lieutenant and recognized as a Hero of Ukraine by President Volodymyr Zelensky postmortem. He was the only son to his parents.

Born on March 26, 1988, Yevhen signed a contract with the Armed Forces of Ukraine in 2018. He joined the 79thseparate air assault brigade. His comrades remember him as both a cheerful man and a reliable friend, a true soldier.

Yevhen was killed during a shelling attack of Russian hybrid forces in the morning of July 13th close to the village of Slavne in Donetsk region. His mother, wife and two children buried him in the city of Artsyz, Odesa region, where Yevhen had spent the major part of his life.

Dmytro was born on October 18, 1978 in Donetsk region, part of which is now occupied.  When Russian Federation started its aggression against Ukraine, he already had some military experience gained at the UN peace-support mission in Sierra Leone. In 2015, he employed that experience at the Armed Forces of Ukraine, joining the 20thseparate mechanized battalion.

Dmytro was a talented de-miner and received a medal “To Defender of Motherland” for his service. He later completed the officer’s training course and subsequently became a head of reconnaissance at his battalion. Already being a lieutenant, he received another award “For the Military Service to Ukraine”, and took further part in many important operations, including liberation of Avdiivka and Maryanka – as well as many others.

Dmytro took direct part in designing an operation the result of which was a capture of Russian soldier Viktor Ageev, who was later swapped in a framework of 2019 exchange that brought many Kremlin’s prisoners home – including Oleh Sentsov, Oleksandr Kolchenko, Volodymyr Balukh, Roman Sushchenko and others.

He is remembered as a man who would always take the lead, which he did again on July 13 as a head of reconnaissance team close to Zaitseve. He died in a land mine blast. Attempting to evacuate his body, a group of Ukrainian soldiers was ambushed.

Dmytro is remembered by his parents, wife and two sons.

Mykola Ilin was born on April 23 1984 in a Belarusian city of Mohyliov, where he grew up and became a civic activist. He made a decision to switch to Belarusian language, which is under threat in its own country due to the overwhelming domination of Russian, took part in the rallies of local youth NGOs and was an active participant of protests against electoral fraud in 2006. As a result, he was violently assaulted by the police and hospitalized. Understanding that Belarus became too dangerous of a place, Mykola moved to Kyiv, where his friends helped him to continue his journey to Estonia.

There he had to start anew, but after hard work, from driving a cab to operating tours in Polish and English, he gained Estonian citizenship – learning his fifth language at the same time. Ilin was the one to protect Ukrainian activist Valentina Bardakova that was attacked by a Russian filming group in Tallinn for displaying Ukrainian flag.

In 2018, Mykola came back to Ukraine and signed a contract with marines. He particularly wanted to be a medic and underwent training at the Tactical Medicine Center. Despite offers to stay at the center as an instructor, he made a decision to return to the frontline. Mykola was in the group that attempted to evacuate Yaroslav Zhuravel – who was wounded as a result of a violated agreement when trying to retrieve the body of Dmytro Kransogrud. Unfortunately, he did not succeed and was killed by a land mine blast. His body was mutilated by the Russian hybrid forces.

His parents and a loved one remain behind.

Yarsolav was born on March 8, 1980. He joined the Armed Forces in 2015, went through some of the most difficult battles at the frontline and was a member of the 20th separate mechanized battalion along with Dmytro Kransogrud – who was also his friend.

Yaroslav’s father tells he asked his son to come back home after 5 years of war, but he felt that he couldn’t and had a duty to keep protecting Ukraine and share his experience with the younger soldiers.

When Kransogrud was killed on July 13, Yaroslav as his friend immediately volunteered to take part in the evacuation team. He took a lead of the team that was, as mentioned before, brutally ambushed despite all the agreements made and wearing all the necessary insignia. Yaroslav was wounded but still had a chance to survive – a retrieval team that included Mykola Illin was also attacked, which halted all the rescue attempts.

Yaroslav was buried in the home city of Andriivka by his parents, wife and two daughters. His comrades along with the Ministry for Veterans Affairs initiated acknowledging Yaroslav as a Hero of Ukraine – postmortem.

Vasyl was drafted to the Armed Forces in 2014 – and he prolonged his stay with the military, signing two consecutive contracts with the naval forces since 2016. As a member of air assault troops at 503rd separate marine battalion, he is fondly remembered by his comrades. They describe Vasyl as brave and  sociable, always ready to come to the rescue. He would always find a kind word for each of the fellow soldiers and could always be relied on, even in the most difficult situations.

Vasyl was killed at the age of 26 by an enemy sniper close to Horlivka, leaving behind his parents, sister and a young wife.

Born on September 21, 2001, Artem was the youngest among fallen heroes of July – he was only 18. He signed a contract with the Armed Forces of Ukraine in June 2020 and joined the 1rst battalion of the 36th separate marine brigade.

His first rotation turned out to be his last. Artem was heavily wounded during the shelling attack close to Pavlopole and evacuated to Mariupol, where doctors fought for his life for 7 hours, but were not able to save him. Artem’s parents and sister remain behind – and his father, Yevhen, is also a soldier.