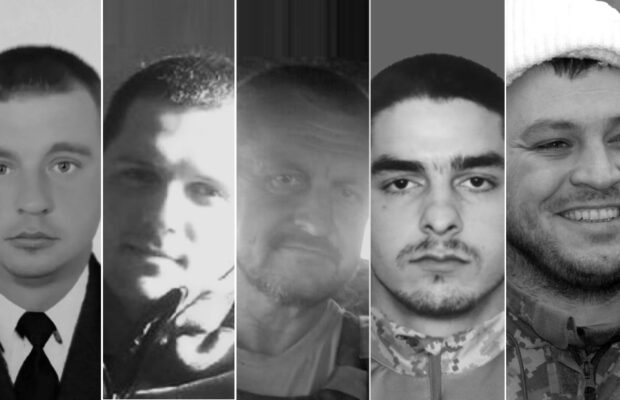 Despite the proclaimed ceasefire, 10 Ukrainian soldiers were wounded at the frontline in September – and 5 died.  Here are their short stories to remember the heroes who protect their homeland.

Vitalii was born on July 21, 1982 and was drafted to Ukrainian Armed Forces in 2015. He, however, decided to stay and signed a contract in 2016 to join the 54th separate mechanized brigade.

His bulletproof vest had an inscription – “Nazar”. No, it was not his call sign; it was his son’s name. Nazar fondly remembers the times his dad would take family to the seaside in summer or how they would have fun together and says that his father was also his friend.

Sadly, the vest was not able to protect Vitalii, when on September 5 he died in a landmine explosion. Remembered as a kind and reliable man, a good friend, he left his parents, brother, wife and a son behind.

Volodymyr was born on August 18, 1985 in Donetsk region, and occupation of its part became a personal tragedy both for him and his family that supported his decision to join the Armed Forces in 2015. A member of 54th separate mechanized brigade, he recognized all the dangers his service would entail, as his father remembers, but that did not stop him.

Volodymyr died in the same landmine explosion as Vitalii Hrytsyshyn, when they became separated from the rest of the group by fire close to the village of Verkhnotoretske. His father and two sisters remain behind.

Taras, who was born on October 24, 1970, would have celebrated his 50th birthday in a month and a half, if it wasn’t for the enemy’s bullet that took his life. He first joined the Armed Forces in 2015, was wounded but returned to the frontline after signing a contract as soon as he recovered.

The contract expired in 2018 and Taras returned home for a while, but the realization that war grinds on did not let him be engulfed in the peaceful life with his family for long. In 2020, he signed another contract, with 14th separate mechanized brigade, and returned to the frontline.

His comrades remember how much Taras wanted to see his beloved daughter again – who, along with mother, brother, sister and wife preserve his memory.

Ruslan was the youngest Ukrainian soldier who died at the frontline in September – born on January 4, 2000 he barely turned 20.

Remembered as a polite, well-mannered, open-hearted young man, he took part in putting out the forest fire in Joint Forces Operation area. However, the car suffered a landmine explosion, and both soldiers inside of it were hospitalized with severe burns and wounds. Taras, unfortunately, did not make it – 90% of his body was affected by fire.  He died the following day, and his parents buried him in a native town of Ananiev, Odesa region.

A proud member of 503rd marine battalion, Kostiantyn Overko has been fighting for his life for more than 3 months, after he was wounded by an enemy sniper back in June.

Born on August 3, 1982 in Zaporizhia, he joined the Armed Forces in 2017, although conceived this plan way before, back in 2015. After he finally managed to join the marine family – to protect his actual one, including a daughter, back at home – Kostiantyn immediately let everyone know that he won’t quit until the war is won.

His comrades say that he was an honest and straightforward man, who was never afraid to speak out – but who would also recognize his own mistakes. He was a man strong in his body and heart, and he went through more than 30 surgeries. His mother was always there for him during these most difficult times, and as Kostiantyn celebrated his 38th birthday in a hospital bed, wished him recovery – along with everyone else. But on September 24th, after yet another surgery, his heart stopped.

Kostiantyn was buried in Zaporizhia, and his mother, younger brother, wife and daughter remain behind.