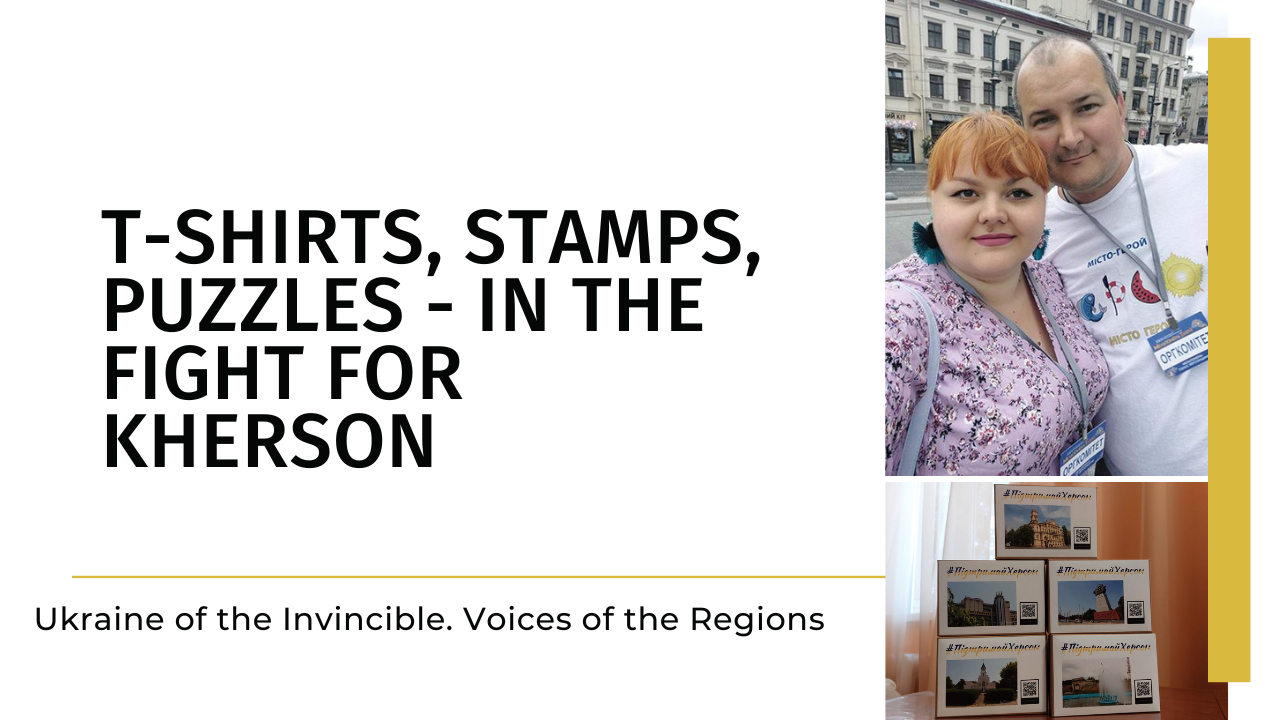 If you happened to be in Stanislav or Oleksandrivka near Kherson, you probably saw the famous Stanislav rocks. Now you’ll hardly recognize the picturesque village. The same can be said about the legendary Chornobayivka, known not only for its poultry farm. It was here that the already destroyed Kherson International Airport was located.

They are warriors of light, like all Ukrainians, regardless of where they are now, because as long as humanity exists, its good half will always fight against evil. In this fight, everyone chooses their own weapon. For Olena and Serhiy, those weapons are T-shirts, stamps and puzzles.

Seven months have passed since russia’s full-scale invasion of Ukraine, and all this time Kherson has been under occupation. Some communities in the Kherson region have been under constant russian shelling since the first days – some villages and towns have simply been wiped off the face of the earth, and in some there are still people who cannot leave and live in fear all the time: elderly people, people with disabilities, etc.

The city was captured so quickly that the people had no time to come to their senses before they were taken hostage by the invaders. All this time, there have been no official “green corridors” to leave the city or communities of the region. Every day it was harder and harder to find food, medicines, and hygiene products. Volunteers take people to Kherson and nearby communities at their own risk.

There are no official data on how many people remained in Kherson and the region after the occupation began, but various sources say roughly the same: about half left. So another half stay at home and wait for their communities to be liberated. Some people are engaged in volunteering: they help those in need.

Immediately after leaving Kherson, Olena and Serhiy began helping volunteers who remained in Kherson and support life in the city and the region.

Olena has long been fond of photography and has her own Facebook page Photo by Pimenova. Serhiy is a designer. Therefore, they created a number of prints for T-shirts, shoppers, caps and other things with Kherson symbols and set up their production in Kryvyi Rih. 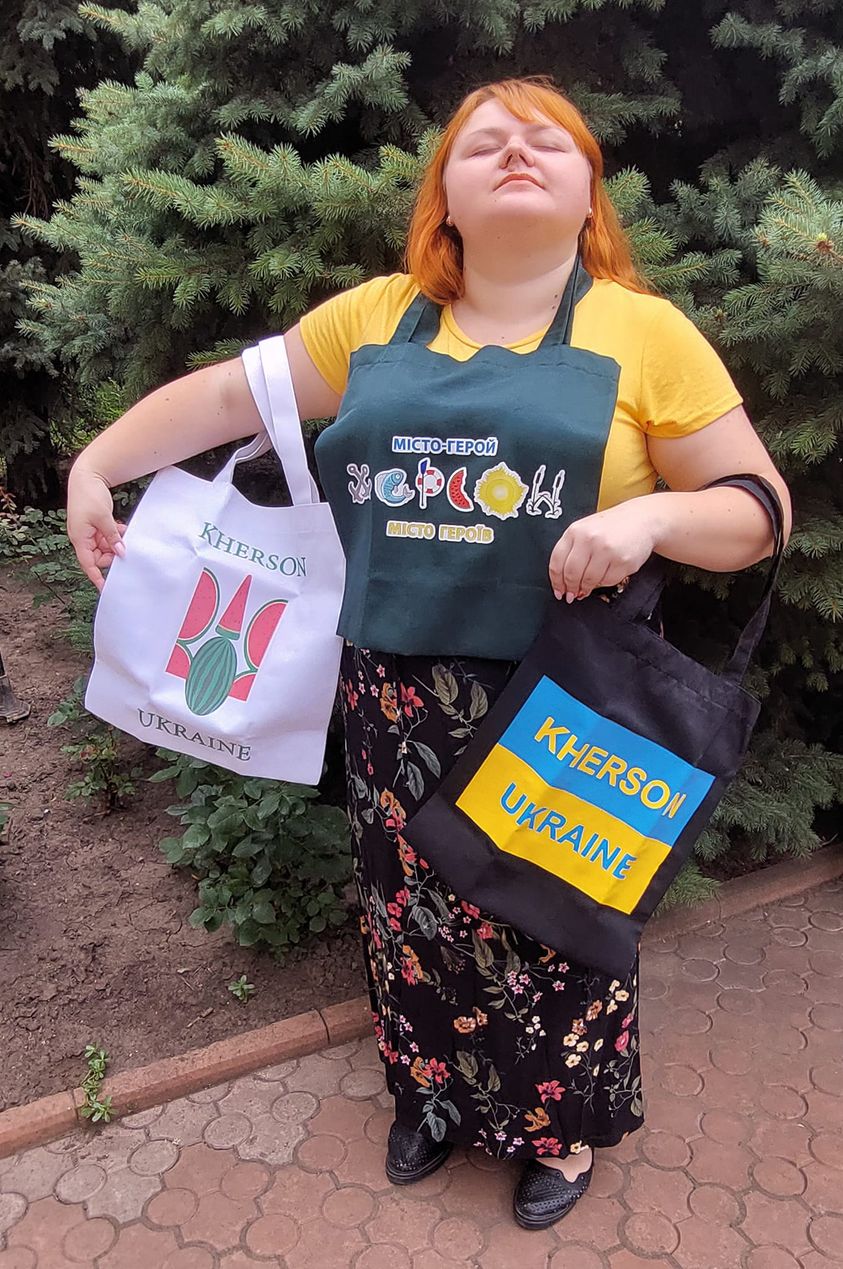 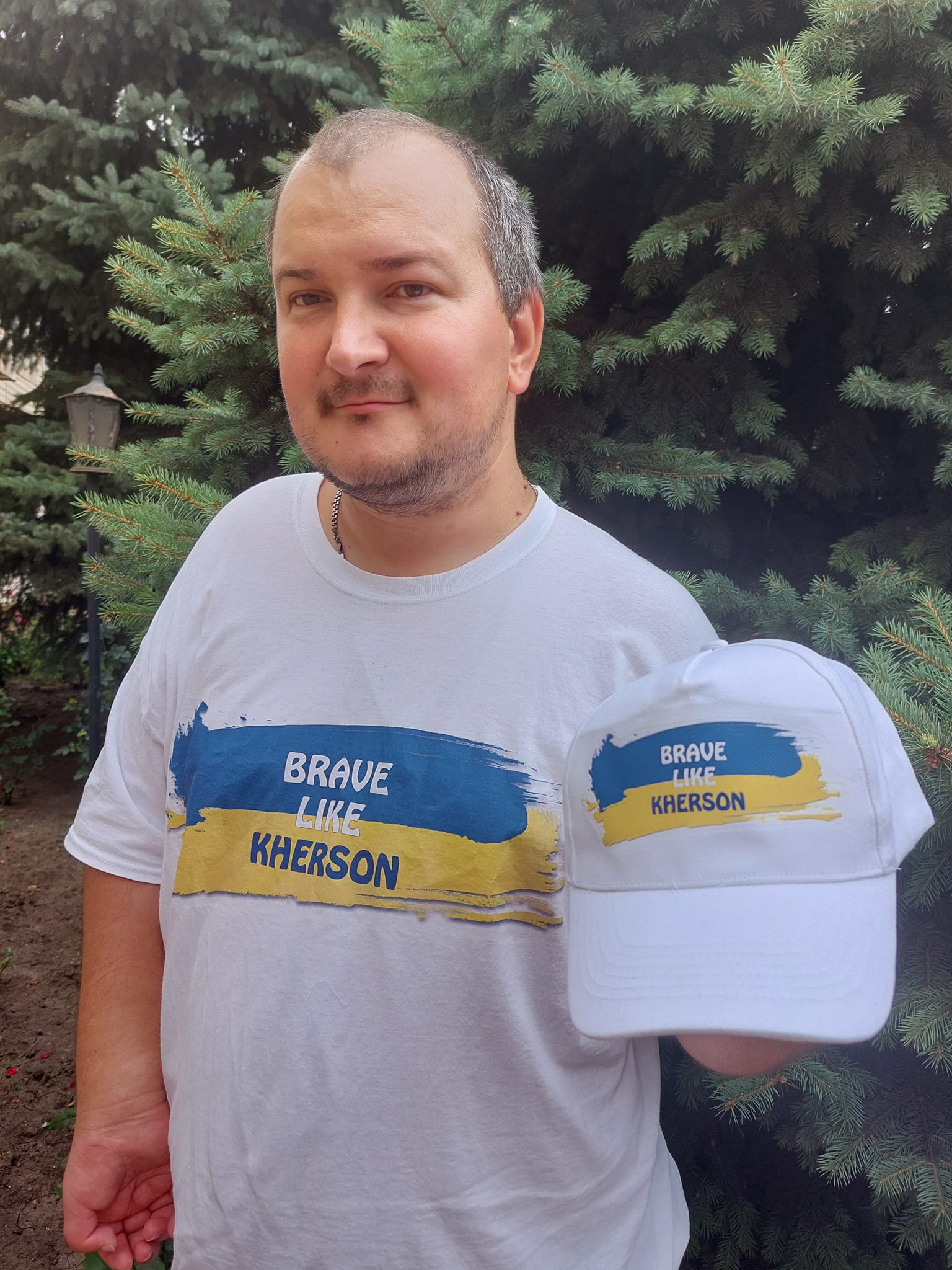 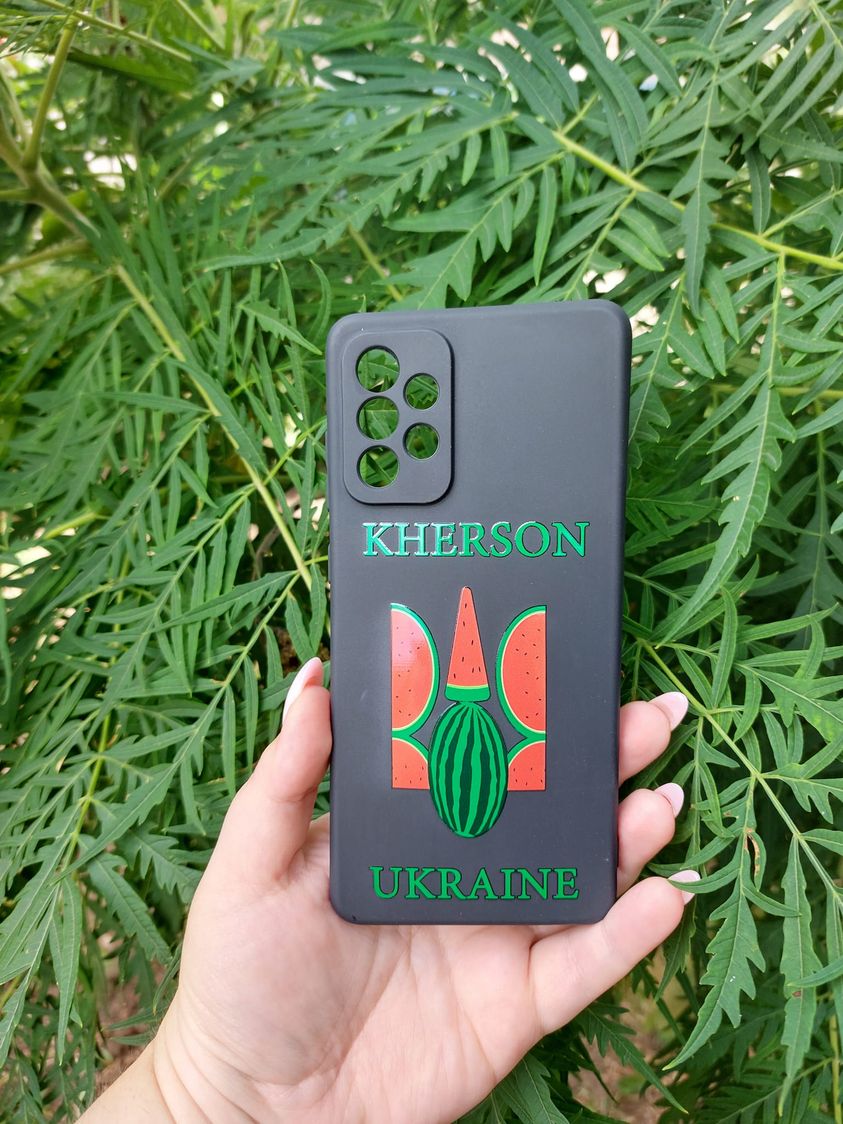 All of these can be purchased – Olena sends them to any corner of Ukraine where delivery is available, and all the earned money is given to Kherson volunteers. The volunteer project started on June 4, and as of June 13, Olena and Serhiy sold 22 T-shirts with a Kherson print! The business went further – and today there are more products in the arsenal of the Kherson artists. As of July 4, Olena and Serhiy had 7 Kherson prints, sold 84 T-shirts, and transferred 8,800 hryvnias – profit from sales – to 4 volunteer organizations in Kherson and the Kherson region. On July 24, it was already 13,800 hryvnias.

“The money from each T-shirt or shopper is distributed as follows: part goes directly to pay for the printing and the T-shirt, because we don’t have a machine, we order all this from a specialized company. What’s left goes to help volunteers,” says Olena.

Olena came up with the T-shirt print in Serhiy’s photo in occupation, while she was still in Kherson.

“It had been the third month since russian scums began to stamp on our Kherson land with their dirty boots. I felt pessimistic and wanted to cry from helplessness. And then I started thinking about our wonderful people. After all, Kherson and the Kherson region are not only the Dnipro, the sea, watermelons and tomatoes. These are, first of all, people! Some of them have not realized yet how incredible they are.

And now you have the answer to the question: “What is Kherson like?” There are 6 more author’s prints about Kherson, which can be seen on T-shirts, shoppers and caps.

All proceeds from the sale go to help volunteers who take care of the Kherson people in occupation,” Olena said.

“By some miracle, these photos survived. It must have been a sign”

Leaving Kherson for the Ukraine-controlled territories is always a big risk. Conventionally, there are two escape-routes, but the itineraries change every day. Both routes are dangerous, and those who take the risk of leaving have to cross a large number of russian checkpoints: from 20 to 40 on average. At each of them the orcs either can stop the car or not, they can either check documents and belongings or not; they also often check passengers’ gadgets. Sometimes people have to spend a few nights amid the steppe, because the convoys of vehicles are long, and the orcs don’t let them pass through checkpoints quickly. This is a separate story, which is hardly worth telling in detail at the moment.

Before the large-scale invasion, Olena took a lot of photos and shared them on the Internet, including on her page. Before leaving occupied Kherson, she deleted a lot of information that she had kept: this is what Kherson people usually do, so as to evade provocations at checkpoints.

“Before leaving the city, I cleared my mobile and flash drive on the camera. But by some miracle, the photos survived. It must have been a sign,” Olena says. It is about the embankment in Kherson, the art museum, the church, the gate in the Kherson Fortress park and the Fregate hotel. Now these images have become puzzles, the pieces of which are hearts, planes, and silhouettes of Ukrainian Warriors and the name of heroic Kherson. 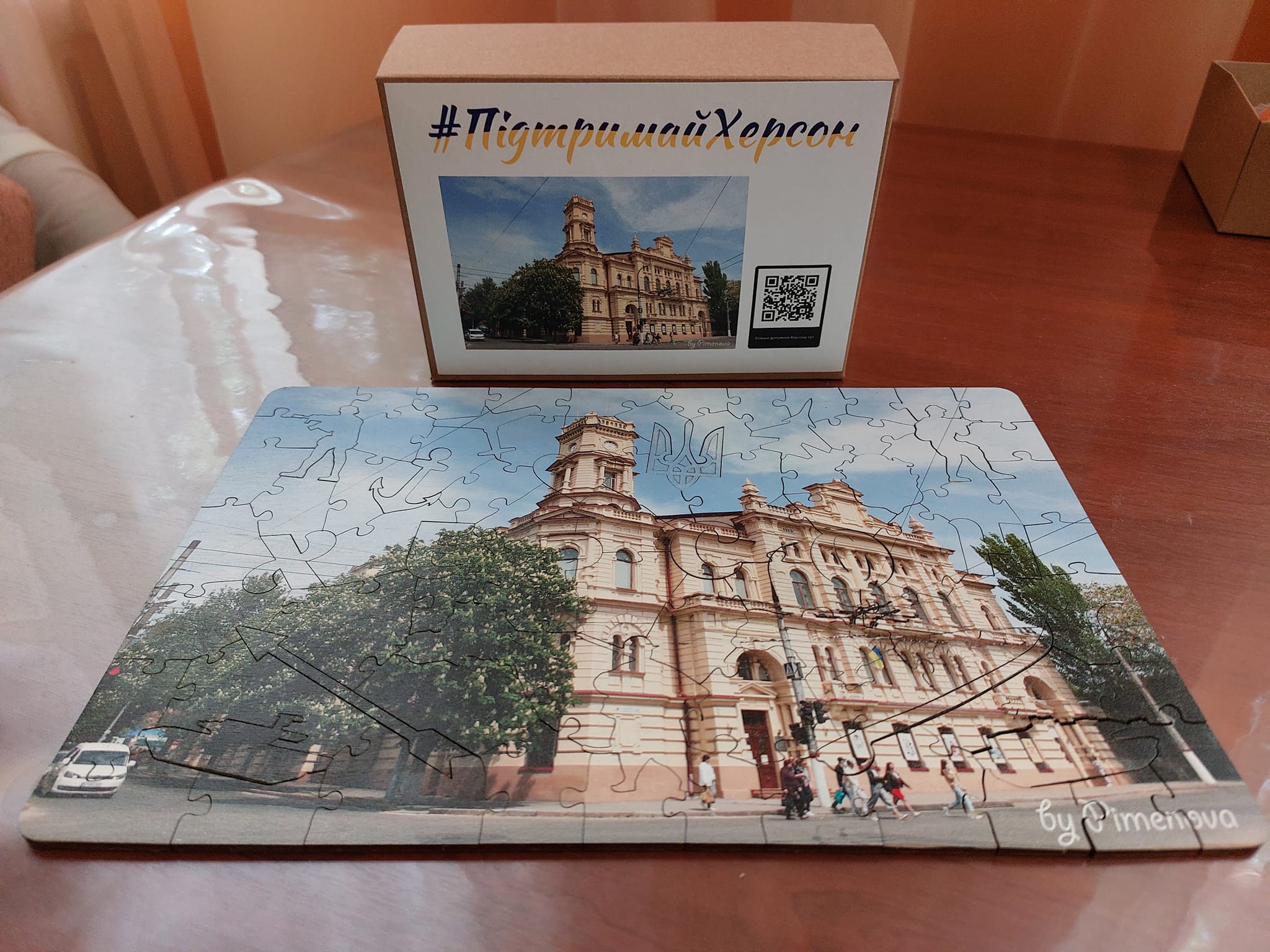 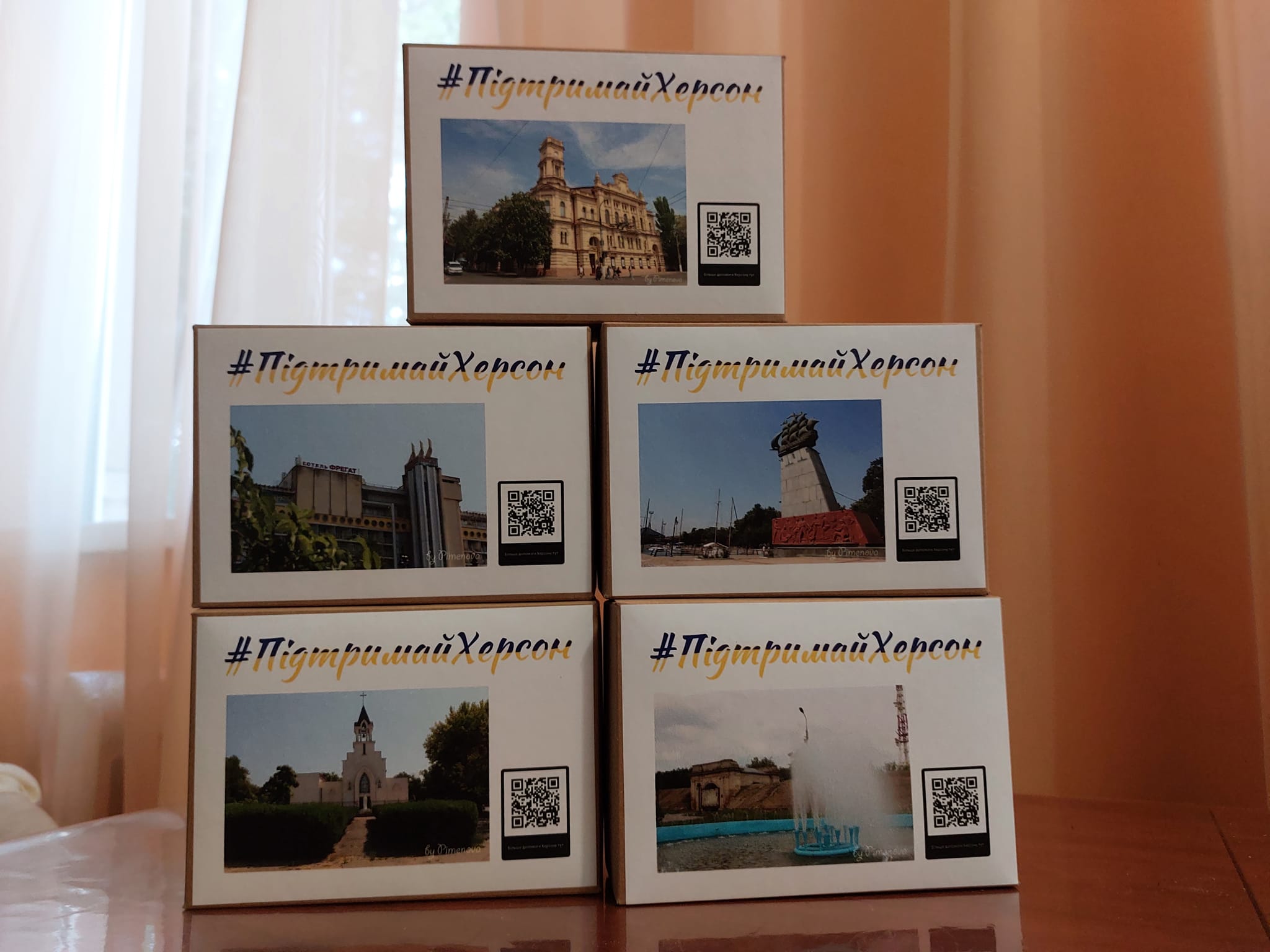 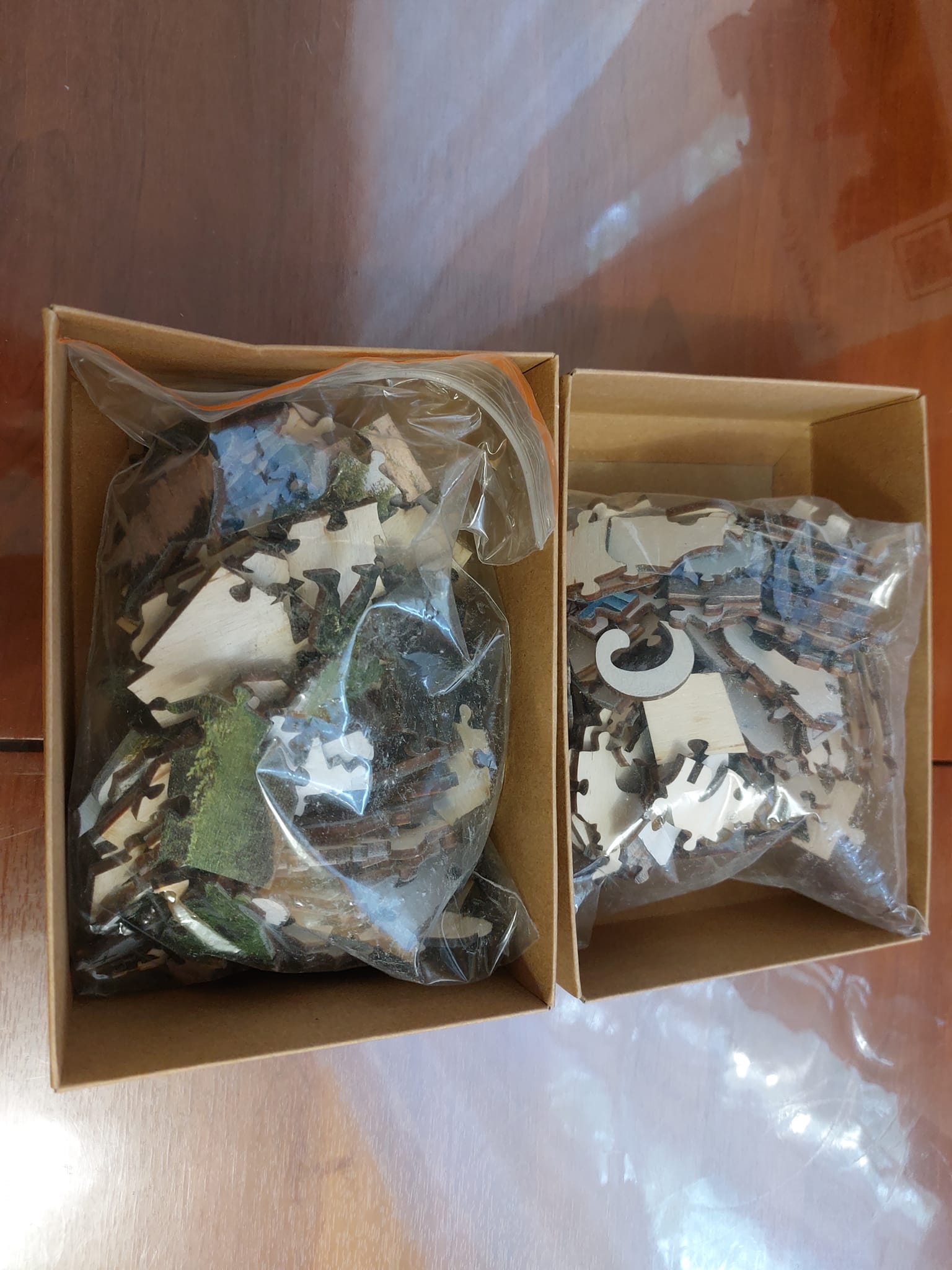 You will get a picture of the Kherson Regional Art Museum on adding every piece of the puzzle. The museum has been seized by the russians. Its fate is currently unknown.

“I suggest that you draw our native Kherson region”

One of the latest additions to Olena and Serhiy’s collection are paintings by numbers that reproduce the Kherson region’s beautiful nature.

“The process of drawing is very relaxing and calming. It distracts you from negativity and helps organize your thoughts,” Olena says. “I suggest that you draw our native Kherson region. I took the first photo a few years ago on the way from Zaliznyi Port to Kherson: the sky and sunflowers that form our State Flag. This year, the enemies deprived us of the opportunity to admire such beauty on our land. But it will not last long. Other photos are the result of the implementation of my idea.” 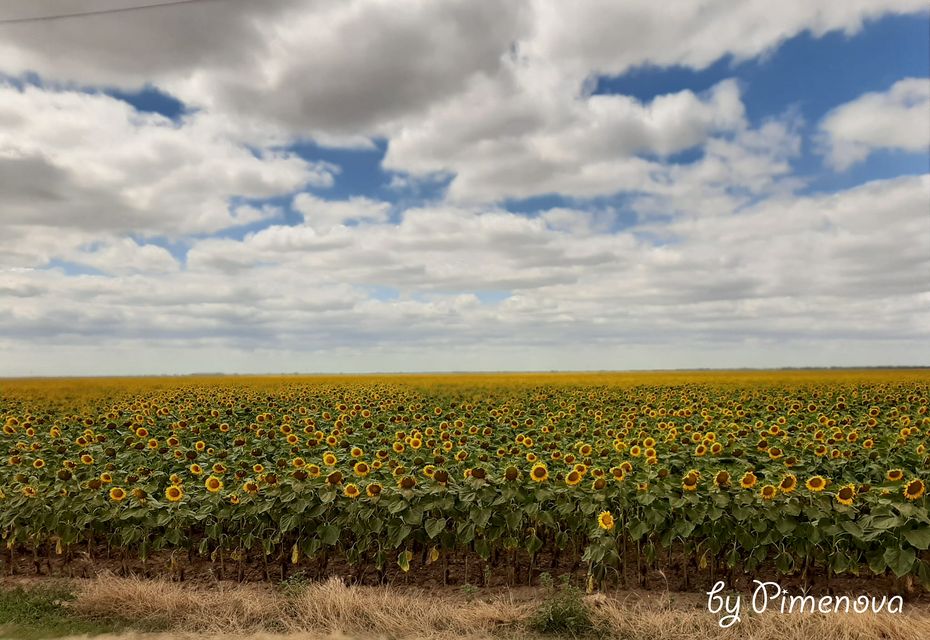 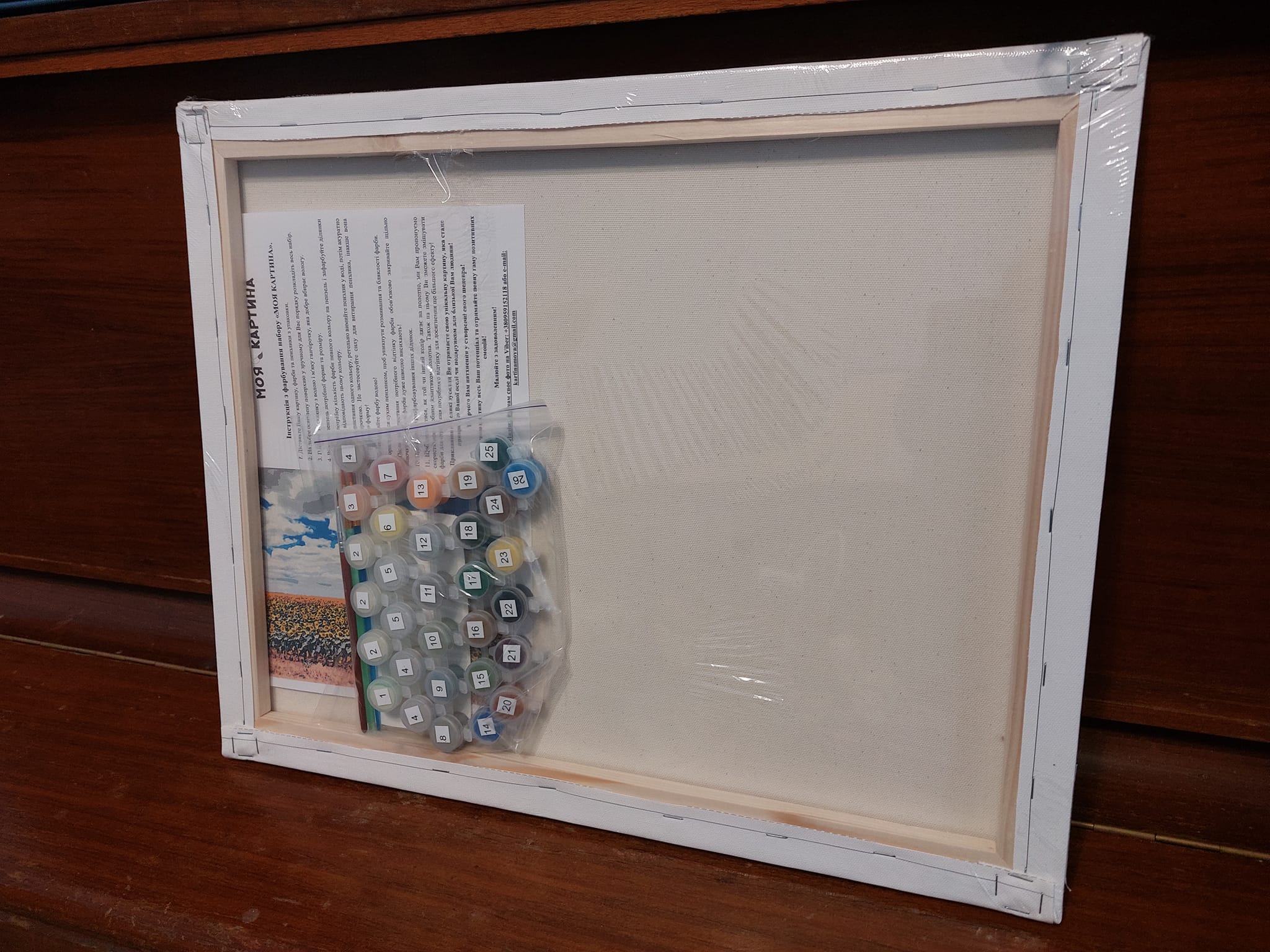 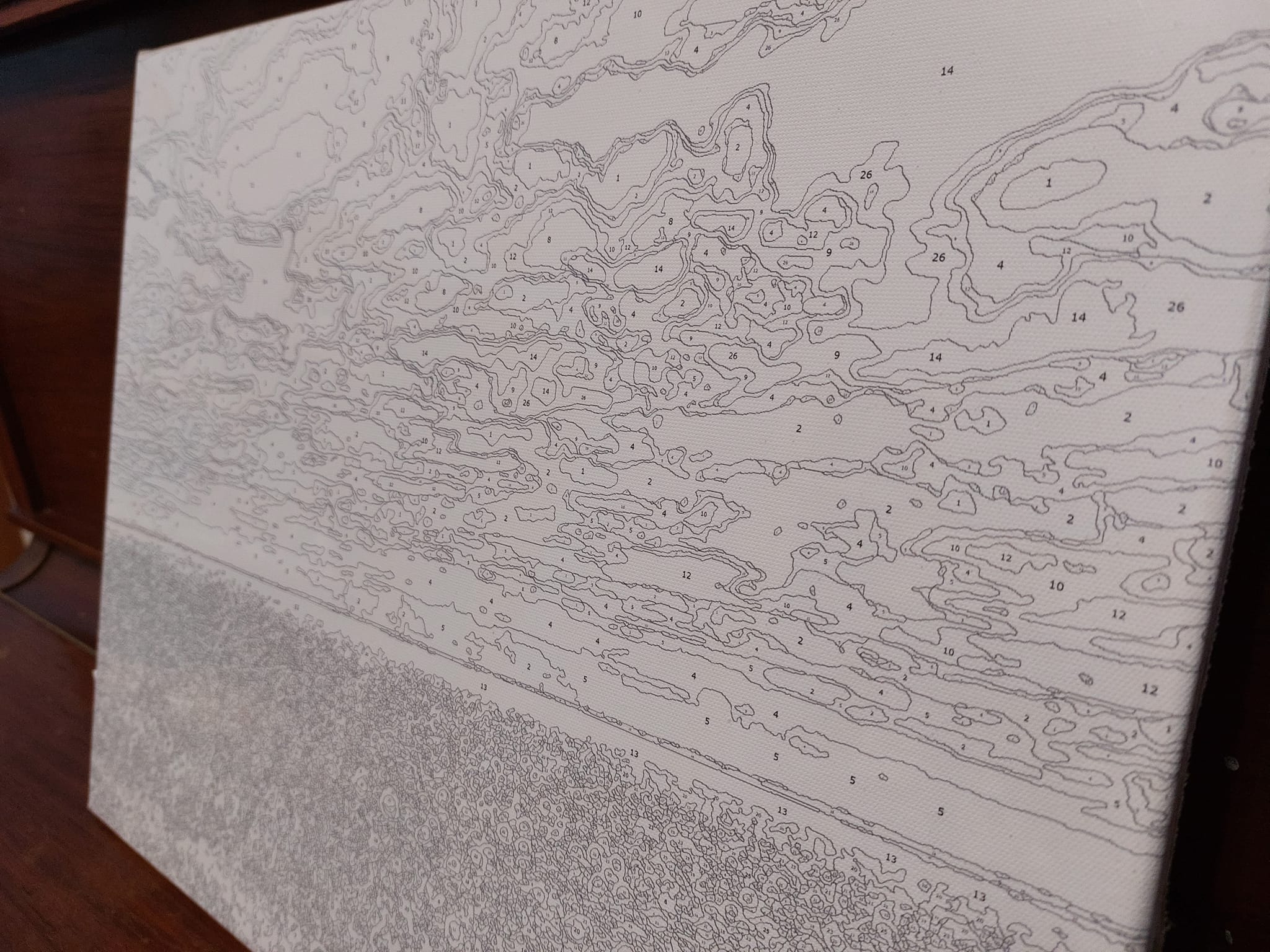 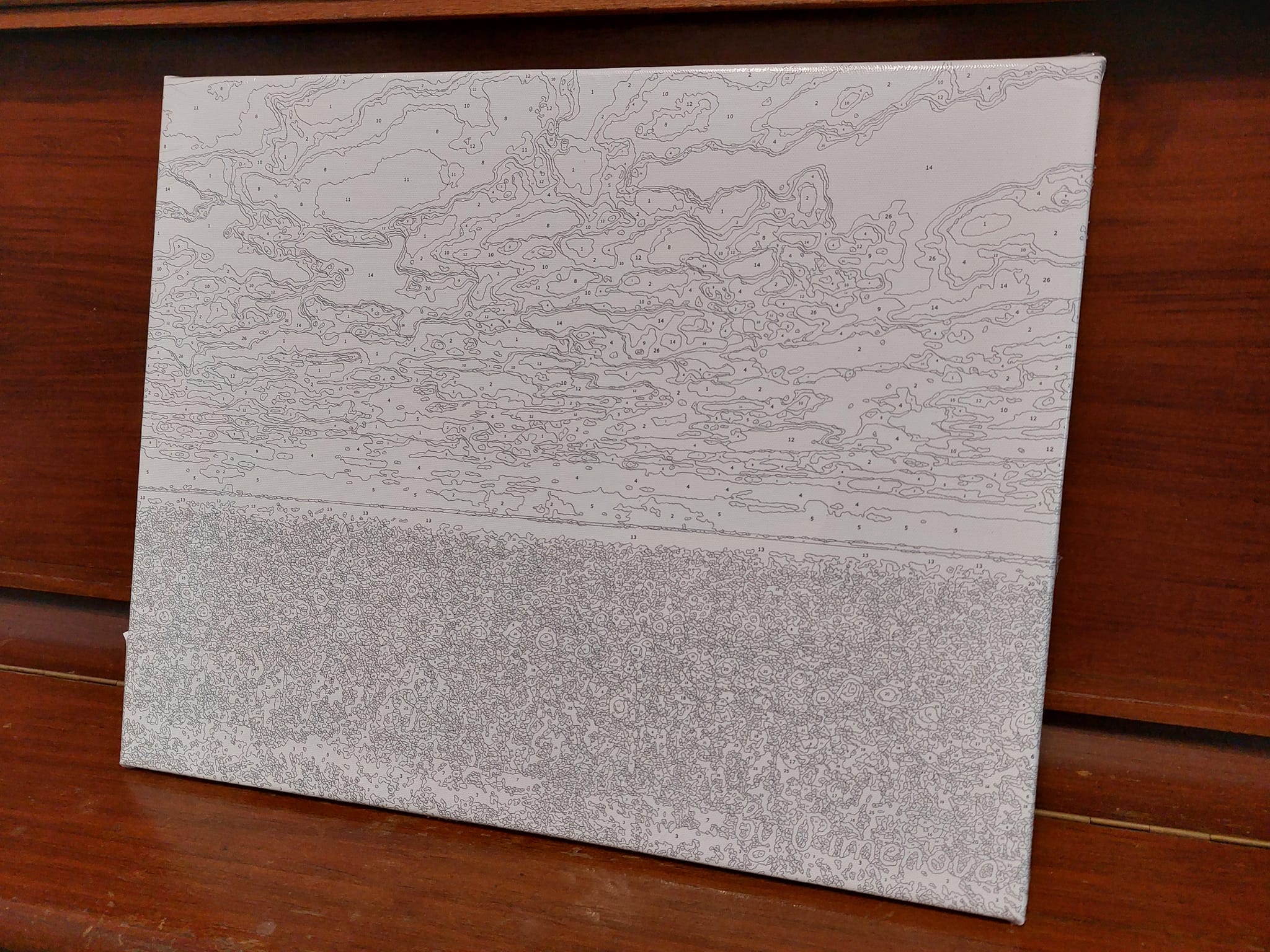 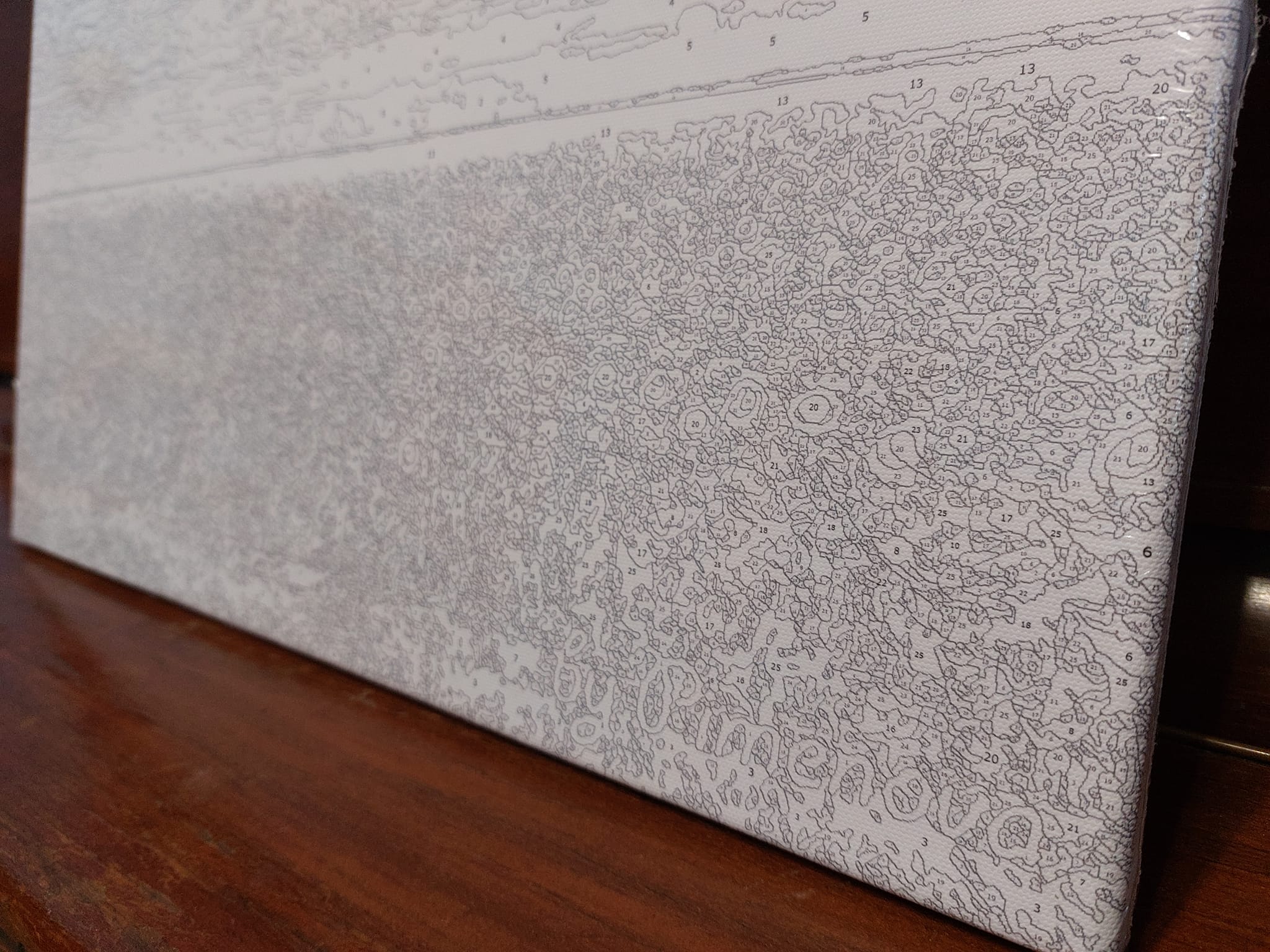 As the excitement surrounding patriotic brands in Ukraine is growing, Olena and Serhiy have not stood aside. Philatelists, pay attention!

Iconic and bright images were chosen for reproduction: the building of the Kherson Art Museum, the monument to the first ships on the city embankment, a zebra in the Askania-Nova nature reserve. The slogans “Kherson is Ukraine,” “Hero City – the City of Heroes,” “Brave Energetic Determined Courageous Optimistic Invincible” in Ukrainian and English were added to them. Olena herself developed the sketches. She started working on them in her hometown, before leaving. Her husband, an IT specialist, helped to digitize those sketches and refine the design. The first sheet of nine stamps has already been printed.

“We have received a batch and have already posted invitations on our Facebook and Instagram pages for those willing to buy the new product. As in the case of T-shirts and mobile phone covers, we will continue transferring all proceeds to volunteer organizations to purchase food and medicines for the people of Kherson,” Olena says.

Here are the sample stamps.

With pugs to Eurovision!

“The voice of the Kherson region does not subside!” Olena remarks almost everywhere. With an aim to make Kherson and the Kherson region known, she and Serhiy promote their products, help volunteers and talk about the real state of affairs in Kherson.

At the end of this article, we will also mention Serhiy’s design solution, which was born when Ukraine won the Eurovision Song Contest 2022. It was then that Serhiy created a logo for Kherson, the host of the next contest. Despite the fact that the UK will hold the competition on behalf of Ukraine, the logo designed by Serhiy remains. Vyshyvanka, a “Stefania cap,” the Flag of Ukraine, Kherson watermelons, and Olena’s favorite breed of dog – a photogenic and cute pug are all in the logo.