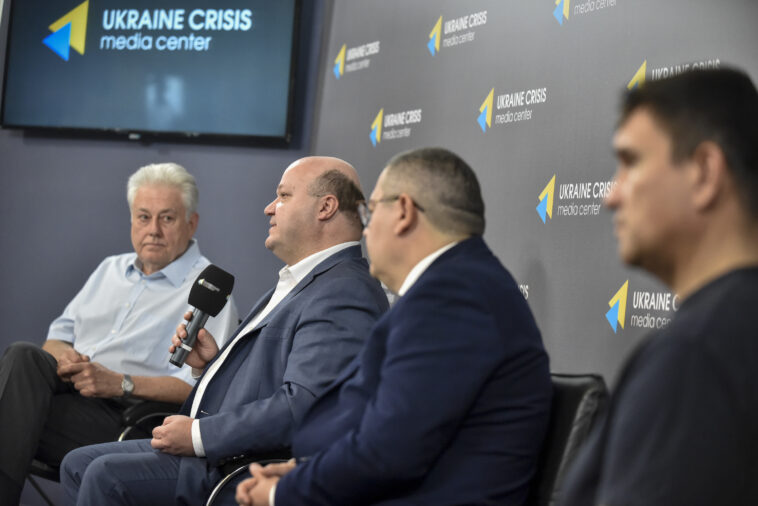 Valeriy Chaly, Ukraine’s Ambassador to the US (2015–2019), UCMC Chair of the Board, started the discussion with a statement that international organizations were created to resolve conflicts and seek consensus to negotiate. However, those organizations showed their inability to respond to the war in Ukraine, their time has passed. The ambassador singled out three key tasks currently faced by Ukraine. First, we need international support to recognize Russia as an aggressor state. Secondly, our country needs more weapons, as the outcome of war depends on success on the battlefield. Third, we should think about the future, because the security system, which was built for decades, is being destroyed before our eyes.

“More than 100,000 signatures have been collected around the world for the exclusion of Russia from the UN Security Council. First of all, we are talking about the deprivation of the right of veto. The aggressor that attacks and simultaneously blocks the possibility of considering this issue is nonsense. Therefore, it is necessary to ask a radical question: can the country simply have the right of veto today in such conditions? If we talk about how many countries will support it, I think it is definitely more than NATO, the EU, and their allies. We achieved this together on the issue of Crimea. More than a hundred countries voted for that resolution, and this so-called “UN hundred” is the minimum number of countries that can stand on our side. “Crimean Platform” and all the other resolutions corroborate that it can be increased. It works if you ask the question in the right way. Therefore, the task is urgent: to deprive Russia of the opportunity to block consideration of issues related to its actions. How can we do it? This is a matter of legal mechanisms,” Valeriy Chaly stated.

The diplomat also emphasized that the issue of Russia’s isolation is more than urgency, and radical measures to stop the activities of those organizations with Russia as a member should be taken. The speaker cited the example of the Black Sea Economic Cooperation Organization.

“Rebooting is one option, the other is that the organization must cease to exist. BSEC is one of such organizations,” Ambassador Chaly assured.

Volodymyr Yelchenko, Permanent Representative of Ukraine to UN (1997-2001, 2015-2018), noted that even before the beginning of the active phase of the war, the invasion of Russia on February 24, there were challenges in the world that made some countries think about whether Russia deserves to preserve the status which it has had since December 91.

“When speaking about the UN, ordinary citizens and even experts often imagine the UN as a super organization that governs the entire world.In fact, the UN consists of 193 countries-members. And those who think of the UN as something big and high, they mean the UN Secretariat or the UN Secretary-General Allegedly, they are supposed to do something like that and should do it, but nothing is done. In fact, apart from the moral authority of Mr. Guterres, he does not have any other leverage, at first glance,” Ambassador Yelchenko stated.

“We need to understand that any global decision that, if not expelling Russia from the UN, will gradually limit its rights, must be supported, if we rely on the General Assembly, by no less than two-thirds of the countries,” the speaker noted.

The diplomat recalled the precedent of the exclusion of Taiwan (Republic of China) from the UN and its simultaneous exclusion from the Security Council – with the replacement of the People’s Republic of China in 1971. At the time, it was supported by two-thirds of the votes in the UN General Assembly. This experience might come in handy now.

Pavlo Klimkin, Minister of Foreign Affairs of Ukraine (2014-2019), stated that classical international system, built after the Second World War, has dissapeared. And if there is no system, it is easier to break it.

“Today there is no political consensus regarding the exclusion of Russia from any system of international organizations. There are different reasons for it. It’s not a matter of sympathy, sympathy is a matter of past. But there is someone’s desire to use the existing system or to use the role of Russia in this very system. Therefore, we should start by sabotaging Russia’s participation in the system of international organizations,” the diplomat noted.

In the near future, we should not expect the decision to exclude Russia from sectoral organizations such as ICAO and the IAEA, as they are considered critical for global security issues, the speaker is convinced.

“The system of the UN is turning into a system of arranging political and personal interests, redistribution of funds, etc. It is necessary to understand that we must increasingly and as efficiently as possible sabotage those decisions that are important for Russia. This requires coalitions, sometimes situational, sometimes permanent. We should build coalitions first of all with Western and Asian countries. The situation in Africa is more complicated, but nevertheless, there are still many countries that could not be called Russia’s friends, the same does Latin America. Basically, I am a supporter of the radical approach, I stand for raising our stakes in order to, if not destroy, this system. Unfortunately, there is no consensus on this. At the very least, it should be rebooted,” ex-head of Ukraine’s MFA underlined.

Oleksandr Merezhko, MP, Committee on Foreign Policy and Inter-Parliamentary Cooperation Chairman, emphasized that Ukraine is now discussing the ways to exclude Russia from the UN and other international organizations. If we are talking about the UN, the question should be asked in a slightly different way – what are the legal grounds for Russia to be a UN member. These legal grounds do not exist.

“Russia had no right to inherit the place of Soviet Union as a permanent member of the UN Security Council. And it was a political decision, not a legal one – it is a well-founded opinion. Because even ordinary logic, not only legal one, suggests that Russia cannot be the successor, as it likes to call itself, of the Soviet Union. These are different subjects of international law. Therefore, it is no accident that the UN charter still refers to the Soviet Union, not to Russia,” MP Merezhko noted.

The speaker also emphasized that collective security in the UN system is destroyed and does not fulfill its crucial task.

“We’re already witnessing the process of isolation and transformation of Russia into a pariah state, into a kind of a failed state. Now it is necessary to persistently and systematically work on it. Such work is already taking place both within the framework of parliamentary diplomacy and within the framework of the Ministry of Foreign Affairs,” he concluded.