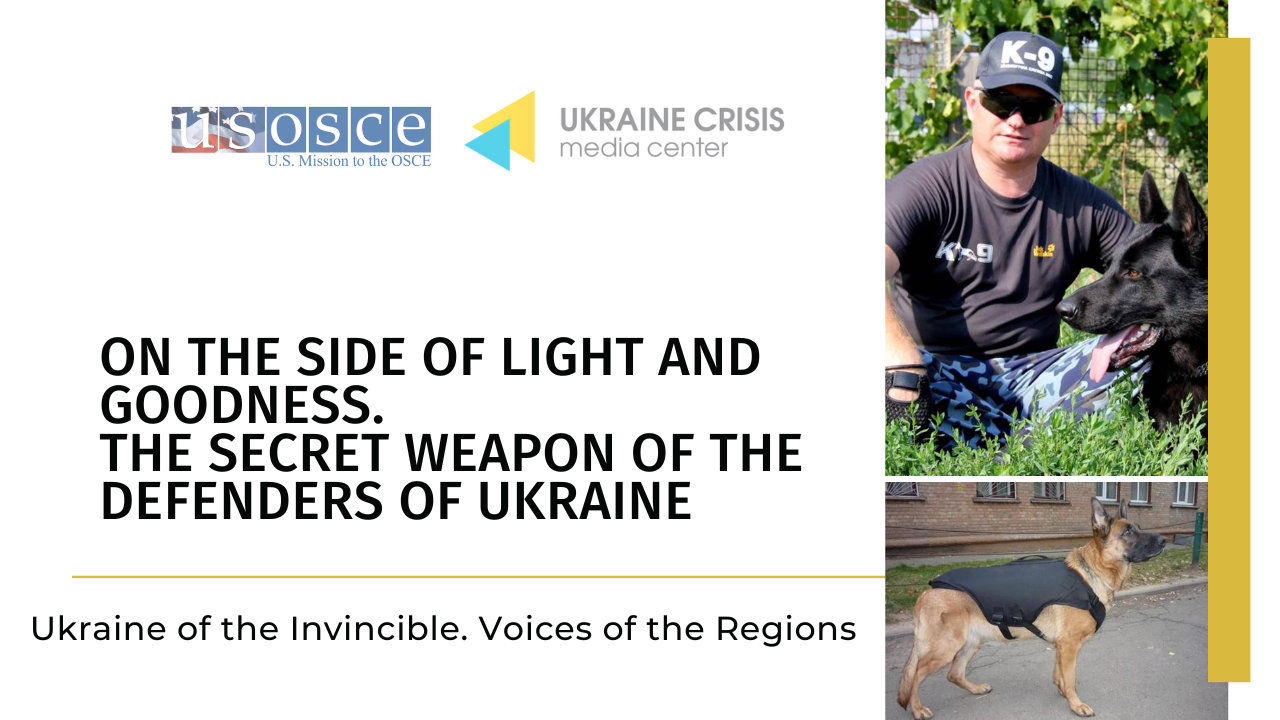 When we say that the entire Ukraine has risen against the russian enemy, we do not exaggerate. Our soldiers win back our homeland with weapons in battle, volunteers help on the home front, entrepreneurs work to pay taxes and give money for the purchase of drones, and service dogs perform tasks in units of the Ground Forces, Air Assault Forces, Air Force, Military Law and Order Service, Support Forces and Logistics Forces. There are over five hundred of them in the Armed Forces now. They are very reliable partners and loyal friends to our defenders.

There are real celebrities among them. Who does not know Patron? It is the most famous sapper dog in the world. It has already found more than 300 explosive ordnance items. The four-legged hero is featured on postage stamps, filmed in videos, and awarded a special prize at Cannes.

However, every service dog can be called a hero. Military personnel involve them daily in special operations to search for people, clear areas, detect explosives and firearms. And although, unlike some people, they do not strive for fame, we should talk about these reliable helpers as much as possible.

Veronika Lyashenko, a junior inspector and dog handler, has been working with a partner dog named Archie for two years. Since the beginning of the full-scale Russian invasion, not only law enforcers, but also their four-legged partners have been working very hard. Archie specializes in detecting ammunition.

Labrador Archie is 5 years old. It is one of the many favorites of the canine center at the Main Department of the National Police in the Zaporizhzhia region. While preparing for service, dogs are trained to detain a conditional violator, search for drugs, weapons, and explosive substances.

Veronika Lyashenko notes that close contact with a dog helps minimize daily risks. “During the latest search we found flares, grenades and machine gun cartridges,” she says about her four-legged partner’s achievements.

While on duty, dog handlers together with their search dogs work at checkpoints and train stations in the Zaporizhzhia region, go to crime scenes and patrol the city.

Service dogs are reliable comrades and skilled warriors, as the head of the Zaporizhzhia Regional Club of the TSOU Service Dog Breeding, the former head of the canine special unit at the Department of the Ministry of Internal Affairs of Ukraine in the Zaporizhzhia region and a member the international K-9 canine law enforcement unit of the UN peacekeeping mission in Kosovo in 2002-2003 Yevhen Mykhailov said.

If we can speak very tentatively about the forces of nature in the service of the Armed Forces, the training of service dogs is quite manageable, according to experienced dog handler Yevhen Mykhailov. And this painstaking work is carried out by highly qualified professionals.

“The canine service in Ukraine has a glorious history and a lot of accomplishments, he says. “In particular, in a certain historical period of time, a public organization engaged in training service dogs in civil society began actively developing. I mean, first of all, the kennel clubs of the Society for the Promotion of the Army, Air Force and Navy. But lack of interest and support from the state and, probably, insufficient number of involved enthusiasts led to the decline of the movement. However, three years ago, the Zaporizhzhia regional organization of the Society for the Promotion of the Defense of Ukraine, with the support of the first deputy head of the Administration for Supervision and Security, Protection and Operational Work of the State Criminal Executive Service of Ukraine, Volodymyr Melyukhov, who initiated the revival of the canine unit in the law enforcement structure subordinate to him, restored this activity.”

It is noteworthy that police colonel Yevhen Mykhailov, who by that time had already retired from his position of head of the canine center at the Main Department of the Ministry of Internal Affairs of Ukraine in the Zaporizhzhia region, was that particular enthusiast who headed the local TSOU kennel club.

“For over 40 years of training service dogs, I have gained a lot of experience. So I analyzed my predecessors’ activities and I have a lot of my own experience, which prove to be effective even now,” explains Yevhen Mykhailov.“ It’s a very painstaking work. You must choose a month-old puppy suitable for training and then find a person to provide necessary care and food for it. When the puppy is four-months old, it must go through the relevant pre-testing for further service. At the same time, future dog handlers are selected, and they must undergo relevant training courses so that, having taken those 6-8-month-old puppies, they could complete training courses for service-search dogs. During the courses, dogs receive specializations – investigation, search for drugs and explosives, detention of criminals. And then dog handlers and their four-legged partners are sent to the units for further service.”

Such thorough preparation ensures success in further service. One example is service dog Chuck, a German shepherd from the Motor Sich kennel. Yevhen Mykhailov and Chuck made their contribution to peace while participating in international peacekeeping operations in Kosovo. The dog was awarded a number of international combat awards and honors. Besides, Chuck  demonstrated real miracles of investigative and search work while serving in the Zaporizhzhia police. Chuck’s work became legendary among law enforcement officers.

One incident is noteworthy. The economic crime unit started investigating one of the heads of the Vasylivka agricultural technical school and caught him red-handed in his office. Although there were traces of marking paint on his hands, the police could not find the marked banknotes. The law enforcement officers turned to the dog handlers for help. Oleksandr Stupin, an inspector and dog handler, and Chuck went to the crime scene.

“The conditions for the dog’s work were bad,” Oleksandr Stupin recalls. – The summer was hot, the air temperature was about 40ºC in the sun. Besides, several hours had already passed since the crime was committed. However, Chuck confidently followed the trail and the entire path of the briber from the office in the opposite direction, led us through an abandoned building (the criminal turned out to be inventive and very professionally covered his tracks), took us to the construction site and clearly indicated a hiding place of the money.

The effective training of service dogs has become particularly relevant at wartime.

“A well-trained four-legged partner saves a fighter’s life,” Yevhen says. – It will help to detect and defuse an explosive device or a mine in advance, to clear the woods or buildings from enemies, protect against an attacker or a group of attackers. The dogs trained by us are currently serving in military units and at checkpoints, where they detect dangerous substances and weapons in a timely manner, help detain violators and saboteurs, and prevent attacks at night.”

Currently, Yevhen and his friends are taking care of shaggy fighters. Because, dogs need proper nutrition, protection means, treatment and hygiene, appropriate equipment. And we are talking not only about veterinary drugs, vaccinations, but also about… bulletproof vests. That’s why Yevhen has established the K-9 canine law enforcement unit assistance fund and has been cooperating with colleagues from other countries, in particular from Portugal, Latvia, Lithuania, and Poland.

“A dog handler with a service dog does not have to think about protecting his shaggy friend from fleas and ticks, about what to feed his four-legged partner. He has to go and work. And if they get into a dangerous situation and the dog may be injured, the dog handler must be sure that it will receive the appropriate medical care. And we will take care about everything else. Even about providing appropriate surgical care to the dog with the use of modern veterinary surgical equipment and tools,” Yevhen assures.

Dogs also receive the support of the world in the fight against the enemy. For example, police dog handlers from the USA handed over bullet-proof vests for service dogs to Ukrainian border guards. Abroad, service dogs of policemen, border guards, and sappers wear bullet-proof vests during their tasks. They protect the dogs against impact of debris, firearms, cold weapons, stones and sticks, and do not restrain movement.

The protection of four-legged employees in Zaporizhzhia is also reaching a new level – the Palyanytsia volunteer center presented the first sample of a Kevlar vest for dogs, who with the beginning of a full-scale russian aggression, together with their owners, dog handlers, have joined the ranks of our army. It is almost impossible to buy a bulletproof vest for a dog in Ukraine, so the volunteers of the Palyanytsia center have made a test sample free of charge. In order to sew more such vests for the four-legged defenders, the Palyanytsia center needs more materials. Volunteers are looking for Level II Kevlar plates.

“The war intensified rather than stopped our work in the TSOU kennel club, – Yevhen Mykhailov adds. – Our graduates are already serving at Dnipro checkpoints. Besides, the club also has a section of young dog handlers, so this work will be in good hands.”