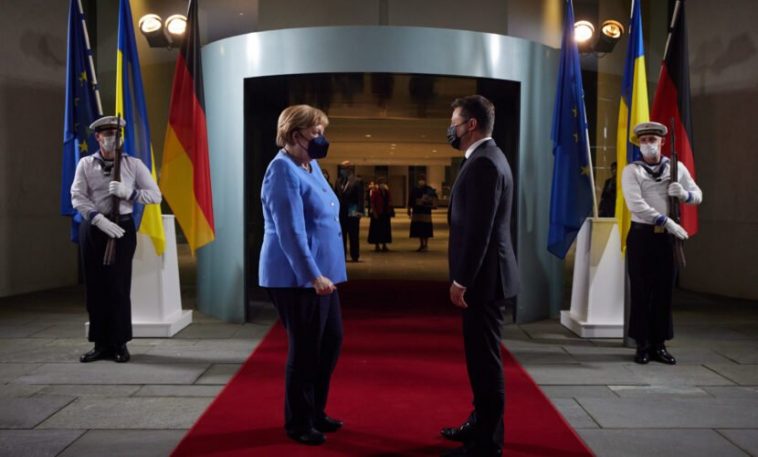 This week, two visits charted a course for the future of Ukraine. President Zelenskyi traveled to Berlin to meet with Chancellor Merkel. Later in the week, Merkel met with the U.S. President Joe Biden in the United States.

Zelenskyi’s position: Nord Stream 2 can be part of the Normandy discussion. During his meeting with Chancellor Merkel, President Zelenskyi was consistent in emphasizing that Nord Stream 2 is not just an economic challenge, but is primarily a security threat to Ukraine. What’s at stake is the security in the region – not maintaining the Russian gas transit through Ukraine will untie the hands of the aggressor.

“Nord Stream 2 going into operation is a potential threat to security in the region. Russian troops massed at our border further prove that,” Zelenskyi said.

The Ukrainian President underscored the security dimension and suggested to put Nord Stream 2 on the agenda of the Normandy talks. “We need to consider (the construction of Nord Stream 2) all together, with Germany, France and other participants of the Normandy format, as it is inseparable from Ukraine’s security,” Zelenskyi added.

Zelenskyi calls to increase pressure on Russia. Germany had been demonstrating unwavering support to the sovereignty and territorial integrity of Ukraine, and to the peace settlement efforts in Donbas, Zelenskyi said at the joint press conference with the German Chancellor Merkel in Berlin.

Zelenskyi thanked Germany and France for drafting the document entitled “Key clusters for implementation of the Minsk agreements”. “Ukraine has endorsed the draft, it is currently being considered by Russia. So far, only Russia has not accepted those steps set to end the war in Donbas,” Volodymyr Zelenskyi said. He also called to increase pressure on Russia over the implementation of its commitments toward peace settlement.

“All countries, we all need to put pressure on Russia to hold a meeting in the Normandy format, end the war in eastern Ukraine, and restore sovereignty over our illegally occupied territories,” the Ukrainian President said. Zelenskyi would welcome the U.S. President Biden joining the Normandy talks.

A surprise meeting between Zelenskyi and Merkel’s likely successor. The visit of Zelenskyi was to start on July 12, the office of the German Chancellor said. But the Ukrainian President arrived a day earlier, on July 11. His meeting with Armin Laschet, the governor of the German state of North Rhine-Westphalia in Berlin on July 11 was a surprise.

Laschet is one of Germany’s 16 state governors. He is also the conservative’s (CDU/CSU) candidate for chancellor. Laschet has all chances to succeed Angela Merkel as German Chancellor.

As the authority over the Normandy format transits from Merkel to Aschet, Zelenskyi seeks to advocate Germany’s involvement in the Minsk process. He also wants to present to Laschet his ideas on reshaping the talks. While Kyiv would welcome the U.S. participation, Berlin underscores that when it comes to the implementation of the Minsk agreements, Germany and France always consult the EU partners, G7 member states, and Washington directly.

Germany’s position on Nord Stream 2. Halting the construction of the gas pipeline is unlikely, representatives of the German government made it clear ahead of Zelenskyi’s meeting with Merkel on the evening of July 12. At the same time, after Nord Stream 2 goes into operation, the Russian gas transit to Europe through Ukraine is to be maintained, they added.

Answering a journalist’s question, the spokesperson of the German federal government Steffen Seibert reminded that Russia and Ukraine signed the gas transit agreement under the mediation of Germany. As the deal expires in late 2024, he said Germany will take action to have the agreement extended by 2034.

Also, representatives of the German government hinted at asymmetric solutions designed to compensate for economic losses and elevated security risks facing Ukraine. Some of the possibilities include making investments into new power plants, hydrogen production, and renewable energy. Still, that will not address the security threats.

Merkel-Biden meeting. Angela Merkel’s visit to the U.S. culminated with the release of the Washington declaration, a joint U.S.-German document charting bilateral cooperation and strategic principles. Declaration signatories vow to “defend the rights and dignity of all individuals, and counter injustice and inequality wherever it occurs”.

In the declaration, the U.S. and Germany also commit to defending “an open world”.

As they spoke at a news conference, the two leaders mentioned Nord Stream 2 and reiterated support to Ukraine. The U.S. will continue to support the territorial integrity and Euro-Atlantic aspirations of Ukraine, President Joe Biden said.

“Russia must not be allowed to use energy as a weapon to coerce or threaten its neighbors,” President Biden said at the news conference.

“Nord Stream 2 is an additional project and certainly not a project to replace any kind of transit through Ukraine,” Chancellor Merkel said.

The gas pipeline Nord Stream 2 should not replace the transit of gas flowing through Ukraine, the German Chancellor reiterated.

“Our idea is and remains that Ukraine remains a transit country for natural gas,” Merkel proceeded. “We will be actively acting should Russia not respect this right of Ukraine that it has as a transit country”.

“By the time I became President, it was 90 percent completed. And imposing sanctions did not seem to make any sense. It made more sense to work with the Chancellor on finding out how she’d proceed based on whether or not Russia tried to, essentially, blackmail Ukraine in some way,” he added.