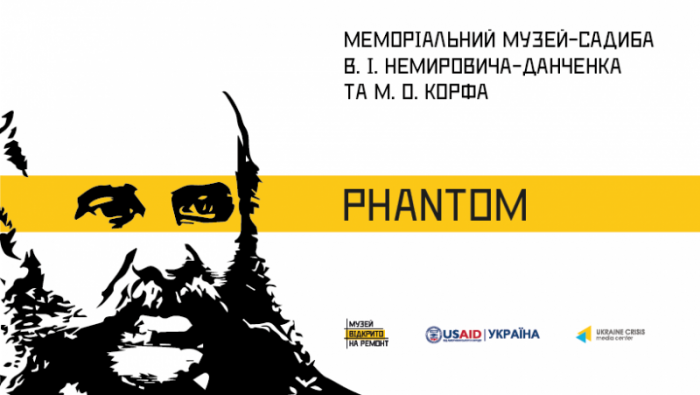 The “Phantom” project will be presented at the Mansion museum of Volodymyr Nemyrovych-Danchenko and Mykola Korf (Neskuchne village, Nemyrovycha-Danchenka str. 46) on February 19 at 15:00. “Phantom” is a mysterious name of the project implemented in Neskuchne village, Donetsk region, in the framework of the project “Under construction: Museum open III” run by Ukraine Crisis Media Center with the support of the United States Agency for International Development (USAID).

The main idea of the “Phantom” project is to create “phantom life” – an exposition in the old part of the building to revive the school of Mykola Korf’s times. Participants are invited to analyze and assess the impact of Korf’s work on their life and feel part of the story. They are also encouraged to form an active life position, self-identity and become patriotic. The project is to also help consolidate and unite around the liberal and educational ideas of Korf the communities of towns where Korf actually worked – in Donetsk, Zaporizhzhia, Dnipro and Kherson regions.

Baron Korf saw his patriotic responsibility in educating common people, so he chose education as the primary activity of his life. “Only an educated person can be truly free,” Mykola Korf used to say during the years when Ukrainians were being liberated from serfdom. In mere five years (between 1867 and 1872) he opened about 100 schools, personally inspected them, trained teachers, held exemplary lessons, founded a training course and training events for teachers, set up libraries at schools and was of the opinion that children should be taught in their mother tongue.

After his death the first school commemorating him and named after him was opened in the mansion. Since 1895 when the school was founded it has lived through many changes. Over the last decades part of the building has been declining gradually turning into a ghost, same thing has been happening to the figure of Mykola Korf in Ukraine’s historic and pedagogical environment.

Project organizers invite to come and see the “Phantom” project and take part in the events commemorating Mykola Korf and his 185thbirth anniversary.

The Museum’s address: the Mansion museum of Volodymyr Nemyrovych-Danchenko and Mykola Korf is a branch of the Donetsk regional local history museum located in Neskuchne village in Donetsk region, on Nemyrovycha-Danchenka str. 46.