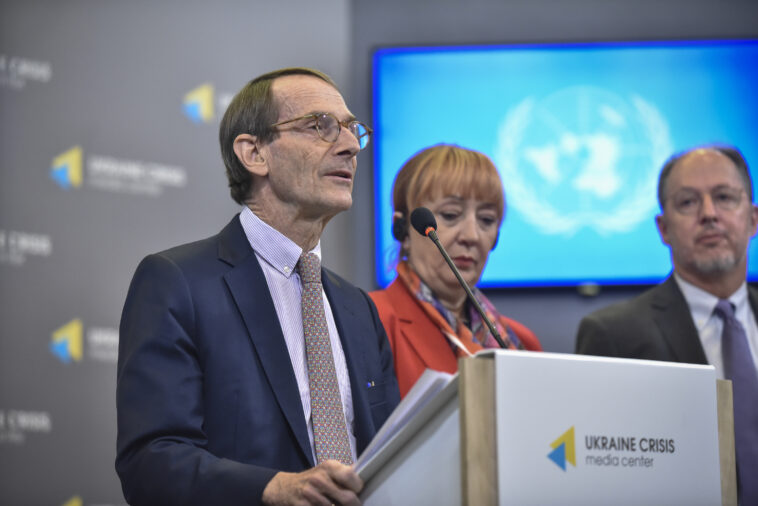 On June 15, in the press center of the Ukraine Crisis Media Center, Members of the UN Independent International Commission of Inquiry on Ukraine gave a press conference at the conclusion of their first visit to Ukraine.

The Commissioners travelled to Ukraine from 7 to 16 June to meet victims and witnesses of alleged human rights violations, including internally displaced people, and representatives of the Government, Parliament, and the judiciary. They also met with civil society organisations and United Nations agencies. In addition to visiting Kyiv, the Commissioners undertook field visits to Lviv, Irpin, Bucha, Kharkiv, Sumy, Trostyanets, and Okhtyrka.

Erik Møse, Chairperson of the Commission of Inquiry on Ukraine:

On behalf of the Commission of Inquiry for Ukraine, composed of Erik Møse (chair), Jasminka Džumhur and Pablo de Greiff, I want to welcome you to this press conference at the end of the Commission’s first visit to the country.

The Human Rights Council set up the Commission to investigate alleged violations and abuses of human rights and violations of international humanitarian law, and related crimes in the context of the Russian aggression against Ukraine, with a view to ensuring accountability. On 12 May 2022, the Human Rights Council also requested the Commission to address events that took place in late February and March in four specific regions of Ukraine. Consequently, the Commission has, during this ten-day long visit to Ukraine given priority to Kyiv city, Bucha, Irpin, Kharkiv, and Sumy.

In Kyiv, we met with representatives of the Ukrainian parliament, several ministries, and the Prosecutor General, whom we had also met previously. The purpose of these encounters was to exchange information of relevance to the Commission’s mandate and to facilitate future investigations. We also met several Ukrainian NGOs that provided valuable inputs to our work.

During the visits to Bucha, Irpin, Kharkiv and Sumy, the Commission met with local authorities as well as civil society organizations, both of which provided significant assistance. Furthermore, the Commission received accounts from individuals who shared their painful stories.

Although far from fully staffed, the Commission’s first visit was very productive. At this stage we are not in a position to make any factual findings or pronounce ourselves on issues of the legal determination of events. However, subject to further confirmation, the information received and the visited sites of destruction may support claims that serious violations of international human rights law and international humanitarian law, perhaps reaching war crimes and crimes against humanity, have been committed in the areas.

In Bucha and Irpin, the Commission received information about arbitrary killing of civilians, destruction and looting of property, as well as attacks on civilian infrastructure, including schools. In Kharkiv and Sumy region, the Commission observed the destruction of large urban areas, allegedly as a consequence of aerial bombings, shelling, or missile strikes against civilian targets.

Jasminka Džumhur, Member of Commission of Inquiry on Ukraine:

The Commission also had the opportunity to listen to internally displaced persons, including those coming from the East of Ukraine, who referred to displacement of people. Testimonies also included stories of destruction of civilian property; looting; the confinement, mistreatment, and disappearance of civilians, as well as reports about rapes and other forms of sexual abuse. The Commission will examine all these allegations further.

The Commission is concerned with the impact of the war on children. It considers it necessary to investigate further reports about the alleged transfer of children placed in institutions in the temporarily occupied territories to the Russian Federation as well as information about expedited citizenship and adoption processes for some of these children. In Ukraine, many displaced children have been separated from families. The physical destruction of schools and their use for the accommodation of IDPs raises challenges concerning the children’s access to education.

The Commission has previously stated that it would adopt a victim-centred perspective on its work, and that it would be faithful to its mandate, which asks it to make proposals regarding accountability. Criminal accountability is important, but so are other forms of accountability, including those that enhance the possibility that victims will be able to reconstruct their lives.

The Government of Ukraine is making efforts to meet the diverse needs of victims. While there are areas where greater institutional coordination is probably desirable, doing so while the conflict is ongoing poses particular challenges.

Pablo de Greiff, Member of Commission of Inquiry on Ukraine:

The first visit of the Commission will be followed by visits to other parts of Ukraine before the Commission’s oral update to the Human Rights Council in September this year.

We will continue with the process of collecting evidence that may serve accountability purposes; whenever possible identifying individuals or entities, and will pay special attention to violations of a sexual nature, of the rights of children, the elderly, and other vulnerable populations.

The Commission will carry out its work independently, neutrally, and objectively, examining violations and abuses regardless of the identity of the perpetrator. We hope that all parties to the conflict will assist the Commission in its work.

Finally, we would like to express our gratitude to the Government of Ukraine for facilitating our mission, to Ukrainian civil society organisations, victims and witnesses, and to the various United Nations agencies for their kind collaboration. The Commission also wants to thank the Office of the High Commissioner for Human Rights and the United Nations Resident Coordinator in Ukraine for their indispensable collaboration to the visit.

More information on the Commission of Inquiry on Ukraine you can find here.

More photos from the press conference are available here.