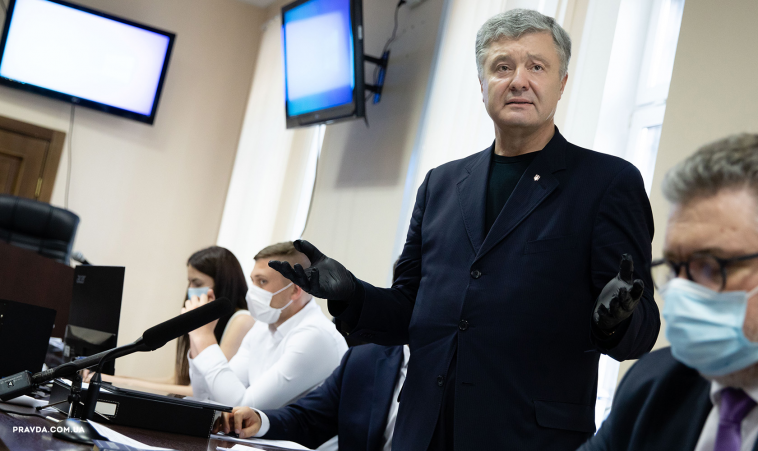 What happened. On July 8, the Pechersk district court of Kyiv held the final hearing that lasted nearly six hours, addressing the request of the Office of the Prosecutor General for selecting a pre-trial measure for Petro Poroshenko (in the proceeding on appointment of Serhiy Semochko as Deputy Head of the Foreign Intelligence Service).

In the afternoon, one of Poroshenko’s lawyers Illya Novikov posted on Facebook screenshots of the documents revealing that one of the proceedings (re “Kuznia na Rybalskomu” factory) was closed. He said the decision was made by head of the investigation group Oleh Koretskyi.

Novikov also released a video in which Koretskyi, head of the third department at the Chief Investigation Directorate of the State Investigation Bureau, explains his motives. The investigator said his group was subject to pressure being forced to investigate the proceedings against Poroshenko despite insufficient elements of crime.

What did the investigator report? Koretskyi said: “You start investigating as usual, by law, then some people, ‘Kharkivites’, come and start giving weird orders. You say: ‘There are no elements of crime, guys. There aren’t any! Let’s make lawful decisions.’ They say, you should leave, because there is no place for you. You don’t suit them (…). Then I decided that I was ready to talk to the press.”

Following the sensational statement by Koretskyi, Poroshenko’s defense and the politician himself called upon the Pechersk court to invite the investigator to testify.

“I have personally signed off about a dozen of notices signaling crime and violations that (Koretskyi’s) group made during investigations of all the 20 criminal proceedings. I can officially emphasize that, luckily, I have not met Koretskyi for about three months now,” Poroshenko added.

When addressing the judge Serhiy Vovk, Poroshenko referred to Koretskyi’s revelations as “extremely important” saying “they might grow into a political crisis, should it be proved (…) that orders to jail Poroshenko are coming not only from Yanukovych’s lawyer Babikov, but that Babikov is tasked by Venediktova, the Office of the President and Mr. Zelenskyi.”

Soon after the request to invite Koretskyi to testify in court was presented, another break was announced and, after the hearing resumed, it abruptly ended. Despite the prosecution had the request approved to extend the investigation until October 2020, suddenly announced that the pre-trial investigation was finalized and there was no need to choose a pre-trial measure for Poroshenko.

Finally, the judge Vovk ruled to drop the request by the Office of the Prosecutor General, so that pre-trial measure for Poroshenko was not chosen.

Besides, the proceeding on Semochko’s appointment is considered hopeless. Koretskyi named it among the proceedings having no elements of crime. The pre-trial measure for Poroshenko was to be chosen in this proceeding.

Koretskyi said that the Prosecutor General Iryna Venediktova and her “Khrakiv team” are putting pressure on the State Bureau of Investigation. He mentioned “weird orders” by “Kharkiv people” in the video released by Illya Novikov. In an interview, he was asked to comment if Venediktova (native of Kharkiv and former acting head of the State Investigation Bureau) preserved influence on the Bureau and “her Kharkiv team”.

The chief investigator said the Bureau demanded that investigations against Poroshenko are held at any cost, regardless of what the investigators find.

“There are reasonable terms when all possible investigative actions are completed and a decision needs to follow. Either charges are brought, if you find there are elements of crime, or you decide to close the criminal proceeding. I was told, it should not be closed down and I should continue investigating. Investigating what and what for? It all peaked three months ago when proceedings started being taken away from me because of my position,” Koretskyi said.

What the State Investigation Bureau says. On the evening of July 8, the State Bureau of Investigation reacted to Oleh Koretskyi’s sensational reports, issuing a statement.

The Bureau calls investigator’s revelations a speculation, “Oleh Koretskyi plans to resign from the Bureau” allegedly due to “the leak of classified information pertaining to criminal proceedings” confirmed by internal investigation involving a lie detector test, the statement reads.

Facts cited by Koretskyi “are not true and are politically motivated,” while some of the public statements of the investigator “contain elements of a crime, particularly, disclosure of pre-trial investigation information,” the State Investigation Bureau proceeds.

Koretskyi acted in the interest of Poroshenko, the Bureau implied without naming the fifth President of Ukraine. The conclusion is based on the choice of media whom Koretskyi decided to talk to – Glavkom, Censor.net and Priamyi TV channel.

The Office of the President refrained from commenting on the scandal.