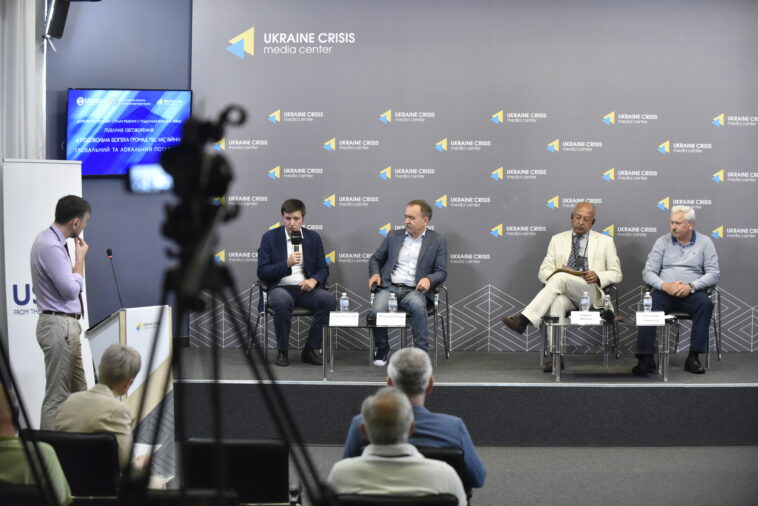 Kyiv – On July 21, 2022, at the Ukraine Crisis Media Center, representatives of the Government of Ukraine, local authorities, and experts discussed the issue of food security of municipalities during the war from global and local perspectives. The discussion was co-organized by the Ministry of Communities and Territories Development of Ukraine and the USAID HOVERLA Activity.

Ukraine’s contribution to the world food market in 2021 was equivalent to providing food for 400 million people. The full-scale invasion of Ukraine by the Russian Federation disrupted the systems of production, processing, and supply of food, in particular, to the international market. Due to the approach of winter and the risk of undermining the sowing season of winter crops, the question of creating food stocks arises. The food security not only of Ukraine but also of other countries depends on this.

“We are very proud to see how municipalities across Ukraine are working hard to ensure the food security and well-being of their residents even in these difficult times. Local leaders struggle to accumulate food reserves for the citizens including internally displaced persons as well as maintain supply chains and support the local agricultural manufacturers. And it is crucial to work in partnership with the Government and international projects to jointly find solutions to these challenges.USAID HOVERLA Activity is delighted to contribute to the dialogue between various institutions to strengthen the capacities of local self-government to ensure food security in their communities and to support each other in this situation. We will continue supporting municipalities in these efforts,” emphasized Gabriel Abraham, the Chief of Party  of the USAID HOVERLA Activity.

The communities today, besides the responsibility to fulfill their direct duties, have to cope with the new challenges brought by the war. Municipalities are a reliable rear of the army that defends Ukraine.

“Communities face many complex challenges that we did not consider before the war. At the same time, they became active centers of resistance against the occupiers and are showing courage to this day. Thanks to the resilience of communities, perseverance, and the work of all services and local authorities, it is possible to overcome new challenges and ensure the functioning of the social services system. One of the most crucial issues that many territorial communities are currently facing is agricultural production. Therefore, they should direct attention towards ways to support local businesses, develop local production and recycling, and involve citizens in these activities to strengthen food security,” stressed Viacheslav Nehoda, Deputy Minister of Communities and Territories Development of Ukraine.

The policy of the Government of Ukraine in the field of ensuring food security adjusting to  the current challenges. In particular, a plan to ensure food security under martial law was adopted. It is a set of actions that involves monitoring the state of food security and agricultural infrastructure as a whole, providing support to food producers, providing targeted assistance to socially vulnerable categories of the population, and centralized control over product prices.

“The Government began implementing measures to ensure food security from the first days of the war. This plan is an umbrella uniting everything that has been developed since February 25,” explained Taras Vysotskyi, the First Deputy Minister of Agrarian Policy and Food of Ukraine.

Representatives of municipalities during the discussion said that food security programs were adopted in the communities. They, in particular, are trying to support farmers who plant crops, provide the necessary assistance to internally displaced persons, and, if possible, equip places of residence for them.

Ihor Hrynkiv, the Head of Zolochivska community of Lviv region noted that to strengthen the food capacity, the community transferred the land in small pieces for the use of local farmers, who began to provide the community with food. They are currently clearing land that has not been used for years and preparing it for sowing. Afterward, the harvest will be processed into flour in local mills and residents will be provided with products. The community also helps the namesake community from Kharkiv region, which is systematically shelled. Now the community is looking for partners to arrange housing for people who have lost their homes.

Viktor Sushchyk, the Head of Vyshnivska community of Volyn region stated that the village council leased 520 hectares of mediocre quality land, but farmers were able to cultivate and harvest it. Since Vyshnivska community is located nearby the border with the Republic of Belarus, the authorities pay special attention to security issues. The community is currently working on a food security program.

Serhii Mazur, the Head of Baltska community of Odesa region stressed that this year’s yield is 70%, compared to last year. The closure of sea routes and the impossibility of export pose significant risks for conducting agrarian business. However, the community manages to support the defenders of Ukraine and residents of the de-occupied territories. Serhii Mazur said that the community has already allocated about UAH 7 million from the local budget for the purchase of products and has produced hundreds of tons of food products and delivered more than 200 tons of drinking water. There is not a single hectare of land left in Baltska community that has not been sown. The land of the former collective farms was transferred for use with one purpose – to get a harvest. Currently, the community is working to strengthen its capacity in the processing of grains into flour, in particular, to increase the production capacity of existing agricultural enterprises and create new ones.

However, local farmers have a problem with selling at prices that will allow them at least to finish the harvest without debt. Oleksandr Hrytsaienko, head of Lubenska community of Poltava region, explained:

“We are grateful to the Ministry and the Government for making prompt decisions. Nevertheless, today the main thing for agricultural producers is not only to grow products but also to sell them at prices that would make it possible at least to return the money spent on these products and then continue to prepare for winter sowing and harvesting of late crops. The Government and the state should be a player in the market of agricultural products and try to buy them at the maximum prices that they can afford. That would make ensuring food security at the state level possible. And what we can do at the level of local self-government – adopting programs, buying and stockpiling – we do.”

This event is organized by Ukraine Crisis Media Center within the project “Communication support to Ukraine’s territorial communities for better coordination and outreach” that is made possible by the United States Agency for International Development (USAID) and the generous support of the American people through USAID HOVERLA Activity. The contents of this event do not necessarily reflect the views of USAID or the United States Government.