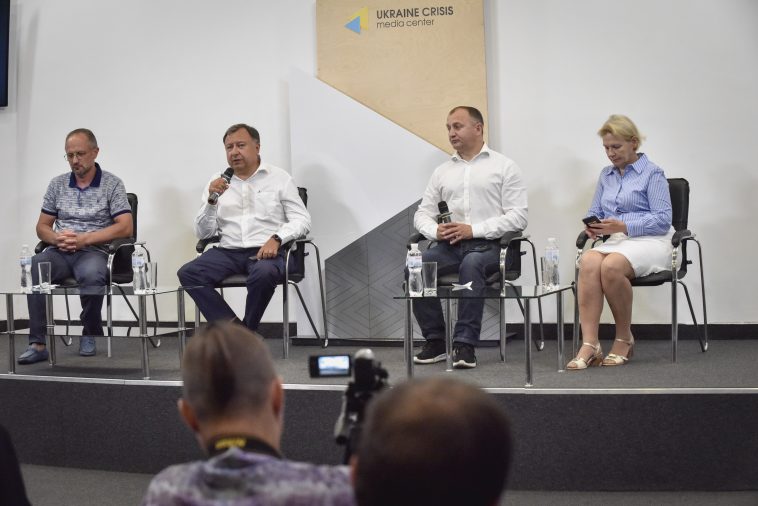 Ukrainians took to heart the presidential election in Belarus as well as the protests that erupted immediately after the results were announced. To many, the violent dispersal of the mass protests in Belarus reminded of the Maidan revolution of 2013-2014, when Ukraine ousted President Yanukovych and got rid of his corrupt power system.

Ukraine Crisis Media Center organized a discussion putting a spotlight on Belarus events. We herewith quote its key points, also citing official statements by the President of Ukraine and the majority party “Servant of the People”.

Ukraine’s official reaction. In his commentary on the Belarus election and night-time police violence against the protesters, President Zelenskyi seemed restrained. He said not everyone in Belarus accepts the official election results and called to guarantee freedom to the people.

Oppositional media outlets and Telegram channels in Belarus took it as a gesture of support for local opposition expressed by Zelenskyi. “Our neighbors, Belarusians are living through uneasy times. They are trying to define the direction for their future development, which is a very difficult thing to do. It is obvious that not everyone in the country agrees with the preliminary election results that were announced,” Zelenskyi said in the statement.

“Legitimacy exclusively results from public trust, from public trust only. Massive doubts are a direct way towards violence, conflict and mounting public protest. (…) Only a wide dialogue will pave the way out of the crisis situation to the citizens of the Republic of Belarus, allowing for an honest discussion on further steps and formats to interact with the civil society,” President Zelenskyi added.

Volodymyr Zelenskyi also called on the Belarusian authorities to respect the democratic standards of the civilized world and “guarantee in full the rights and freedoms to its people.”

Another ‘Servant of the People” MP, Oleksandr Dubinskyi also congratulated Lukashenko. An identical statement that repeats that of Dubinskyi word by word, was released by Vadym Rabinovych, one of the leaders of the pro-Russian “Opposition Platform – For Life” (Opozytsiyna Platforma – Za Zhyttia) party. Alongside Viktor Medvedchuk, Rabinovych is a frequent traveler to Moscow where he meets Russia’s ruling elite.

Lukashenko was also congratulated by the leader of Ukrainian communist party Petro Symonenko when the latter appeared as a guest in a television show on a state channel in Minsk.

Meanwhile, a group of the “Servant of the People” liberal MPs vowed support to the Belarusian people and their right to free and fair election.

“We express our support to the will of the Belarusian people to elect representatives including the President in a lawful democratic way,” the statement released by the deputy chief of faction Yevhenia Kravchuk reads.

Experts: intensity of protests in Belarus may decline. Participants of the discussion at Ukraine Crisis Media Center said chances are that the protest potential of the Belarus society can decline after Lukashenko’s opponent Sviatlana Tsikhanouskaya left the country. Still, according to Alena Talstaya, co-chair of “Razam” solidarity movement reassured that protesters are united not by the personality of the opposition candidate, but by the national idea. “Political ground in Belarus was cleansed and the democratic opposition was paralyzed. The candidates that presented themselves for this election, were artificial and, under the normal political conditions, people would not follow the persons like Babaryka or Tsepkala who are not hiding their links to Russia. The figure of Tsikhanouskaya played a uniting role, her statements gave people hope for a lawful solution. Right now it’s not Tsikhanouskaya though that unites the people, but the national idea. It is not important anymore what she is saying. Everything she was doing fell within the Kremlin’s schemes of political technologies,” Talstaya said.

Siarhej Sys, member of the “Viasna” human rights organization, said some companies in Belarus went on “Italian-like” strike. “As of today we are aware of 260 injured protesters, while real numbers are unknown. The situation is constantly changing. We now need the support of our nearest neighbor and friend – Ukraine, like never before. There is a risk that the protest potential will be decreasing, but we learned that a series of companies dared to strike. Workers go to work, but try to refrain from actual working duties,” Siarhej Sys said.

Ukraine must support the Belarusian people. “We must be supporting not the President of Belarus, but the Belarusian people that are fighting for their right to have a democratic choice,” said MP Mykola Knyazhytskyi (“European Solidarity” faction), member of the inter-faction group “For Democratic Belarus”, during the discussion at Ukraine Crisis Media Center. “Reaction of some Ukrainian politicians and media to the situation in Belaus is weird. They think that Lukashenko is balancing between the Kremlin and Europe, and that his presidency is beneficial for Ukraine. But we have to be guided by principles. We are a people that got its freedom through fighting in Maidan and the battlefield of the Russo-Ukrainian war, we have to understand its price. (…) Being the people who stand for European values cemented in the Constitution that stipulates the course towards the European and Atlantic integration, we cannot close our eyes on unacceptable anti-democratic incidents taking place in the neighboring country,” Knyazhytskyi added.

Ukraine can initiate a meeting of the UN Security Council. Roman Bezsmertnyi, former Ambassador of Ukraine to Belarus, said Ukraine has to immediately initiate a discussion of the situation in Belarus at the UN Security Council and the Council of Europe, as well as call an OSCE meeting. He added that Ukraine needs to change the migration policy for Belarus and open the border by renewing the legal basis, steps within the area of responsibility of the government and the President. “The Kremlin needs to have a null person in Belarus so that it can exercise full control over the territory. Lukashenko is not the legitimate president-elect, it is not possible that a person enjoying 80 per cent support is protested by such a large number of people. It can be that the Kremlin is ready to annex Belarus and deploy the Russian troops to Belarus, which means the start of a continental war. Next to suffer will be the Baltic states and Ukraine,” Bezsmertnyi said.

Belarus needs information support. Discussion participants said the Belarusian society needs a hand in spreading the word about the real state of play in Belarus.

“The first thing we need is information support, (to articulate) that the situation is not as good as the television presents it. For many years authorities have been maintaining the picture that Belarus is a flourishing country with good roads and efficient companies. They did it so that no one pays attention to us. We ask journalists from across the world to help us spread the word as much as possible about the current situation there,” called Olena Filatova, video blogger from Belarus.