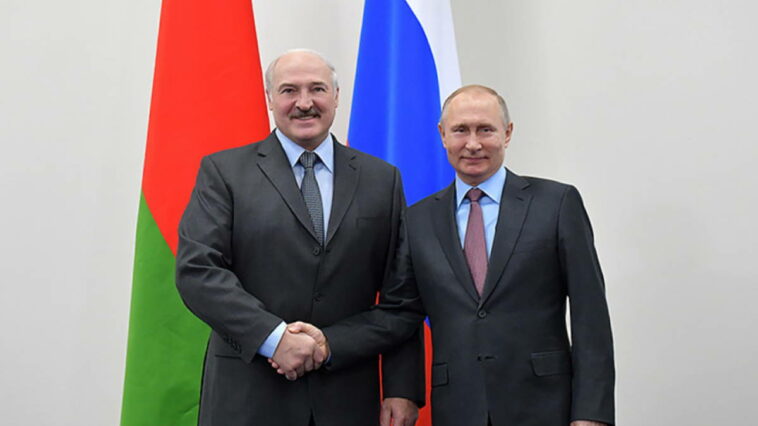 Russian President Vladimir Putin and self-proclaimed Belarusian President Alyaksandr Lukashenka approved the “integration decree” during a virtual meeting of the bilateral Supreme State Council for the Union State. The agreement provides for 28 integration programs. Here’s what it looks like.

The agreement was signed on Russia’s national Unity Day. Putin was in annexed Sevastopol. Ukraine’s Ministry of Foreign Affairs protested the visit.

Putin said the integration decree is a step forward that would benefit people in both states and “is not linked to domestic politics”.

Ahead of the signing ceremony Lukashenka said: “I sign off on it. I see your (Putin’s – edit.) signature on the decree, and signatures of members of the Supreme State Council. I will sign the decree, if you don’t object. But we’ll share the responsibility, that’s not just me.”

The programs agreed in September lead to the creation of a monetary union, a common payments area and a common system of taxation. The programs also aim to unify the laws of the states, create a single energy market, and develop common approaches to industrial and agricultural policies.

The decree lays the foundation for the immigration policy of the Union State. Putin and Lukashenka also adopted a joint military doctrine.

“We will together resist any attempts to interfere in the internal affairs of our sovereign states and Russia will of course continue to provide assistance to the brotherly Belarusian people — there is no doubt about that,” Putin said.

No further details were provided on 28 integration programs and implementation plans.

Long story of integration. Putin and Lukashenka agreed on 28 programs during a meeting in Moscow on September 9, 2021.

The story is much longer than that. Russia and Belarus have talked integration since 1999. In 2019 and 2020 they discussed 31 roadmaps that aim at increasing integration of the two economies. Draft roadmaps were never published. Which of the 31 programs were adopted, is not known either. Political integration and supranational institutions are not part of the programs, media reports said.

Views from Ukraine. Ukraine will get another thousand kilometers, source of danger along its northern border if Russia swallows Belarus, the Foreign Minister of Ukraine Dmytro Kuleba said speaking on a television program Freedom of Speech (Svoboda Slova) in September.

“In order to demonstrate serious intentions of integrating into the Union State, they bring in the narrative that goes beyond the 28 programs of economic integration and outlines joint defense. We have to monitor closely the exercise Zapad 2021, as the scenarios practiced there carry serious risks. If Russia swallows up Belarus, in one form or another, we will get another thousand kilometers of danger to our sovereignty and territorial integrity,” Kuleba said.

Lukashenka pretends he is in control of the situation, but the depth of integration is decided upon by the Russian president, the Foreign Minister added.