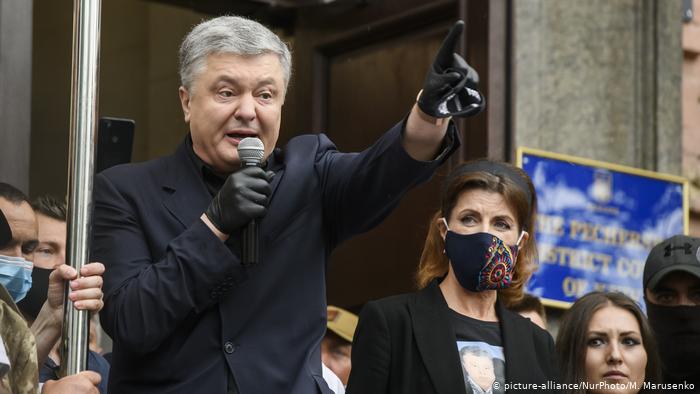 During the hearing on June 18, the court was to choose a pre-trial measure for Petro Poroshenko. Initially, the Office of the Prosecutor General requested detention or a UAH 10 million bail (approx. USD 374 thousand), but later opted for personal recognizance. The proceeding concerns Serhiy Semochko, appointed to the position of the Foreign Intelligence Service deputy head by then President Poroshenko. Two years ago Semochko was charged with high treason. We look at the details of the proceeding and developments in court.

This week’s developments of the case. On June 18 Petro Poroshenko arrived in court to a hearing that was to define the pre-trial measure for him. Two days earlier his father, Oleksiy Poroshenko died at the age of 84. The funeral is to take place in the coming days.

The Criminal Code foresees a possibility of having a court hearing postponed in the event of death or funeral of the next of kin. Supporting documents need to be presented to court. However Poroshenko’s lawyers did not file a respective motion. Instead, the funeral was postponed. It will take place on June 20, the co-chair of the parliamentary faction “European Solidarity” (Yevropeiska Solidarnist) Iryna Herashchenko told Hromadske.

“Despite it clearly being political persecution, and despite the fact that last night Petro Oleksiyovych’s father passed away, he will show up on Thursday. The hearing will happen. It is a matter of principle,” Petro Poroshenko’s lawyer Illya Novikov told at a briefing on June 16.

Politically unreasonable. Iryna Venediktova denies that the proceeding against Poroshenko is political. However the choice of the case by the State Investigation Bureau and the Office of the Prosecutor General to indict Poroshenko, surprises even his opponents. If found guilty of “issuing an unlawful order”, Poroshenko faces seven to ten years in jail.

“Somehow the choice of the proceeding against Poroshenko fell upon the most hopeless, illogical and hard-to-prove criminal case possible that is hardly a public danger. I don’t believe that the court will arrest him or assign a forfeit in this proceeding, not that it can be possible by the laws,” commented Andriy Portnov, deputy head of the Presidential administration during Yanukovych’s presidency.

This case, he said, only makes everyone, especially leaders of foreign states, call it political repressions. Especially in the view of the fact that the key actor of the proceeding, Yegor Bozhok who chaired the Foreign Intelligence Service and actually appointed Semochko as his deputy, was not chosen a pre-trial measure. Moreover, despite being indicted, he works as Deputy Minister of Foreign Affairs. He assumed office during the presidency of Volodymyr Zelenskyi.

Proceedings against Poroshenko grow in number. According to Iryna Venediktova, it’s Andriy Portnov who filed the majority of claims against Petro Poroshenko to the State Investigation Bureau. In August 2019 the claims were 12, they had Poroshenko quoted as witness, by now the cases have doubled. Losing track of the cases is quite easy, even for those who are closely following the attempts to indict Poroshenko. The list of the cases against Poroshenko even features proceedings on hooliganism. Lawyer Illya Novikov said that an unnamed claimant complained back in February 2019 about Poroshenko’s alleged hooliganism during his work trips to Zaporizhzhya and Chervonohrad. No further details are available on that.

“It is illustrative of the general trend, that the Office of the Prosecutor General is ready to start a proceeding pursuant to whatever episode, in the hope that they will somehow succeed,” Novikov told DW. He is aware of 27 criminal proceedings that feature Poroshenko, but there are more proceedings that are “unknown”.

The Tomos case. On June 18, before the court hearing began, Poroshenko said that another case was started against him on charges of “fueling religious hatred”, referring to the unified Orthodox Church of Ukraine getting Tomos. The State Investigation Bureau confirmed that the proceeding was started by the Security Service of Ukraine in 2019. At the same time, the State Investigation Bureau said it does not intend questioning legitimacy of the setup of Ukraine’s Orthodox Church, adding that the case was started based on the claim filed by the Head of the Ukrainian Orthodox Church of the Kyiv Patriarchate Filaret in 2019.

What did Poroshenko say in court? Petro Poroshenko called on the Pechersk court to send back to the Office of the Prosecutor General the “trash” he is attempted to be charged with.

Poroshenko also said that he understands that the prosecution changed the request from pre-trial detention to personal recognizance in order to limit his travel making it not possible for him to “mobilize the world to protect Ukraine”. The politician called the 27 cases against him unlawful and the charges brought against him by the Office of the Prosecutor General, null. The former President addressed the actual head of the state separately, emphasizing yet again that he and his team are not Zelenskyi’s enemies and warned him against illegal decisions.

“Volodymyr Oleksandrovych, no one fears you, neither in this room, nor in the street, nor (anyone fears) your orders to jail Poroshenko. It is a crime, in Ukraine, in Europe and in the rest of the world.”

What’s next? The court rescheduled the hearing to consider a pre-trial measure for Poroshenko to July 1.