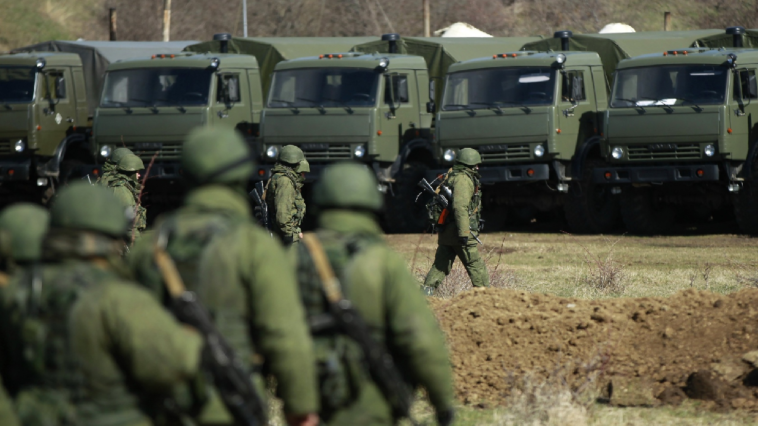 As Russian Federation amasses its military presence on Ukrainian borders, the Kremlin, echoed by Russian media, repeats three rather contradictory claims – that the troop buildup is simply “preparations for joint military exercises”, “internal affair”, but, above all, that it is a justified response to “aggressive actions of NATO and Ukraine”. Such “response” includes 127.000 troops on the border with Ukraine and expanding Russian military presence in Belarus, such as sending 12 SU-35 fighter jets, two divisions of S-400 air defense systems, and a division of Pantsir-S air defense systems.

Widely seen as preparation for a large-scale military intervention, it does not just create a high-risk possibility of renewed hot phase of the war that started in 2014. There is also a wide range of other scenarios to consider, from attempts to block Ukraine’s access to the Black and Azov seas in the south to trying to expand the occupied territories in the east of the country, where Russia now reigns over two puppet republics. One thing that remains unchanged in all of them — active disinformation and shifting the blame.

However, with an additional possible front forming in the Kremlin-dependent Belarus that includes direct threats with aggressive joint defense and doing everything “to take Ukraine back” (whatever that means) from Lukashenko’s authoritarian regime, mantra about aggressive Ukraine is anything but convincing. Having obtained the predictable support of Belarusian authoritarian regime while having about 35.000 troops in the occupied Ukrainian Donetsk and Luhansk regions and Crimean peninsula, Russia tries to implement its strategy for encircling its neighbor.

Blaming Ukraine for Defending Its Sovereignty

Russia’s “security guarantees” for NATO including Ukraine’s non-accession to the alliance and deploying military forces and weaponry from all the countries that joined NATO after 1997 showed Russia’s desire to gain control over the entire Azov-Black Sea region against all odds.

Russia is intended to achieve different disinformation strategies with cross purposes for Ukraine and the West, trying to spread panic in the first case and pretend to be deeply concerned about Ukraine’s “aggressive intentions” in the second one. In an attempt to sow fear and demoralization among Ukrainian citizens, Russia called on its good old methods, such as cyberterrorism, standing behind about 70 attacks on Ukrainian state services, and intimidation, such as massive pseudo-mining of Ukrainian educational institutions.

Raising tensions, undermining trust and spreading doubt is essential for Moscow to undermine defense capabilities and national resilience in Ukraine. In such circumstances, the ceaseless work of the local Kremlin’s agents of influence is an increasing security threat.

The Art of Depreciation

The Kremlin systematically portrays Ukrainian Armed Forces as “weak” and “demoralized” to undermine the high level of trust (which, as of 2021, was 72% compared to 66% in 2020). This message is echoed by the local pro-Russian actors, describing the Russian military escalation as a way of distracting attention from internal problems in Ukraine, promoting the “eternal” narrative about “external governance”. This way the Kremlin is struggling to undermine not only Ukraine’s faith in its strength and international support but the very concept of trust to governmental institutions among civilians.

Pursuing  hopeless messages that Ukraine will never be a NATO member and the West is just “lulling Ukraine with false promises” to further use it as a “testing ground” and a “bargaining chip” in its war with Russia, Russian Federation and its proxies also try to strengthen the idea of great Russia and weak West bending to it.

Thus, both Russian propaganda and its Ukrainian mouthpieces started pushing disinformation messages about Ukraine “preparing provocations to heighten the tension as well as looking for reasons for a possible invasion” and “sabotaging the Minsk deal” with double force and strengthening the campaign on demonizing Ukraine’s Western partners.

The traditional thesis about Ukraine “refusing to support peaceful settlement” of the situation in Donbas were also supplemented with floods of propaganda on Telegram channels, both anonymous and connected to pro-Russian Ukrainian politicians. One of them, Yevheniy Muraiev, the owner of “NASH” TV channel, gained dubious fame as Moscow’s potential candidate for pro-Russian Ukrainian leader, according to the British Foreign Office. However, this is one of the plenty possible scenarios prepared by the Kremlin in order to mislead and intimidate both Ukraine and the West.

However, with its clumsy attempts to shift the responsibility from the aggressor to the defender, Russia is once again demonstrating not only its logics of irrationality but also the decisiveness to have twin advantages of making Western partners abandon Ukraine and also making Ukraine lose faith in strong international support. That is why the systematic sanctional pressure on Russia, the politics of non-compromising with the aggressor, and consolidated support of Ukraine is a key to maintain stability and prevent further escalation.

So far, Ukraine is able to prevent Russia’s large-scale offensive with the help of allies. It should be understood that even if Russia refuses to resume military aggression after assessing the risks to itself, it is not going to abandon the information aspect of the war.

Therefore, the tactics of the Kremlin and its agents may change to the demonization of the West for “militarisation of Ukraine”, although nothing happened and could not have happened, because Russia is peaceful and has done its utmost to maintain peace despite all the “provocations”.

It is necessary to remember that the Kremlin will do everything to get its lost face back and convince everyone of its “innocence”. As a result, the global community is facing two challenges: to prevent even greater bloodshed, without allowing to deceive itself, as if all the assistance to Ukraine was baseless. It is our actions that determine everything.