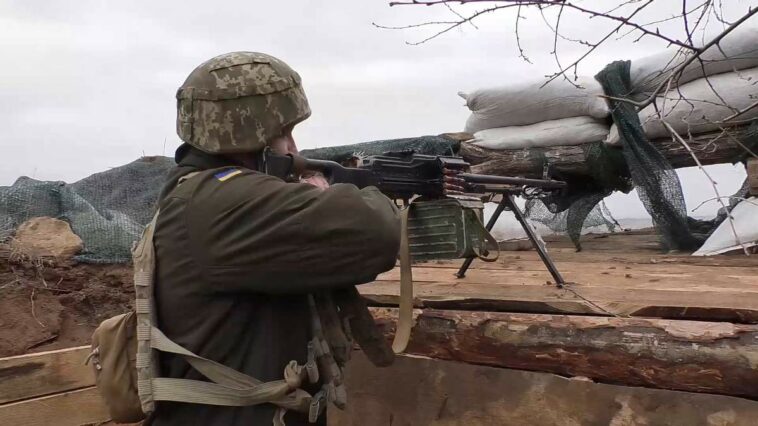 This past week, tensions flared around Ukraine. As the country braced for a possible invasion on February 16, Russia softened rhetoric. President Putin agreed to continue talks and end some of the military drills in meetings with Foreign Minister Lavrov and Defense Minister Shoigu. A day later, the Russian Duma passed an appeal to Putin to recognize the so-called “DNR” and “LNR”. On February 17, the military situation on the ground in Donbas escalated as Russia-led forces shelled the government-held area all along the line of contact. What does that say about the Kremlin’s plans? Here’s a look at how Ukraine and Western allies respond.

Spike in attacks in Donbas. On February 17, Russia-backed militants carried out attacks on two dozen near-front towns in the government-controlled part of Donbas with weapons banned under the Minsk agreements.

Two Ukrainian service members were wounded in action, and two civilians were injured. In Stanytsia Luhanska, shells hit a kindergarten facility while the children were inside. The children were not injured as they were in a different room. Three kindergarten staff suffered concussion.

Later that day, shells hit a school in Vrubivka while 30 students and 14 staff were inside. They had to escape shelling in the basement.

Russia responds to US’s proposals. On the same day, Russia sent a response to U.S. proposals, threatening to use “military-technical measures”.

“We are stating that the American side did not give a constructive response to the basic elements of the draft treaty with the United States prepared by the Russian side on security guarantees,” the document reads.

“In the absence of the readiness of the American side to agree on firm, legally binding guarantees of our security from the United States and its allies, Russia will be forced to respond, including through the implementation of military-technical measures,” the document said.

Russia has demanded written guarantees that NATO would not expand eastward, would block future membership for Ukraine and Georgia, would pull back troops stationed in countries that joined the alliance after 1997, and would return to its pre-1997 borders. The demands were “of utmost importance to Russia,” the response said.

Russian invasion of Ukraine is not planned, the document said.

Prospects of Ukraine joining NATO, Zelenskyi’s comments. For Ukraine, joining the NATO alliance is a guarantee of not losing its independence. There is no other path than NATO for Ukraine, President Zelenskyi told BBC correspondent Sarah Rainsford. Answering her question on whether Ukraine is ready to drop its ambition of joining NATO, he said: “I understand what you want to get, but it’s not the ambitions. We lost 15,000 people since the beginning of this war. It’s not the ambitions, it’s our life.”

Zelenskyi acknowledged that the path toward Ukraine’s membership in NATO and the EU can be long, what’s key down that path is “not to lose the country,” he said.

Russia fuels the crisis around Ukraine’s prospects of joining the alliance to justify its buildup on the border under the pretext that “it allegedly protects its sovereignty,” Zelenskyi was quoted as saying. Those statements are twisted, he added.

“We cannot accept a return to an age of spheres of influence. Where big powers bully, intimidate, or dictate to others,” NATO’s Secretary General Jens Stoltenberg said in a news conference Thursday.

Statements by U.S. Secretary of State, Secretary of Defense. “Russia plans to manufacture a pretext for its attack,” U.S. Secretary of State Anthony Blinken said Thursday at the United Nations Security Council meeting in New York. “This could be a violent event that Russia will blame on Ukraine, or an outrageous accusation that Russia will level against the Ukrainian Government.  We don’t know exactly the form it will take.  It could be a fabricated so-called ‘terrorist’ bombing inside Russia, the invented discovery of a mass grave, a staged drone strike against civilians, or a fake – even a real – attack using chemical weapons.”

Russia may describe this event as ethnic cleansing or a genocide, Blinken said. Russia says it’s drawing down the forces on Ukraine’s border. The U.S., Allies and partners do not see that happening on the ground. “Our information indicates clearly that these forces – including ground troops, aircraft, ships – are preparing to launch an attack against Ukraine in the coming days,” the U.S. Secretary said. Russia has amassed more than 150,000 troops around Ukraine’s border.

“Next, the attack is planned to begin. Russian missiles and bombs will drop across Ukraine.  Communications will be jammed.  Cyberattacks will shut down key Ukrainian institutions. After that, Russian tanks and soldiers will advance on key targets that have already been identified and mapped out in detailed plans. We believe these targets include Ukraine’s capital, Kyiv,” Blinken was quoted as saying.

“We even see them (Russians) stocking up their blood supplies. (…) you don’t do these sort of things for no reason,” U.S. Secretary of Defense Lloyd Austin said at a press availability at the NATO Headquarters in Brussels on Thursday.

Formal start of Ukraine’s new alliance with UK, Poland. Ukraine, the UK, and Poland announced the formal start of a new grouping in Kyiv on Thursday.

“I believe that in the historic perspective, the new axis London-Warsaw-Kyiv will make an important contribution – it will strengthen the area between the Baltic Sea and the Black Sea, and create a new geopolitical reality in this part of Europe,” Ukraine’s Foreign Minister Dmytro Kuleba said in a Facebook post.

“In life, we don’t just deal with problems that we have today. We do not forget about Ukraine’s long-term strategic goals, and continue to pursue the strategy of proactive foreign policy. If we drop our long-term course because of Russia’s threats and allow Russia to make us dependent on its constant demands and threats, we will never win.”

“Only if we take a proactive stance and consider long-term prospects, we’ll be able to overturn the course of this hybrid war. The trilateral alliance is one of those steps.”

“We are pursuing a strategy we have. We are at the center, not on the margins. The crisis will end, and Ukraine will stay – a strong state with strong alliances,” Kuleba said.