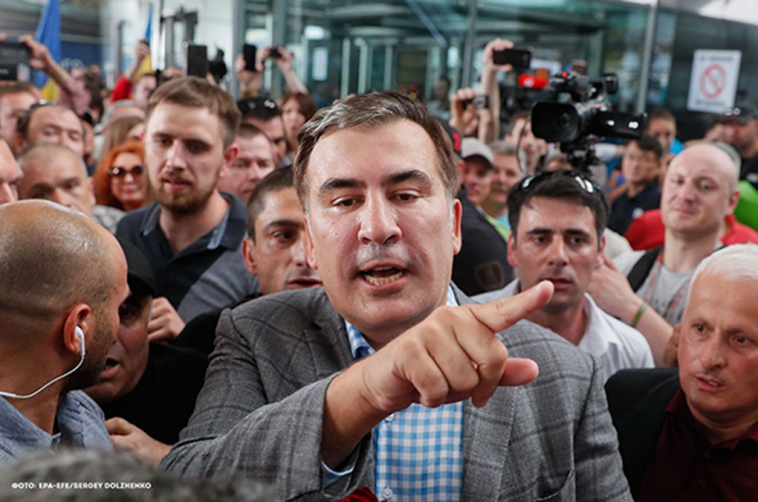 This week, President of Ukraine Volodymyr Zelenskyi offered ex-President of Georgia and former head of Odesa regional administration Mikheil Saakashvili the post of the Vice Prime Minister on reforms. Saakashvili called it a “great honor”. UCMC takes a closer look at what lies beneath Saakashvili’s return to Ukrainian politics and what his chances of entering the cabinet are.

2019: a comeback after deportation. Nearly one year ago, on May 28, 2019, President Zelenskyi ensured restoration of Saakashvili’s Ukrainian citizenship. The Georgian politician was initially issued the Ukrainian passport in May 2015 at the initiative of then President Petro Poroshenko, a university friend of his.

Subsequently, Saakashvili chaired the Odesa regional administration. During his year and a half in office, he had quarreled with nearly everyone in the cabinet. His criticism of Poroshenko resulted in his sacking. Mikheil called his former buddy a “huckster” (baryha).

Confrontation with Poroshenko ended in Saakashvili’s deportation from Ukraine. When Zelenskyi ordered to restore his citizenship, he explained that he just “corrects an illegal decision” and expects no political gains out of it. Saakashvili has been openly supporting Zelenskyi long before.

2019: support to “Servant of the People” at the parliamentary elections. Being back in Ukraine, Saakashvili reassured that he has no political ambitions. At the recent parliamentary elections he called on his supporters to vote for the “Servant of the People” (Sluha Narodu) party, saying that “each per cent matters”. After the party got absolute majority in the Parliament and formed Oleksiy Honcharuk’s government, rumors on Saakashvili becoming part of the team stopped.

The politician’s public appearances. Nevertheless Saakashvili did not disappear. He continued to appear in public as politician – thus, he has been commenting on key developments in Ukraine’s domestic and foreign policy (he comments on Georgia as well). He takes part in TV shows and keeps reminding that he is a reform expert.

A change in politics: experienced staff in demand. The year 2020 commenced with political turbulence in Ukraine, when the young cabinet of Oleksiy Honcharuk was reshuffled, and Denys Shmyhal was voted in as the new Prime Minister.

Political experts mention “chaos” and “shortage of personnel” when describing the circumstances in which the new government was formed. A number of ministries were split to be later reunited, some of the ministers stayed but then left. In the end, the new cabinet that was supposed to focus on economic problems in the first place, was formed with empty seats of the Minister of economy, finance and energy. Several candidates declined the job offers.

Besides, cabinet reshuffle demonstrates that Zelenskyi decided to renounce the “new faces only” approach and started looking for experienced staff, Fesenko proceeds.

Risks of the “conflict-prone individual”. Risks from Saakashvili’s potential appointment are quite high, past precedents show that he can always cause a big conflict. Moreover, it is likely that his future ambitions will go beyond the Vice Prime Minister’s post.

According to Fesenko, not everyone within Zelenskyi’s team approves of Saakashvili’s appointment. Their concern is that the situation with Poroshenko can repeat, and Saakashvili will turn from President’s ally into his ardent critic.

The most obvious potential conflict that he can have is with Interior Minister Arsen Avakov with whom they already had a bad quarrel in public in the past.

One should not expect an immediate war between the two of them, while the conflict has all grounds to break out in future – Avakov will be protecting his influence, while Saakashvili will be also in try to get influence in Shmyhal’s cabinet.

It is unlikely that Prime Minister Shmyhal himself will appreciate the appointment of such a powerful figure as Vice Prime Minister, as it would represent a threat to his own influence.

The voting may take place on April 28-29, for now several rounds of negotiations and meetings proceed. It is also planned that Saakashvili will meet the parliamentary factions.