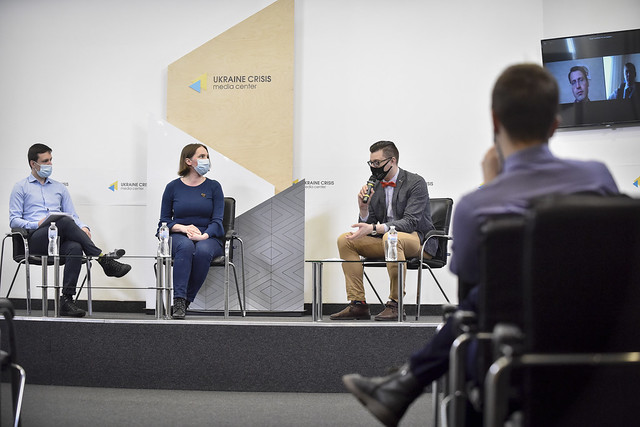 The School for Policy Analysis NaUKMA presented at Ukraine Crisis Media Center the results of a nationwide survey designed to study attitudes to the selected provisions of the draft law “On the government policy in the transition period” that is to define the future of the occupied territories in Donbas and Crimea, and shape the relations with Russia. We take a look at the key findings.

The survey. The survey was commissioned by the School for Policy Analysis NaUKMA within the Think Tank Development Initiative for Ukraine, a project implemented by the International Renaissance Foundation in partnership with the Open Society Initiative for Europe (OSIFE) with the financial support of the Embassy of Sweden to Ukraine. The poll was conducted by the research agency Info Sapiens as part of a nationally representative omnibus survey. The field period for this survey was January 13 to January 31, 2021. The research includes a sample of 2,000 adults. The pollster did not survey Ukrainians in Crimea, interviews in Donetsk and Luhansk regions were conducted in the government-controlled area. The theoretical maximum margin of error for the survey does not exceed 2.2 per cent.

The survey was structured in sections ranging from the draft law “On the government policy in the transition period” (1), to the ceasefire and regaining sovereignty through a military operation (2), and to foreign policy and relations with Russia (3), explained Anton Suslov, analyst at the School for Policy Analysis NaUKMA, presenting the study.

What is known about the bill? The draft law “On the government policy in the transition period” was first released by the Ministry of Reintegration of the Temporarily Occupied Territories on January 11, 2021. It is the first comprehensive, publicly presented bill on the formulation and implementation of the government policy in the context of the armed conflict and the intended de-occupation of Ukraine’s territories that are currently occupied. The bill is at the committee stage, votes have not taken place yet.

Deputy Minister of Reintegration of the Temporarily Occupied Territories of Ukraine Ihor Yaremenko confirmed that intense work to shape the draft law is underway, and civil society representatives are actively engaged.

Key numbers of the survey

Here’s what the survey found.

A narrow majority (52.9 per cent) of Ukrainians say that citizens and representatives of Russia and its military allies should not take seats in the administration, while 11.9 per cent don’t mind.

Grant amnesty, preclude future holding of office. More than four-in-ten (44.4 per cent) of Ukrainians say that the individuals who provided essential services as part of the Russia-installed occupation administrations and did not inflict harm on the life or health of the citizens, should NOT be barred from holding future office. Just 17.9 per cent take the opposite view.

At the same time, 35.9 per cent strongly or somewhat agree that amnesty should be granted for minor offences, 24.1 per cent disagree, and 20.8 per cent did not answer.

Nearly half (49.9 per cent) of Ukrainians say that foreign nationals should not be pardoned, 17.2 per cent disagree.

When to hold elections in the occupied territories. Some 46.6 per cent of Ukrainians say that local government elections in the temporarily occupied areas in Donbas and in Crimea should be held after a minimum of two years after de-occupation. Some 11.6 per cent take the opposite view.

A slim majority (51.2 per cent) of Ukrainians say that after de-occupation, the voting rights of the residents of those territories in national elections should NOT be restricted. Just 13 per cent disagree.

Slightly more than a third (36.4 per cent) say that those granted amnesty should be eligible for running for office in the local self-government, while 21.4 per cent take the opposite view. Some 23.8 per cent did not answer.

How Ukrainians assess the ceasefire. Fewer than half (48.4 per cent) of Ukrainians see the ceasefire introduced in July 2020 as government’s significant achievement, 26.8 per cent disagree.

Deputy Minister of Reintegration of the Temporarily Occupied Territories of Ukraine Ihor Yaremenko said the vast support for the military operation in Donbas (42 per cent) and Crimea (37 per cent) was surprising: “I could never imagine so many people favoring the military operation. It is a signal from the public. Personally I do not support the military operation. I don’t see the military capacity we need to de-occupy our territories. We must be clear that we oppose the Russian Federation that has the world’s second-largest nuclear stockpile and, probably, the largest army in Europe. While I deeply respect our military, I would like to save our people’s lives.”

Support by international partners, views of Russia. Slightly more than a third (37.4 per cent) of Ukrainians say that a military operation is necessary to regain sovereignty over Crimea. Some 27.5 per cent disagree, and about a fifth did not answer.

A large majority (75.5 per cent) of Ukrainians say that cooperation with the Western democracies is beneficial for Ukraine. Just 7.4 per cent take the opposite view.

Overall, 39 per cent support the visa regime with Russia, and an equal number say they do not.

Some 44.9 per cent say that Russia’s interest is to continue waging the war in Donbas, 23.9 per cent take the opposite view. Also, 31.2 per cent did not answer clearly or refused to answer.

A slim majority (58.4 per cent) of Ukrainians say that Russia does not want Ukraine to regain sovereignty over the occupied territories (the so-called “DNR” and “LNR”). Some 9.8 per cent disagree, and 31.9 per cent did not answer clearly or refused to answer.