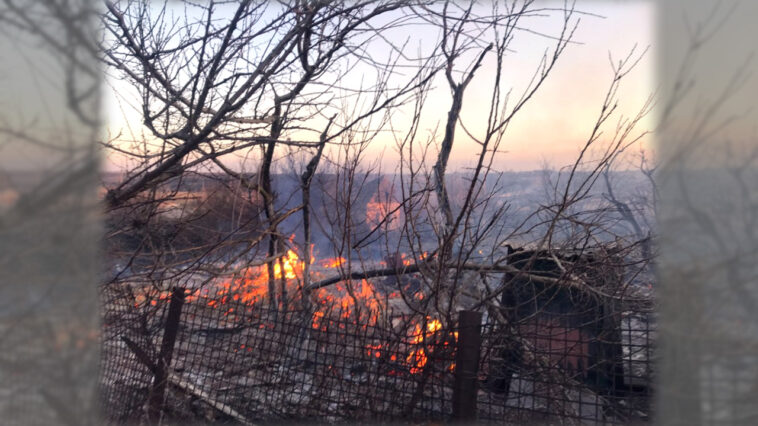 Russian propaganda outlets amplified the reports. Ukraine has nothing to do with the provocations, Ukraine’s military intelligence underscored. “Those fake news and the incidents that allegedly occurred in Transnistria are a provocation by Russia’s security services against Ukraine and Moldova,” the statement reads.

On April 25 and 26, explosions were recorded in the so-called Ministry of State Security in Tiraspol, in a radio facility in the village of Maiac, and in a military unit in Parcani.

On Tuesday, in Maiac, two explosions knocked out of service two antennas that rebroadcast Russian radio, the so-called Ministry of Interior of Transnistria said. No one was hurt.

There was also a “terrorist attack” on a military base in Parcani and a military aerodrome in Tiraspol, unrecognized Transnistria claimed.

The Russian troops in Transnistria were put on full combat alert, the General Staff of the Ukrainian Armed Forces said. All security agencies in the area are on high alert.

On April 26, Moldovan President Maia Sandu said Moldova is aware of an explosion at the Tiraspol airfield, but does not know what caused it. “Forces of the Transnistrian region are behind the attempts to escalate the situation. Those forces are in favor of war, they are interested in destabilizing the situation in the region,” Sandu said. The Moldovan government continues to collect and study data, she added.

Following reports of explosions, lines of cars headed out of unrecognized Transnistria into the government-controlled territory of Moldova. Photos show lines of cars jamming the roads leading outside Transnistria.

That is a provocation by the Russian secret service to escalate panic and fuel anti-Ukrainian sentiment, Ukraine’s military intelligence said.

Russia wants to justify the war in Ukraine, involve “PMR” in the war or use the region as an area from which to launch the attacks.

Forty nations meet at Ramstein Air Base for talks on military support for Ukraine. Meetings to become monthly. On April 26, at the American Ramstein Air Base in Germany, defense officials from more than 40 nations gathered for talks on military support for Ukraine. U.S. Defense Secretary Lloyd Austin hosted the event following a trip to Kyiv where he learned about Ukraine’s defense needs and the situation on the frontline.

“Ukraine clearly believes it can win and so does everyone here,” Austin said in the remarks opening the conference. Ukraine’s allies don’t have any time to waste as the next several weeks will be decisive, Austin said during a news conference. The countries double down on joint efforts to support the Ukrainian Armed Forces, he added.

Together, allied nations have rushed roughly USD five billion worth of military equipment to Ukraine since Russia’s invasion. Austin said allies would meet once a month to monitor the progress and discuss Ukraine’s defense needs.

The conference marks a shift in how the democratic world reacts to Russia’s aggression against Ukraine.

Ukraine in Flames #47. Is the Russian military machine possible without Putin?

Military defeat, demise of Putin’s regime and demilitarization of Russia is a wishful discussion in Ukrainian and international media. The logic behind such thinking is based on international criminal law. Ukraine rightfully expects prosecution of Russian war criminals, reparations from the aggressor and further improvement in security guarantees after the war. Nevertheless, Russian military power is an independent asset that is not fully linked to the fate of its commander-in-chief.

Putin used to rely on the FSB more than the Army whose command still has some autonomy in decision making and will not be shaken by Putin’s fall. Even if the current political and military elite in Russia is wiped out, revanchist sentiments in the Russian society will remain and may result in armed conflicts in 5-10 years. Nuclear weapons will likely stay in Russia under any government. There are no effective international mechanisms to pressure Russia into giving up the nukes and no vision for security guarantees for Russia without them. Russia’s ties with military groups in Belarus, Africa and the Middle East, as well as its capacity for cyber warfare, can survive regardless of economic sanctions.

The future of the Russian military machine depends on multiple factors – not just Putin – and can pose unexpected risks regardless of economic decline. Ukraine in Flames #47 explores several scenarios.