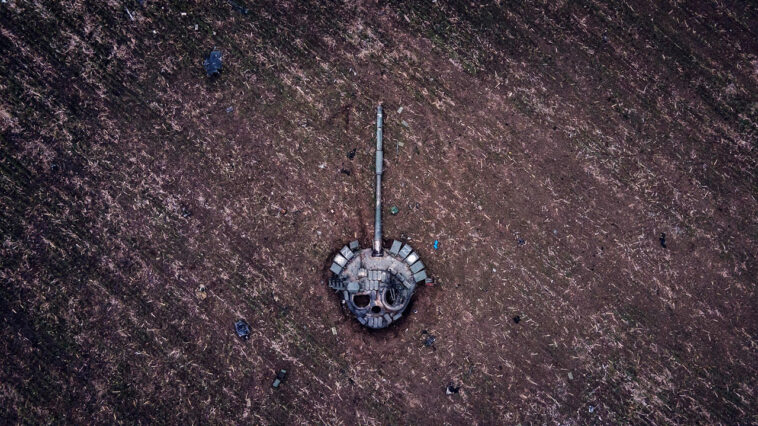 © General Staff of the Armed Forces of Ukraine

On May 18th Finland and Sweden had submitted their official applications to join NATO. Earlier these countries had maintained the course of neutrality but amidst russian militaristic ambitions they decided to change their minds.

This decision has divided the russian propagandists’ schizophrenic reality. Some (foaming at the mouth) threatened these countries with a nuclear attack while others said that this means absolutely nothing to russia. Nevertheless within several months of the “special operation” of russia in Ukraine the land border between russia and NATO had increased by 50 percent (from 1215 to 2600 kilometres).

According to the Russian TV propaganda the “special operation” is going “as planned” so we cannot resist the temptation to look at its successes and its plan in more detail. Especially since one of the initial plans of this operation – non-expansion of NATO has already been “carried out”.

What was russia’s plan in this “operation”?

More than 80 days had passed since the beginning of the war. Kyiv, Chenyhiv, Sumy regions have all been liberated from the occupation of russian forces, russian troops are being pushed back in Kharkiv region and taking the other territories is out of the question.

The advance of Russian army on February 24th (in dress uniform for the victory parade) turned into a long lingering war with more than 28 000 casualties among Russian military and loss of numerous military equipment and transport vehicles (despite russia’s “unbeatable” army). The propaganda rhetoric has also changed from bragging to self-hypnosis that they are fighting the British or even NATO. A few days ago new information emerged about “russia’s unwillingness to capitulate”. This is quite a change from victory parade to capitulation.

All is also going “according to the plan” here especially considering the lend-lease agreement and huge military support of our allies for which we are very grateful! Yes, Ukraine is losing a lot in this war: its best minds, the economy, employment, homes, a chance for millions of its citizens to live normally.

Since the beginning of the invasion even the civilians can tell the difference between the rocket strikes and the work of the air defence systems, know how NLAW and Stinger look like, and take courses in first medical aid. Not to mention tens of thousands of Ukrainians, who became volunteers.

3. Denationalization and de-Ukrainization of Ukraine

Pop musicians and bloggers who used to work with russian audience have switched to speaking Ukrainian language. Teenagers in Tiktok, which before war was Russian rappers’ biggest platform, now post patriotic content covering songs of “Klaush” with videos about our military.

Metro stations and streets in Kyiv which were named after russian writers are being renamed. In many cities the Pushkin monuments were destroyed and Russian-speaking Ukrainians curse the russians when they come out of occupation and bomb shelters.

Such unsuccessful de-Ukrainization is also happening in the West. Ukraine is now on everyone’s lips: across all social media platforms, at all the festivals, competitions and sport events. A few days ago at the opening of Cannes festival president Zelensky had addressed the audience and Ukrainian films premiers raise unprecedented interest.

Meanwhile Russian tourists on social media give advice on how to pretend being Ukrainian when abroad so that they are treated better (spoiler: they won’t succeed because Russian ways are well remembered in Turkish hotels).

In all honesty this is the most hilarious point of the russian plan. And it is hilarious not because Zelensky was well loved before ethe war but because for Ukrainians defending their land was never correlated with the person in presidency. We are free people, we got rid of Yanukovich during Maidan revolution in minus 30 weather, under gas cannons and fire.

How could the Russian strategist think that they can bring Yanukovich back after all this resistance? Such lack of knowledge of your enemy is quite touching. President Zelensky’s rating sky rocketed even among those who never sympathized with him. He became one of the most famous and respected leaders of the world.

5. Fight against Nazism in Ukraine

First “results” of this objective started appearing when Russians had put swastikas all over themselves and made their children form Z letters in social media videos. Russina soldiers committed unimaginable atrocities on occupied territories, kidnaped children and created filtration camps.

Russians came up with the presence of “nazis” at Azovsteel and held thousands of civilians (both adults and children) hostage until the whole world saw that the warriors of “Azov” are heroes and that the nazis are in fact russians and their soldiers.

International investigators are gathering evidence of Russian war crimes in Ukraine. USA had allocated six million dollars for the “Conflict Observatory” program which will investigate and document the evidence on the atrocities of the occupants. Britain’s minister of foreign affairs Liz Truss stated that Britain will support the idea of tribunal against putin and other russian leaders connected to the crimes in Ukraine.

Wikipedia now has a page about “russism” and the free world talks about recognizing russia as a terrorist state.

War in Ukraine is an ugly war! More than 80 days of this war had destroyed many lives and caused physical and psychological traumas. These 80 days became the days of loss and misery for millions of Ukrainians.

We acknowledge that russians have enormous losses in this war and all the objectives they set in this war are so far failing miserably. Because unlike Totalitarianism, the free world is driven by the free people fighting for their ideals, without falsely idolizing their leaders, their fake history and ideology of death and violence.