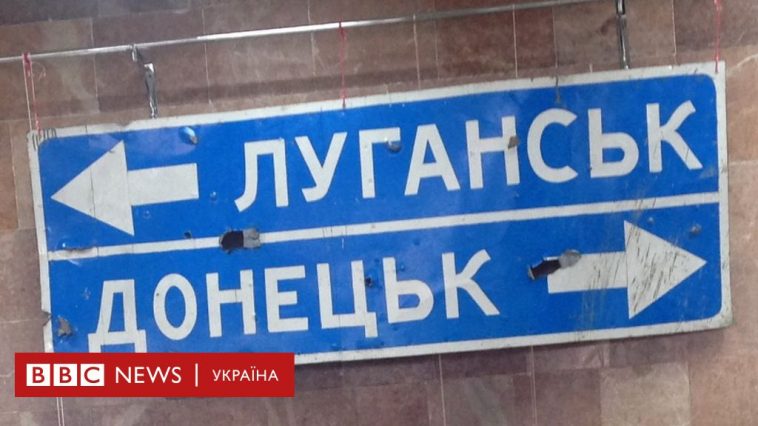 They fired upon the Ukrainian troops’ positions from Minsk-proscribed 82-mm and 120-mm mortars as well as from grenade launchers, heavy machine guns and small arms. Russia’s proxies fired from antitank grenade launchers upon Ukraine’s Joint Forces positions near Maryinka, Bohdanivka and Krasnohorivka.

Coronavirus in the army. As of April 27, 7am, 44 cases of COVID-19 were recorded in the Armed Forces of Ukraine. Since the beginning of the outbreak 18 persons have recovered, and two deaths were recorded. Three hundred sixty-one persons were isolated (self-isolation included), 117 of them are to discontinue isolation in the next three days.

Occupied Donetsk and Luhansk to be called “Stalino” and “Voroshilovgrad”

On April 24 the leader of the so-called “DPR” Denis Pushylin signed an “order” that allows to call occupied Donetsk by its old-time name “Stalino” three times a year.

The name is to be used on the “Victory Day” in World War II on May 9, on June 22 when Germany invaded the Soviet Union, and on September 8 when the city was liberated from Nazi occupation. Donetsk was called Stalino between 1924 and 1941, and between 1943 and 1961.

On April 17 the so-called “LPR” controlled by Russia said they will also call occupied Luhansk “Voroshilovgrad” three times a year.

Foreign policy: when will the next Normandy format meeting take place?

At the Normandy Four meeting in Paris in December 2019, the parties agreed to hold their next meeting in April. Their intention was amended by the coronavirus pandemic and Russia’s slow implementation of its commitments. The parties have now agreed to hold consultations.

On April 30 foreign policy chiefs of the Normandy Four member states are to discuss the Minsk agreements on peace settlement in Donbas. There are no updates on the upcoming summit, said Ulrike Demmer, a spokesperson of the German Federal Government.

Russia sees no chance of holding a new “Normandy Four” summit until agreements made during the December meeting of heads of the states in Paris are implemented, said Russian Foreign Affairs Minister Sergey Lavrov. “We will never be negotiating a new summit, until all the agreements made in Paris are implemented in an honest, full and responsible manner,” Lavrov said on air of the TV show “Bolshaya Igra” (Big Game) on Russia’s Channel One.

With COVID-19, the world is battling two pandemics at the same time — disease and panic. Fear, understandable in the times of crisis, risks turning into crippling chaos that undermines trust towards local governments and democratic institutions — especially when it is carefully incited by third actors. As evidenced by the EU’s diplomatic service, the Kremlin has been actively involved in spreading coronavirus-related disinformation with a goal to “to aggravate the public health crisis in western countries, specifically by undermining public trust in national healthcare systems”. While we at Ukraine Crisis Media Center have previously explored how Russian government exploits the coronavirus pandemic to reach its strategic goals at home and abroad, a particular aspect of the Kremlin’s activities demands particular attention — its reliance on the local proxies. UCMC’s Hybrid Warfare Analytical Group takes a deep dive into the subject, read on.

As of April 27 there are 9.009 confirmed cases of COVID-19 in Ukraine, 220 deaths are recorded, 864 patients recovered. Over the last day Ukraine reported 392 new cases of the novel coronavirus, 11 persons died and 24 recovered.

Lockdown exit plan: what the government suggests. In Ukraine the quarantine measures were extended until May 11. At the same time the government suggests a five-stage exit plan from the quarantine measures. The first stage foresees control over the spread of COVID-19. If for ten days in a row the share of new cases per all tests stays unchanged, or the growth rate in total cases remains at five per cent, the government will order to reopen parks and recreation areas, some of the beauty salons, and to restart group sports training. Wholesale and retail suppliers of non-food products will restart operation, coffee shops will reopen for takeaways, car washes, bike shops and rentals will reopen, services of notaries, lawyers and auditors will become available.

The second stage of the lockdown exit plan will start when the share of new cases declines and the burden on the healthcare system lowers, said Prime Minister Denys Shmyhal. If for ten days in a row the share of new cases per all tests declines daily, the government will allow to reopen non-essential retail service providers, restart graduating classes in high school and preparations to the independent external evaluation. Restaurants will reopen for takeaways; open-air cinemas, gyms, fitness centers and hotels will reopen; sports tournaments with a maximum of 50 spectators will be allowed.

The third stage of the exit plan foresees lifting the burden on the healthcare system created by coronavirus patients. If for ten days in a row the number of COVID-19 recoveries is twice the number of new cases and the hospitals’ capacities focused on treatment of coronavirus patients are under 10 per cent, the government will order to reopen outdoor sports facilities, children’s playgrounds as well as some schools and kindergartens.

Mass testing. Chief sanitary doctor Viktor Lyashko said that Ukraine plans to introduce mass testing for COVID-19. He said ELISA tests will be detecting antibodies. Lyashko added that Ukraine will become the “fifth country in the world” to apply the method. These testing systems are being researched now. Deputy Head of the Office of the President Kyrylo Tymoshenko said that Ukraine had started mass production of PCR tests, the first batch of 200 thousand items will be sent to the regions. Tymoshenko said that about 400 thousand Ukraine-produced tests are expected next week. They will help meet the current demand for tests across Ukraine.