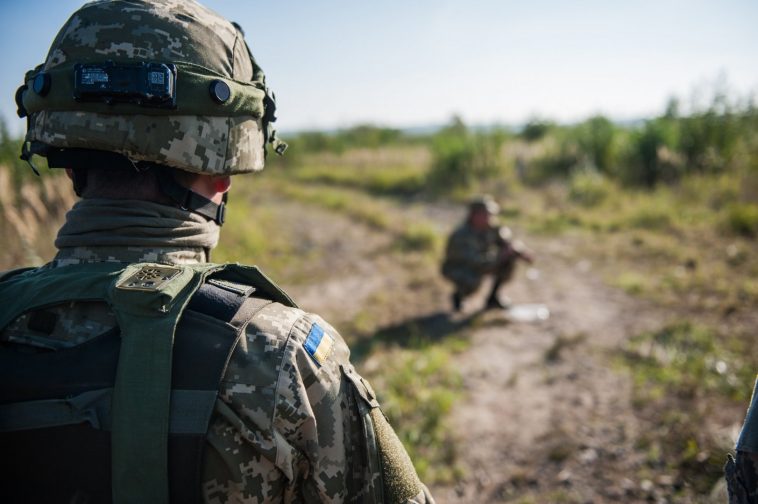 A permanent and comprehensive ceasefire is taking effect on July 27. On July 25, units of the State Emergency Service that are part of the Joint Forces, detected and neutralized seventy explosive devices and remnants on about seven hectares of land. They also helped the locals repair 10 houses in near-front areas that were damaged during attacks. Repair works are underway in twenty more sites.

On the eve of the permanent and comprehensive ceasefire coming into effect, Russia-backed militants staged another provocation near Novomykhailivka and fired grenade launchers to plant anti-personnel POM-2 mines at Ukrainian positions. The mines, exclusively produced by the Russian Federation, are prohibited under the Ottawa Convention. POM-2 is a remotely delivered mine that self-destructs after four to 100 hours. The insidious effect of the provocation is that the land mine can explode during the truce time, so that the explosion passes for an attack by Ukrainian troops, it can also explode injuring military personnel.

Will the permanent ceasefire in Donbas last?

At the July 22 meeting of the Trilateral Contact Group on conflict settlement in eastern Ukraine, members agreed to a reinforced ceasefire at the contact line effective July 27.

Office of the President of Ukraine reminded that it comes as a basic pre-condition for implementation of the Minsk agreements and paves the way for further progress. Is a lasting ceasefire to be expected?

Readying the Ukrainian Armed Forces. Ukraine’s Joint Forces started preparing for a permanent and comprehensive ceasefire at the contact line in Donbas taking effect on July 27. The Joint Forces Commander Serhiy Nayev signed off a respective order on July 26, complying with the decision of the Minsk-based Trilateral Contact Group.

Zelenskyi’s telephone call with Putin. President Volodymyr Zelenskyi of Ukraine and President Putin of the Russian Federation had a telephone call on July 26. Press services of both heads of the state issued a respective news piece. As per Volodymyr Zelenskyi’s press service, the sides acknowledged the urge to implement additional steps to support the ceasefire in Donbas. The Kremlin noted that the phone call was Ukraine’s initiative.

What does Putin want? In the telephone conversation, Putin said that the Ukrainian parliamentary decree on local elections contradicts the Minsk agreements and puts at risk the prospects of conflict settlement in Donbas. To remind, the Verkhovna Rada of Ukraine passed the decree setting the date for the next round of local elections on October 25, 2020.

According to the decree, local elections will be held all across Ukraine but in the Russia-occupied Crimea and part of Donetsk and Luhansk regions. Elections in those territories are to be set by a special law, they will be held after Russia stops its intervention and withdraws its troops.

Position of the Commander-in-Chief. Still, according to the statement made by the Commander-in-Chief Ruslan Khomchak, the Ukrainian Armed Forces are ready to fight back in case the adversary violates the ceasefire agreements. Additional reserves were established for that purpose, the Commander-in-Chief said. “Measures for the permanent and comprehensive ceasefire do not deprive the troops, in case the adversary violates the agreements, of their right to act in accordance with international and Ukrainian law, not just in the event of an offensive, but also harassing attacks, subversive operations, episodes that threaten lives of the troops and civilians as well as infrastructure damage or destruction,” Khomchak added.

Six years after the liberation of Sloviansk from Russian occupation, Radio Liberty journalists identified some members of the “death squad” responsible for extrajudicial executions of Ukrainians in early stages of the war in 2014.

Identification of seven of the nine members of “military field tribunals” that the retired FSB (Russia’s Federal Security Service) officer Igor Girkin (Strelkov) established, was possible due to the documents he left in the premises of the Security Service of Ukraine in Sloviansk when retreating, as well as based on the interviews with dozens of victims of torture, their family members and witnesses.

According to the investigation, besides Girkin, the death squad included:

In addition to their role in occupation of Donbas, some of the torturers were previously members of the so-called “Crimean self-defense forces” that helped Russia seize the peninsula.

To remind, occupation of Sloviansk started on April 12, 2014, when groups from Russia seized the local police station and city hall.

“Black boxes from PS752 were read out and deciphered successfully. The transcript confirmed the fact of illegal interference with the plane. We are waiting for the Iranian side for the first round of talks next week,” Ukraine’s Deputy Minister of Foreign Affairs Yevhen Yenin twitted Friday.

To remind, two black boxes from Flight PS752 were successfully deciphered in France.

The Ukraine International Airlines flight from Tehran to Kyiv was downed on the morning of January 8, 2020, shortly after takeoff from Tehran’s airport. All 176 persons on board were killed, 11 of them were Ukraine citizens. Majority of the victims were citizens of Iran and Canada.

Four days after the crash, Iran officially recognized that the plane was downed by its military, who mistakenly took it for a hostile target. Iran’s present position is that the incident resulted from a “human error” of the air defense operator, and was not ordered by Iran’s chief military command.

In recent days, there have been noticeable increases in confirmed cases of COVID-19 in Ukraine that reached 1,000 per day.