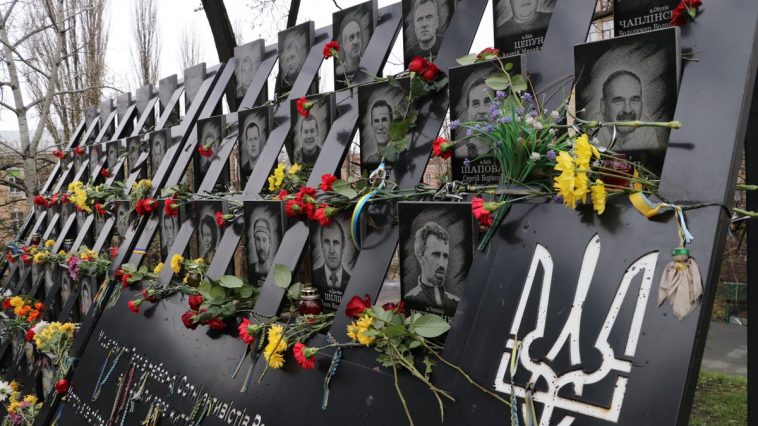 Over the last day in Donbas, Russia-backed militants made six attacks in violation of the ceasefire agreed in summer, the Joint Forces command reported in the morning statement.

Russia blocks passage at the contact line. On November 19, the humanitarian task force within the Trilateral Contact Group on the settlement in Donbas agreed new technical details for Russia to unblock the operation of the crossing points at the contact line Zolote and Shchastia.

On November 10, Ukraine restarted entry and exit of persons and vehicles at the contact line.

In Donetsk region, the operated crossing points on the contact line are Hnutove, Novotroyitske, Maryinka, and Mayorske. In Luhansk region travelers cross at Stanytsia Luhanska, and at the newly established crossing points Shchastia and Zolote. Despite the agreement to unblock them, the Russian side kept denying entry to the uncontrolled territory, so people were being returned to the government-controlled territory.

Settlement by diplomatic means: prisoner swap and Normandy meeting. Ukraine and Russia can exchange prisoners before the end of the year, said spokesperson for the Ukrainian delegation to the Trilateral Contact Group Oleksiy Arestovych during his recent appearance on TV. He added that the Ukrainian side suggested to hold the prisoner swap not later than December 24.

“We suggest holding the prisoner swap before December 24, before Christmas, as a gesture cementing implementation of the agreements we made,” Arestovych elaborated. He said the political advisors started preparations of the Normandy Four meeting scheduled for 2020.

Revolution of Dignity: seven years on

On November 21, Ukraine was remembering the events of winter 2013-2014. Seven years ago, on November 21, 2013, the government decided to halt preparations for signing of the EU-Ukraine Association Agreement. On the evening of that day, activists gathered on the Maidan square to protest. The protests shortly grew into an event that made history as the Revolution of Dignity. In the three months of Euromaidan, riot police made numerous attempts to disperse the protest, the activists were arrested, abducted, tortured, and killed.

All the crimes committed against the protesters during the Revolution of Dignity were collected in the “Maidan case”. The investigation was started by police, later, with the civil society pressuring, a separate unit was established at the Office of the Prosecutor General – the department for special investigations. Last year, the investigation into the case was passed to the State Bureau of Investigation.

We look at the new developments in the Maidan case over the past year, highlighting where the investigation stands and what the actual sentences are.

How many are the proceedings? What has changed over the year?

Throughout 2020, 37 persons were charged in the Maidan case, 19 indictments were presented to the court for trial, 25 persons including six judges, 13 policemen, and six civilians were indicted.

Generally, courts are hearing 86 cases that have 176 persons involved. A total of 343 persons have been held liable, including 34 high-ranking officials, 185 law enforcement staff, 16 prosecutors, 14 judges, and 70 civilians.

The State Bureau of Investigation is currently investigating into 80 criminal proceedings in the pre-trial stage.

Killings on Instytutska street on February 20. On February 20, police used firearms on protesters killing 49 and injuring 233.

Five former Berkut policemen were charged with the killings – Oleh Yanishevskyi, Pavlo Abroskin, Serhiy Zinchenko, Oleksandr Marynchenko, and Serhiy Tamtura. They were all traded to Russia during the winter prisoner swap. Yanishevskyi, Zinchenko, and Abroskin were put on the wanted list.

Charges were brought against 26 Berkut officers, members of the so-called black company headed by Dmytro Sadovnik. The latter fled to Russia in autumn 2014, followed by 20 more Berkut riot policemen in late February.

In autumn 2018, former internal troops sniper Dmytro Khmil was arrested. During Euromaidan, he served with the “Omega” unit. He was charged with the murder of activist Oleksandr Khrapachenko. As the pre-trial investigation is underway, Khmil was put under house arrest.

On February 18, investigators of the State Bureau of Investigation detained and charged another serviceman of the “Omega” unit, Volodymyr Kosenko. He is suspected of being involved in the killings of the protesters on Instytutska street alongside Berkut policemen. Kosenko is now under house arrest.

The case of Yanukovych. In January 2019, former president of Ukraine Viktor Yanukovych was sentenced in absentia to 13 years in prison on the charges of treason and complicity in waging the war against Ukraine. The sentence is being appealed by his lawyers.

Also, on May 12, 2020, the Pechersk district court of Kyiv issued an arrest warrant for Yanukovych in the case of Euromaidan dispersal on February 18-20, 2014. But on November 1, 2020, the Court of Appeal cancelled the ruling, saying that the suspect in not on the Interpol wanted list, and the investigators did not motivate well the risks.

At the same time, ahead of the anniversary of the Revolution of Dignity, the State Bureau of Investigation summoned for questioning several Ukrainian politicians, including former Euromaidan leaders.

The 2020 UN resolution on Crimea: highlights

On November 18, the UN General Assembly’s Third Committee (also known as the Social, Humanitarian and Cultural Committee), approved the draft resolution on the “Situation of human rights in the Autonomous Republic of Crimea and the city of Sevastopol, Ukraine”. The draft was approved by a recorded vote of 63 in favor to 22 against, with 85 abstentions. Sixty-three countries voted in favor of the resolution, 22 were against, and 85 abstained. As the recorded vote shows, this year, the support to the resolution hit a record low, at the same time, the number of the members that voted against was the smallest in all years as well. Russia and its allies including Venezuela, Syria, Cuba, Belarus, and Armenia kept voting against. Russia’s ad-hoc supporters include the states where human rights abuses are peaking, like China or North Korea, as they generally vote against the resolutions focusing on particular territories or states.

Terminology: Russia as the occupying power. While in previous UN resolutions, Crimea was already referred to as occupied territory, the present draft uses stronger terminology.

COVID-19 and human rights in Crimea. As the COVID-19 pandemic shook the world this year, the new draft resolution on Crimea reflects this aspect as well.

The draft resolution notes that the UN is concerned with additional difficulties that Crimeans incur when exercising their fundamental rights and liberties due to useless and inadequate restrictive measures imposed by the occupying state under the pretext of the COVID-19 pandemic fight.

The Crimean Human Rights Group has been monitoring the response to the coronavirus pandemic by the occupation authorities in Crimea since March 2020. It has been collecting evidence that Russia applied no adequate measures to slow the coronavirus spread in the peninsula. Official numbers of total cases and deaths are understated, the human rights organization claims.

Daily flights from Moscow – Russia’s region recording the highest case numbers, were never halted and thus contributed to the further spread of the infection in Crimea. Also, despite the pandemic, the occupation authorities held military parades in Crimea that caused spikes in COVID-19 cases. The draft resolution also puts a spotlight on the coronavirus spread in jails.

While previous resolutions already mentioned Emir-Usein Kuku, the name of Server Mustafayev, coordinator of the “Crimean Solidarity” arrested in 2018, appears for the first time. It comes as a high-level recognition of his efforts to protect political prisoners when chairing the “Crimean Solidarity” initiative. Earlier, Amnesty International declared Server Mustafayev a prisoner of conscience facing persecution due to his human rights activities.

Since then, no Crimean political prisoners have been liberated. On the contrary, Russian occupation authorities have jailed at least 28 Ukrainians in Crimea on politically motivated charges.