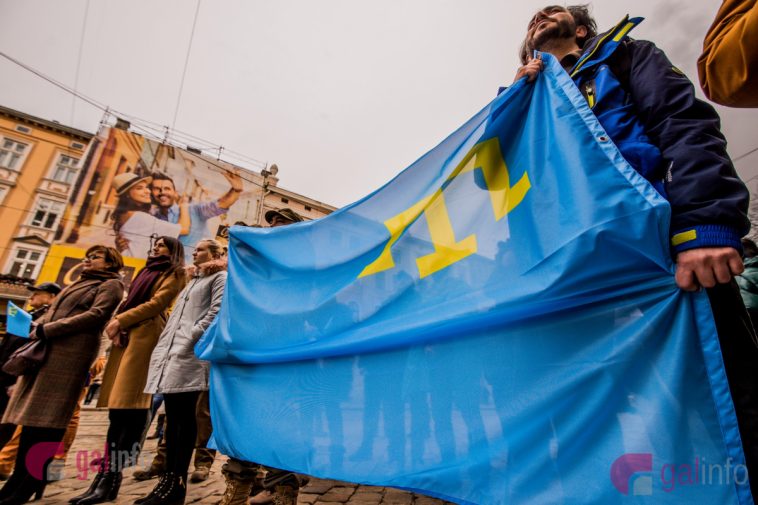 In the past week, Russia-backed militants stepped up the attacks on the positions of the Ukrainian Armed Forces, targeted civilian areas on the contact line, and blocked humanitarian supplies.

On February 28, Russia’s proxies in Donbas made seven attacks. A Ukrainian serviceman was killed in action near Pyshchevyk as the Ukrainian troops’ positions came under fire, the morning report of the Joint Forces Operation command reads.

Political pressure in response to the sanctions against Medvedchuk. According to the Ukrainian delegation to the Trilateral Contact Group on the peace settlement in Donbas, Russia escalates the situation in the frontline for political bargains.

Russia-backed militants intensified attacks in Donbas after Putin’s crony Viktor Medvedchuk and the TV channels he owns were sanctioned, head of the Ukrainian delegation to the Trilateral Contact Group Leonid Kravchuk told DW in an interview.

Kravchuk admitted the escalation in Donbas, while refusing to actually call it “escalation”. “Ukraine took a pro-active stance – Zelenskyi imposed sanctions on the pro-Russian channels because of the propaganda, and enacted the sanctions against Medvedchuk. That’s the result of it. They realized that Ukraine had moved from words to actions. Also, the EU position on Russia, the situation with the Nord Stream 2, and statements by President Biden and his team (made them) realize that they are in a losing situation, so they started demonstrating that they have got power too and can use it,” Kravchuk said.

Russian snipers in Donbas. Fifty snipers of the Russian Federation are permanently deployed in Donbas, Ukraine’s intelligence states. Russia uses Ukraine as a training ground for its new sniper weapons. Starting in 2016, snipers are part of the 1st and 2nd army corps of the so-called “DPR” and “LPR”, the Main Directorate of Intelligence at the Defense Ministry of Ukraine reported. Those sniper units are trained by the Russian instructors.

According to Ukraine’s intelligence, those units number about 450 snipers.

“Besides, sniper groups of the Russian Federation Armed Forces, Federal Security Service (FSB), and other law enforcement agencies are actively coming to Ukraine. About 50 persons are permanently deployed to the Ukrainian territory to train and improve the combat skills with sniper weapons,” said Vadym Skibitskyi, representative of the Main Directorate of Intelligence at the Ministry of Defense of Ukraine.

February 26 marks the National Day of Resistance against Russia’s occupation of Crimea.

On this day, in 2014, in front of the Verkhovna Rada (Parliament) of Crimea, activists rallied in support of the territorial integrity of Ukraine. Pro-Russian forces, including the “Russkoe Edinstvo” (Russian Unity) party members clashed with the protesters.

On February 26, 2021, President Zelenskyi issued a decree laying the foundation for the Crimean Platform. The decree orders to establish the organizing committee that will organize and hold the founding summit of the Crimean Platform. Foreign Affairs Minister of Ukraine Dmytro Kuleba was designated the head of the committee, while deputy head of the Office of the President Ihor Zhovkva will serve as the committee’s deputy head.

The President tasked the Foreign Affairs Ministry to coordinate the Ukrainian input in the Crimean Platform. The Security and Defense Council of Ukraine chief Oleksiy Danilov is to ensure that the Council drafts the Strategy for de-occupation and reintegration of the temporarily occupied territory of Crimea and the city of Sevastopol.

The first summit of the Crimean Platform is scheduled for August 23, 2021. Mustafa Dzhemilev, Crimean Tatar leader, MP, said there are substantial grounds to believe that the U.S. President Joe Biden can be present at the summit.

On February 23, a court sentenced an activist and blogger from Odesa Serhiy Sternenko to seven years in prison. The decision was met with a strong public reaction. A series of protests swept across Ukraine, in Kyiv, a rally was held by the Office of the President.

Who is Sternenko? Serhiy Sternenko is 25 years old, he holds a degree in law. In 2014, when he was 18, he became one of the Euromaidan leaders in Odesa, and chaired the local unit of “Pravyi Sector” (Right Sector). Several more cases have been started against Serhiy Sternenko, in addition to the “abduction of Shcherbych”, he was also charged with exceeding the bounds of self-defense that ended with the death of an attacker. In May 2018, Sternenko was attacked near his house in Odesa (for the third time). He was able to fight back with a knife, injuring one of the attackers, Ivan Kuznetsov who subsequently died.

Serhiy Sternenko insists that he was defending himself, his intention was to detain the attacker, not kill him. The investigation into those attacks on him does not progress, the activist added.

“Venediktova (the Prosecutor General of Ukraine) passed for investigation the cases with evidence of the police complicity in the attempts on my life to the National Police, to those complicit in the crimes,” Serhiy Sternenko recently wrote.

As the proceeding advanced, in summer 2020, Sternenko was put under house arrest. In early 2021, the pre-trial measure was replaced, he was released on bail, MP Roman Lozynskyi (“Golos”, Voice faction) became the guarantor.

What is he accused of? The sentence imposed on Sternenko, is in the case on the abduction and torture of the head of the Odesa office of the pro-Russian party “Rodina” (Fatherland) Serhiy Shcherbych in April 2015. The prosecution insists that a few days before Shcherbych was to be sworn in as a member of a district council in Odesa region, he was invited to come to a meeting, and subsequently abducted. He was taken to an unknown place with a bag over his head, the abductors beat him and demanded that he resign the seat in the council.

What does Sternenko’s defense say? At the press briefing at Ukraine Crisis Media Center looking into the detail of Serhiy Sternenko’s case, the defense team spoke of the investigation’s blind spots, and lack of grounds behind the sentence. “(The investigation) identified neither the cars, nor the place where they headed to. No traces of crime were found at the crime scene,” said Sternenko’s defense lawyer Masi Nayyem. “The court sentenced two persons without specifying their roles. No explanation was provided why the court found them guilty. (…) The crime scene reconstruction was made the next day after those events, while Sternenko was charged five months after theincident,” Nayyem proceeds. Andriy Pysarenko, a defense lawyer added that there is no video footage from the crime scene, a gas station.

“That’s retaliation against a Ukrainian patriot, who was courageous enough to stand against the collaborationists in Odesa. Thanks to the people like Serhiy, Odesa flies the Ukrainian flag today. Serhiy opposed corruption and unlawfulness of the government. The case demonstrates, how Ukrainian courts will act against those who are brave and courageous. (…) The right to freedom of expression of the collaborationists ends where the right of Ukrainians to live in their land the way they want to begins,” defense lawyer Mykola Orekhovskyi said.

Voice of the street. On February 27, protesters rallied in support of Serhiy Sternenko in downtown Kyiv, making it the second rally in one week. The demonstrators gathered outside the Office of the President, proceeding to the Office of the Prosecutor General where they lit flares. The protesters were carrying national flags and placards saying “Venediktova (the Prosecutor General), it’s high time to resign!”, “Free Sternenko”, “You will not scare us”, “The spring is here – wrong people are jailed” (allusion to Zelenskyi’s election slogan).

The demonstrators demanded to restore justice by revising Sternenko’s case. They also called to free the suspect in Pavlo Sheremet’s murder Andriy Antonenko, and stop political persecution of Ukrainian activists and volunteers. Other demands included the push for renewing judiciary by “restarting the High Council of Justice.”

In December 2019, Ukraine enacted landmark anti-corruption legislation including whistleblower protections unsurpassed for compliance with international best practices principles. Now Parliament has enacted amendments to Draft Law #3450 which, if signed into law, will cause Ukraine to plummet from a global role model for whistleblower protection legislation to a global embarrassment.

Anna Myers, Executive Director of the Whistleblowing International Network (WIN) and Tom Devine, Legal Director of the Government Accountability Project in Washington DC, and a Trustee of WIN warn against the enactment of the bill into law. They call on President Zelenskyi to veto the bill and send it back for the Parliament to fix. Read the full text of the analysis here.

Vaccinations. Ukraine started the COVID-19 vaccine rollout on February 24. Yevhen Horenko, a critical care physician in Cherkasy, became the first Ukrainian to receive an injection of a COVID-19 vaccine. Over 3,000 shots were administered on February 24-28. The Health Ministry expects to speed up the vaccine rollout. In the current phase of vaccine distribution, healthcare workers working directly with COVID positive patients are immunized.