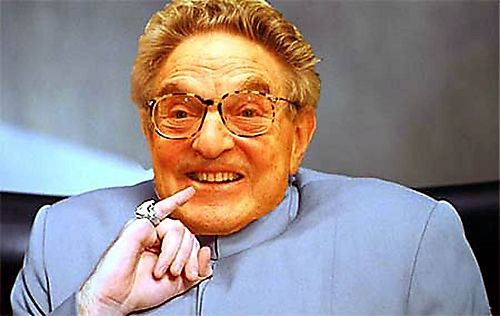 The unprecedented campaign against investor and philanthropist George Soros, which keeps unfolding in certain Ukrainian media, including national TV channels 112, NEWSONE and, in particular, ZIK, since the end of February triggers a number of questions. Who exactly is beyond the attempts to portray the open society supporter as a hand of Washington, carefully pulling the strings behind Ukrainian activism all the way up to Revolution of Dignity? Is George Soros the only, or rather the real, focus of this campaign — or maybe this media attack is akin to shrapnel that strikes several targets at once? And, perhaps most importantly, where have we seen this before?

The messages conveyed in news, political programming and even the whole “marathon” on ZIK channel with an expressive title “Stinks of Soros”, were the following:

Personalities of those promoting such messaging are of particular interest. They include but are not limited to:

Therefore, what initially appears as a well-rounded pool of experts with different backgrounds is actually a homogenous environment with no alternative political positions — and with distinct links to the former pro-Russian government.

Who Is Pulling the Strings?

ZIK channel, as well as NEWSONE and 112, are linked to a pro-Russian oligarch V.Medvedchuk. They are repeatedly promoting main Kremlin-tailored narratives on Ukraine, European states and the USA, and their role as a source of disinformation has grown dramatically after Ukrainian government has made a decision to ban a number of Russian channels. Medvedchuk himself, a leader of the “Opposition Platform — For Life” (OPFL) party, the only Ukrainian political force in the Kremlin’s good graces, is using the media to build up support for the agenda he pursues.

With OPFL scoring some 13% in multi-mandate constituencies during the last parliamentary elections, the party is getting ready for the next battle for votes, — which makes all the more sense given the talk about the possibility of snap elections, which are a rather regular turn of events in Ukraine. Laying ground for electoral competition requires preparation, and in case of OPFL it includes combating Ukrainian civil society. It keeps fulfilling its role as a watch-dog for possible concessions to Russia: if the current President has occasionally become a target of its criticism, then Medvedchuk is its sworn enemy. There was no need to invent a tactic for battling Ukrainian third sector — it has been long in play in Russia and ready to be imported.

As a civic activism supporter who poured substantial amount of resources to promote local initiatives for reforms and democratization, George Soros has naturally come under fire from those who desire to undermine these very initiatives. In 2015, “Open Society Institute” was recognized as an “undesirable organization” in Russia with a claim by a Prosecutor General that its activities “constitute a threat to the basics of constitutional order in Russian Federation”. The local NGOs it supported, including “Memorial”, “Committee against torture” and many others were subsequently labeled as “foreign agents”, making their work virtually impossible.

The decision killed two birds with one stone. First, it cut aid to the few independent civic organizations that threatened to wield any influence on public agenda and have no hope for support from the local actors too afraid to cross the Kremlin’s hardline policy. Second, it broadened the previously laid out canvas for stigmatization of civic activism itself. In Putin’s Russia, the government watches local initiatives as a hawk, and once they grow above the grassroots level, where they constitute no possible threat whatsoever, the Kremlin takes one of two roads. Activism is either shut down, as is the case with Soros-supported NGOs, or carefully expropriated and politicized. The most vivid example of the latter is, perhaps, “The Immortal Regiment”, which started as a movement to commemorate those fallen in WWII and was seized by the governmental officials, pumped with the revanchist and militarist ideas and exported to many countries to expand the Russian influence[4].

The ultimate target of the campaign in Medvedchuk-linked media is, therefore, not George Soros himself but the civil society, which pro-Russian forces need to stigmatize and take out of the equation, employing the tactics imported from the north. In this regard, the relevant “marathon” on ZIK-channel and preceding negative messaging should be considered not a separate case but a broader campaign.

It is safe to assume that it is yet to fully unfold — in fact, what began at the television has started to spread in the media space throughout “junk” web-sites, often promoting Russian disinformation, and social networks. In particular, certain channels on Telegram, which becomes an increasingly popular platform to plant, spread and legitimize political “insights” that often are a step in information operations later picked up by politicians and mainstream media, already are in the game. Some of those, which pose as Ukrainian sources but were discovered to have links with the openly Kremlin ones, have started spinning the message that retaliation to the media attack is an attempt to protect the “assets of Soros”.

Altogether, it highlights how adaptable is Russian disinformation and how it finds new ways to penetrate the target media space through the local proxies. Legally Ukrainian entities, Medvedchuk-linked channels are promoting the same narratives as the Kremlin, serving OPFL’s domestic agenda and expanding Moscow’s influence at the same time. Moreover, the network spreading disinformation goes far beyond the blue screens of television, and it will be seen in action — by far not limited by this case.