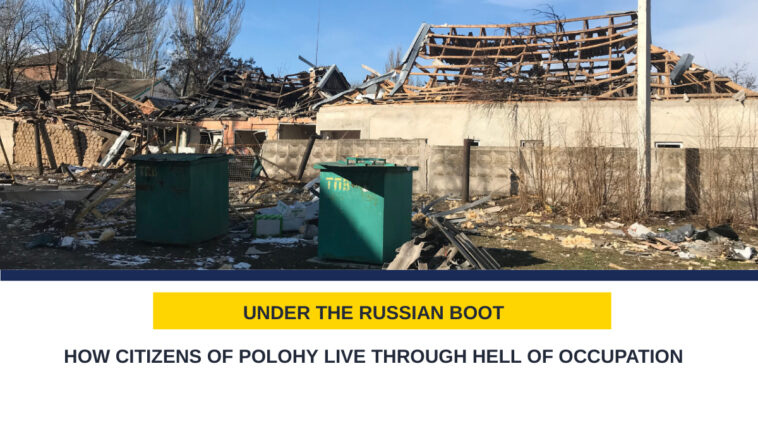 Polohy is a small town lying in Zaporizhzhia region, 18 kilometers south of Hulyaipole and 124 kilometers away from Mariupol.

Russian troops entered the town on March 3 from the direction of Tokmak. The territorial defense force of Polohy fought to defend the town, a futile effort against a larger force. Locals of Polohy did not even count the military vehicles with ‘Z’ marking entering the town as they were many.

Since the first days of occupation, Polohy was shelled with Grad rockets and other weapons. The houses were heavily damaged. There are craters in the backyards. Destruction to the houses in the center is a painful sight, locals say. A printing facility and an editorial office of the newspaper “Polohivski Visti” were reduced to ashes. A two-story public library, the Khytryi market, and a kindergarten were damaged. Windows in schools were blown out, and the hospital yard was mined. There’s hardly an intact site in the center of the town. The village of Polohy located a few kilometers away from the town was severely damaged. The locals are convinced that Russian forces purposefully destroyed critical infrastructure of Polohy. That’s what the “Russian World” entails.

There is no exact count on the number of people who left Polohy in the two and a half months of occupation. A majority of private houses and apartment buildings stand empty. Some say that up to 70 per cent of the town’s residents have left. Those who stayed say Polohy is half full. It is certain that a majority of the residents left.

Maryna, a citizen of Polohy says with tears welling up in her eyes that Polohy and adjacent villages were pounded by various weapons. The outdoor air raid warning system didn’t work. As the town is a railway node, locomotives would deliver air raid warnings to the people.

As Maryna speaks of the horrors of living under occupation, she says those are vivid memories and they will not go away. She has no right to forget, she adds.

“In the first days of March, the roar of tanks and military vehicles passing by the Chervona street was audible far beyond the site. [The town] recorded its first civilian deaths. A resident of the street was shot dead in his car as he was driving from his yard. He was barely 30 years old. That was the first death report I heard from locals. Many more such casualties followed. The citizens of Polohy, terrified, exchanged the news. A young couple was killed in one day. They came from Kyiv for a christening ceremony. On the evening, the husband went out for a smoke and was shot dead by the Russians. The terrified wife signed his name on a piece of paper and put it beside her dead husband. She then jumped into the car with her two-year-old baby and began to flee. Russians killed them as they were driving by a local shop. A young girl was killed in her apartment as a missile hit a four-story building in the Aurora district. There are many such cases. So many people went missing. It’s painful to think of how many fellow citizens were killed. The exact number is unknown,” Maryna said.

“Russian forces have a ‘kill list’, rumors say. On the list, there are war veterans, local volunteer defense force members, activists, volunteers who supply the army, journalists and opinion leaders. The occupying Russian troops also had their addresses. They ransacked some of the houses, and abducted some of the activists. They kept the abducted [activists] in a basement of a local industrial facility. My fellow citizen, a former policeman, was thrown into the basement. Many people showed signs of torture. They were alive. Many had family members searching for them. Several men were found dead in the bushes,” the woman said.

March 6 and 7 were the most terrifying days, she proceeds. Almost all citizens of Polohy stayed in the basements throughout the days. Russian troops pounded the town so hard that many sensed the death near.

“I will never forget what my brother-in-law said when our family of 13 was sheltering in a basement. We all prayed. ‘Close your ears, and open your mouths to avoid concussion!’ We all thought we were going to die. We read all the prayers we knew, asking God to save our lives. I looked death in the eyes,” Maryna said.

In the first days of occupation, power was cut off in Polohy. Russian forces deliberately damaged the power lines. Shelling made it hard to fix them. As truce settled, the head of the Polohivska hromada Yuriy Konovalenko would accompany the workers assigned to fix the damage to guarantee their security.

There was no water as there was no electricity to pump it. Cell phone signals were jammed, and the Internet went dark. People tried to stick together as much as they could. In families, four generations would come to live together. They hid together in cellars and basements. Next to no news was coming from elsewhere in Ukraine.

“For our family, radio was the only savior. We turned it on in the evening as we would light a candle. We listened to it for just half an hour as the battery was low, and there was no way to buy a new one. As darkness would settle, we would curtain the windows and go to sleep. At night, it was very loud. Russians fired indiscriminately, they still do. We slept fully dressed to escape to the basement quickly,” Maryna said.

Police stopped working from the first days of occupation. As soon as Russians entered the town, they immediately started to force the doors of shops, and loot food and cigarettes. There were locals who looted shops too, as they realized that it will go unpunished. They pillaged food, footwear, nappies, beer etc. They looted supermarket chains first. Later, they were not ashamed to break into small shops of local entrepreneurs, the woman adds.

That’s when panic began to spread. People were afraid to die not only from bullets, but also from hunger. Only one stall was selling food in the center. Serhiy, a local entrepreneur would travel to Zaporizhzhia under fire every day to buy food. He risked his life. A few weeks after, he was killed. Some say he was killed in a mine blast. Some say he was shot dead by Russians as he was carrying food supplies.

We were all conscious that a humanitarian disaster was looming. Through the efforts of the local self-government, the town restarted to bake bread. Enthusiasts supplied flour, yeast, sugar and salt. Later, several local entrepreneurs resumed the supply of food. Still there were huge shortages. People lacked money to buy critical items. Until now, ATMs are empty. No one wants to take risks delivering cash to Polohy. People have money on their cards. They would need cash to buy a majority of products. Those who have cash, are fine with food now. I feel sorry for pensioners. They do not get pensions as Ukrposhta (Ukraine’s national post) does not operate in Polohy. There are adventurers who withdraw cash for a commission. They charge UAH 80 (approx. USD 3) for each UAH 1,000 (approx. USD 34) withdrawn. I’m sorry to see the so-called carriers who use the panic to offer transportation services from Polohy to Zaporizhzhia. They charge UAH 7,000 (approx. USD 237) from a passenger. A family of three would have to pay UAH 20,000 (approx. USD 677). People were ready to give away their last savings to get out of that hell.

Later, residents of Polohy began to evacuate their fellow citizens for free and bring in humanitarian aid. As the war began, dozens of the town’s residents had to give up their jobs. Doctors-, teachers-, and journalists-turned-volunteers sorted relief items to help those who could not get food or medicine.

Lilia Maslo does not consider herself a volunteer. She did what everyone else would do. Every Ukrainian has to help as much as they can, she is convinced.

Lilia is a native of the town. Pre-war she owned an advertising agency and was an acclaimed photographer. Her adult son lives 100 kilometers away, in Zaporizhzhia. When a cell phone outage hit Polohy, she went to see him to make sure he was safe and sound. She had to travel through Russian checkpoints risking her life. Later, she decided to return back home. She took medicine, food, and hygiene items with her to Polohy. Lilia had never volunteered before. Volunteering helped her fill up her time, keep sanity, and balance out her worries.

“I could not have acted differently,” the volunteer said. “I am not alone, we are a team. There’s Viktor Hrechko, Anatoliy Popov, Tetyana and Volodymyr Fomenko, Yulia Budylo, Iryna Zhuk, Natalia Petrenko, Tetyana Levchenkova and Tetyana Khokhotva. That’s not possible to mention everyone. I am grateful to everyone who brought, packed, and delivered [humanitarian aid]. Men risked more than women. They were ordered to undress at Russian checkpoints. They were searched and threatened with death. The drivers had to wait several days for humanitarian corridors toward Polohy to open. They rarely stayed at home. No one broke down. Women collected information on medicine and food. Some delivered by bicycle relief items to people with disabilities who are bedridden and seniors. They would have to go under fire. These people are heroes of our times. I feel proud of my fellow citizens,” Lilia said.

In occupied Polohy, turbulent situation stands. Both in the day time and at night, Russians launch missile strikes on Ukrainian positions, as the road through Polohy leads to Mariupol.

Residents of Polohy who stayed have learned to live amid danger and constant attacks. Power, water, and cell phone outages are common.

People know where to buy food and get relief aid. They know how far the strikes are and when to shelter in a basement. Occupying Russian troops deliberately target civilian infrastructure.

Sixty-year-old Oksana stayed in Polohy as her mother and mother-in-law chose not to leave. Almost every day, she brings them critical supplies on a bicycle. Together they managed to plant a vegetable garden under fire. People are afraid of hunger, so they are doing what they can.

“I could not imagine in a nightmare that not only our town, but also our destinies and souls would lie in ruins. Polohy is a war zone. People try not to leave their houses without a sound reason. If they have to go to the town’s center, they need to wear white bands and not hold hands in the pockets. That’s what Russians ordered them to do. People no longer drive cars. Russians take them by force. They would take away vehicles parked in the yards or private garages. Russian troops search the houses. They look for military uniforms or weapons, check laptop and phone content. Berdiansk, Melitopol, Tokmak, Bucha, and Kyiv are often mentioned in the news. Polohy and Hulyaipole are not. When will Ukrainian troops retake this land? We very much hope that our town will soon be liberated from Russia. A life like this is exhausting,” Oksana said.

In Polohy, residents who stayed are afraid of the attacks, Russians and internal collaborationists. They don’t know what to expect of them. The citizens are incredibly united. Those who used to speak Russian, try to switch to Ukrainian. There’s mutual help. Polohy is a Ukrainian town, its citizens are convinced. They wait for [the Ukrainian Armed Forces] to retake it. They believe the liberation is near and they need to wait a little longer before the town flies the Ukrainian flag.