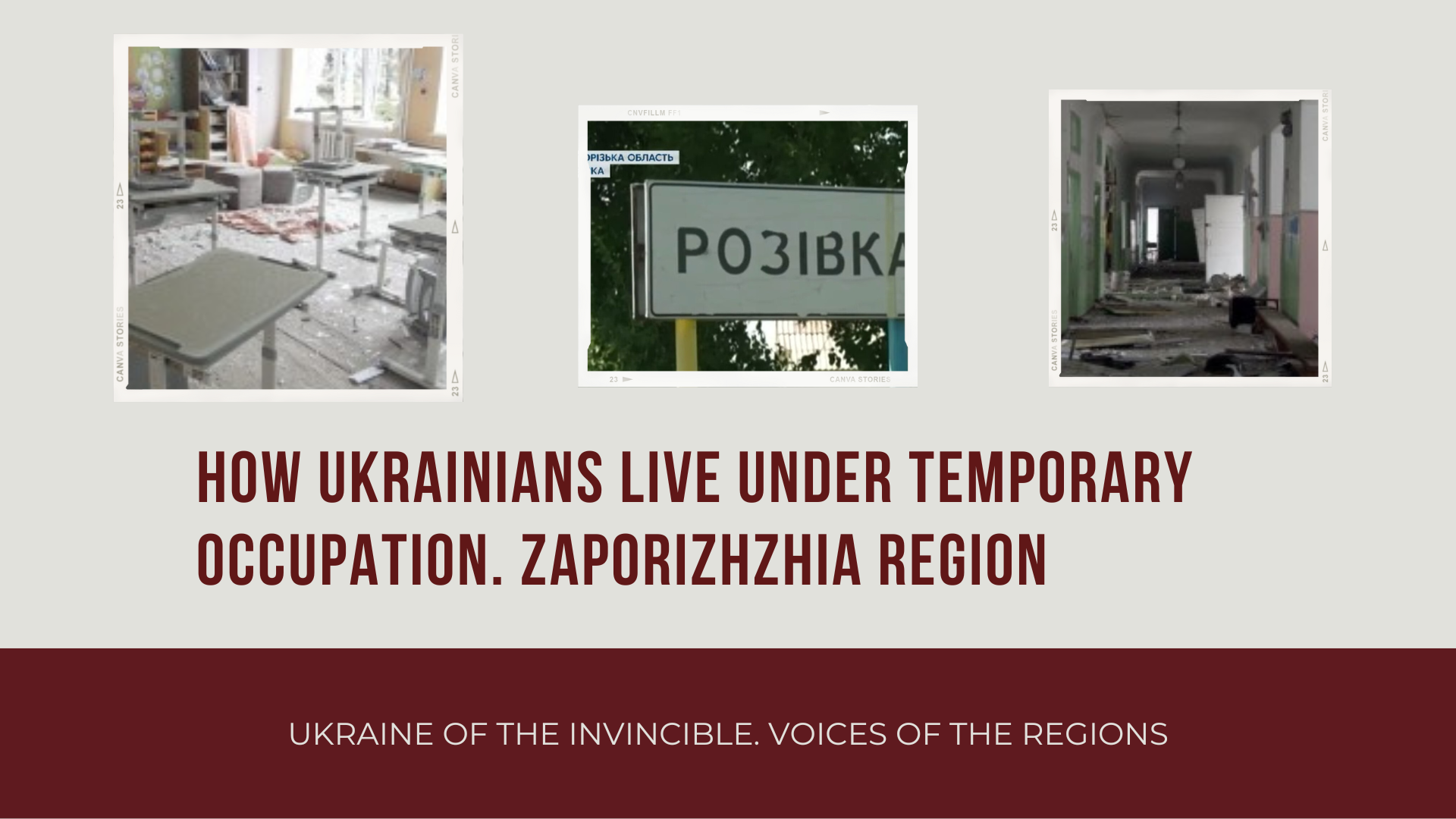 The outbreak of the war

There was a small village in the Roziv district of Zaporizhzhia region, almost on the border with Donetsk region, 90 km from Mariupol. People in that village sowed bread and barley, grew sunflowers. They were glad to see their children coming from the cities, nurtured their grandchildren, and watched Yakubovych on Fridays. They lived their daily simple lives. But on February 24 a great evil came, an invasion of “liberators”.

Iryna describes how life in the village, which suddenly became part of the “DNR”, changed. She saw how ruscists seized the village and began establishing their laws. The woman’s relatives are still under occupation, so she asked not to give her real name and not to take photos, so as not to harm them.

When the first bombings of Ukraine began on February 24, Iryna’s mother suggested that her children and their families come to the village. Everyone remembered well the events of 2014, when the Russians were interested in big cities: Sloviansk, Kramatorsk, and they didn’t need small villages. So they did. Iryna’s family from Zaporizhzhia and her brother’s from Mariupol came to their parents. Then it seemed that ruscists had a 3-day supply of food, and a week’s supply of weapons. They decided to wait it out.

But it did not turn out that way. On March 8, a column of armed men entered the village. We don’t know how much equipment it had, but at least 100 units, – the woman says. APCs and tanks lined up in 2 rows on the main street of the village. They shelled an electric generator, a water tower and a mobile antenna. Everything went out of order.

Before the arrival of enemy troops, the local authorities ordered to remove road signs with the names of settlements. “The soldiers didn’t know where they were, they asked us, – says Iryna. – We realized that they had been battered somewhere in the Melitopol district, so they were angry and scared. They immediately started looking for shelter, saying that the Ukrainian armed forces would bomb them.”

The military hid in a shelter in the basement of a local school, which the villagers had prepared for themselves.

“Highlanders” came to the village, Dagestanis – conscripts and contractors. They started rummaging houses.

“My mother bought presents for her granddaughters for March 8, everything was taken away,” Iryna continues. – I just can’t wrap my head around that. They’re soldiers, the army! They looted everything they saw: money, blenders, mixers, power tools. Everything they saw.”

They did it shamelessly and brazenly, especially rummaging through abandoned houses. They brought a car and took out everything they liked.

At a local farm, even a spool of cable was cut to pieces. The locals were astonished: soldiers of such a wealthy country, why do they need scrap metal?! …

“They started looking for wells, they wanted to wash. We say we have a central water supply system, but you damaged the tower and the generator, so there is no water, – Iryna recalls. – They wonder: do you have washing machines?”

A lot of things came as a surprise to the Russians. They were amazed by the asphalt in the village and cash registers in the shops. Russian soldiers deserve to be called “orcs”, says the woman. They destroyed everything like barbarians.

They threw people out of their households, slept in their houses, and ravaged their basements. They even tore down linoleum in the school where they stayed. Spoiled blinds, eaves, destroyed furniture. As they say, they took a dump where they lived, without exaggeration. They lived on the first floor of the school, and made a toilet on the second floor.

They were constantly bringing and repairing battered equipment from battlefields, because it was their “rear.” They drove at night. Once they crashed into a pole, felled it, as a result there was no electricity… Then they drove into the mud, and their overturned APC remained there upside down for two weeks.

“Our people knew that life in the “DNR” was not sweet,” says Iryna. – At first, in 2014-15, our friends welcomed Russians, but 2 years later they realized they got into a mess. Neither prospects nor progress. They didn’t even rebuild the destroyed Donetsk airport, nor were they going to do it. We knew that Donetsk residents couldn’t tell the truth even over the phone, they were afraid.”

Everyone, who had the opportunity, has left. Probably only the elderly found it good to live in the “DNR,” because they received 2 pensions: both in Ukraine and there.

As for the alleged voluntary vote for Rozivka’s accession to the “DNR”, this is all a staging. People were simply driven there “under guns.” We were faced with a choice: either you “cooperate” or you will have problems.

Everyone was ordered to write applications to join the “DNR” and then the RF. When preparing the “accession”, they made lists of those who needed medication or help for bedridden patients. So they gathered a base of “volunteers” for their staging.

There was one head for three villages. He came every day until he ran out of petrol. He did not cooperate with the occupiers. They did not “press” him. They were looking for those wishing to collaborate.

“There were several collaborators: drunkards, former convicts, offended by life,” recalls Iryna. “They poked their finger at those who had an expensive car, who was a hunter.”

But the most unpleasant thing happened when they found camouflage or the uniform of the Armed Forces … A week before, the villagers brought humanitarian aid to our soldiers. Someone gave his uniform to them and asked to wash it. When the Russians found it, they were furious. In the freezing cold, in an unheated room, they checked men for tattoos. They beat, detained, and hurt people.

They also reacted nervously to ordinary hunting rifles. When collaborators pointed at an owner of some hunting weapon, the orcs found his mother, father and brother in the yard. They fired on the house and “confiscated weapons.” But the gun is legal, with a safe and documents.

In a nearby village, a villain showed where the “cop’s” daughter lived. In fact, the woman’s father was a precinct officer and took his family to Zaporizhzhia. So the ruscists shot up the house, removed the air conditioner, batteries and smashed the TV set in the children’s room.

“It was very scary without information and communication, – a girl from Rozivka recalls. – When the generator was shot and there was no electricity, we charged our phones from the car battery and then listened to the radio, news. We sat in the cold, waiting for a short piece of news every half hour.”

Then the occupiers turned off the Ukrainian radio and turned on the Russian one. People tried to listen to it, but there was not a single true word about the Ukrainian events.

Occupiers’ sentiments: from a “handbook” to a curse on Putin

Iryna’s family lived under the occupation for more than two weeks.

She said, “At first we thought the soldiers were used. Later we realized that they knew where and why they were going to fight. We talked to a serviceman who said that he was amazed at how well and valiantly the Ukrainians are defending their land. He said that although he had lost his friend in Ukraine, he did not want revenge.”

They must have started to see things clearly. When we told the Russians about the Bucha massacre, they said: “It’s not us! You’ve no idea of what’s going on there; everything is getting completely out of hand.’ They gave an example of a two-day friendly fire incident.

At first they tried to be kind and said they had come to protect us. On March 8, when the store was looted, they went to a nearby village to present champagne to the girls. Shame on such “gentlemen”!

In general, they ranted on, like reciting all the stuff from a handbook about children of Donbas. They also cursed Putin in their own way. When they called home and spoke about how tough it was in Ukraine, they were reassured: “Cheer up! You are doing a good deed.”

Agriculture is in a terrible state

All agricultural warehouses were broken into and looted. No opportunity was given to start work in the field.

There is no possibility to sow, all fuel was taken away. In our village, the farm has 20 tons, in the neighboring – 40. They stole a tractor and took away the villagers’ diesel-fuelled vehicles. Local “commanders” demand that we sow, earn and give 70% of our earnings to them (“70% – ours, 30% – yours, they say”).

People have to eat, so they must fend for themselves as best they can. Behind the farms are sharecroppers who have leased their land plots to them.

Conclusion: do everything by yourselves

People listen to Arestovich. They believe that they will be returned to Ukraine. Shooting can be heard very well in the village now. Mood: ours are giving them hard time! Everyone hopes that the occupiers will be driven away.

Some people had potatoes – they shared, someone had flour. Now they go to the district center twice a week to bring bread. Those who have diesel fuel fill up the vehicles. Some bring food, others save themselves. People are trying to do everything by themselves. They have united to support one another.

“How long will they stand? I don’t know … – Iryna ponders. – There are a lot of Russian vehicles and trains. Imagine a hot summer, a piece of meat and green flies on it. It’s about them.”

There is no job in the village. There is only one job – to clear debris in Mariupol. All state employees were forced to go there, the rest – on a voluntary basis. They get paid 10 thousand rubles for clearing debris, and 30 thousand rubles for removing the dead bodies. People receive this money in food rations and not in cash.

Money is no longer needed in the village. You can’t buy anything. Pensions are not paid, postal services are not provided. If you have some savings you can spend them.

Iryna, who has returned to frontline Zaporizhzhia, is sure: she will no longer live under the occupiers! She has filled up her car and packed her documents.