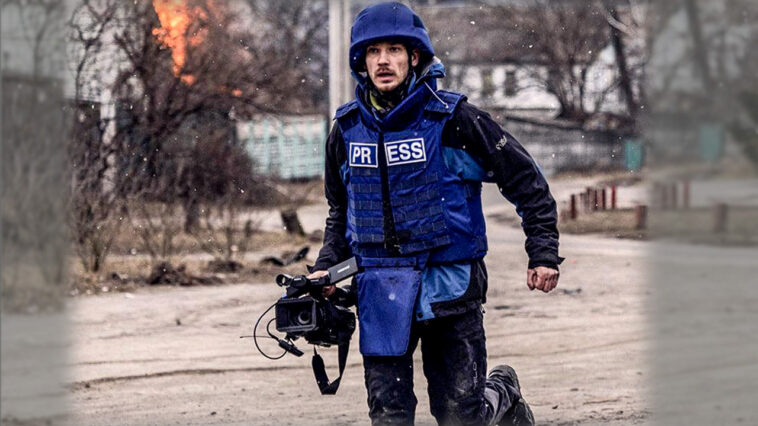 REUTERS/CARLOS BERRIA. A journalist runs for cover after heavy shelling as Russian troops advance towards the capital, in Irpin, near Kyiv, Ukraine 6 March 2022

Revealing the truth about Putin’s aggression to the world may be deadly – 12 journalists have already been killed in the war in Ukraine. They covered the war crimes of the Russian Federation and became their victims. Another 10 media workers received injuries of varying severity.

This was stated by Iryna Venediktova, Prosecutor General of Ukraine.

She informed that as of March 26, 2022, according to the Unified Register of Pre-Trial Investigations, the Armed Forces of the Russian Federation and other occupying forces committed crimes against at least 56 media representatives. 15 of them are citizens of other states. 4 citizens of Britain, 2 citizens of the Czech Republic, 2 – Denmark, 2 – UAE, 1 – Switzerland, 2 – US citizens were injured, one of whom died, as well as an Irish citizen and a Russian citizen.

On March 25, 2022, during the filming of the evacuation from bombed and depleted Chernihiv, a car of the film crews of TV channel 1+1 and Turkish TRT World came under fire. Correspondent Andriy Tsaplienko was wounded by shrapnel wounds.

An investigation into the violation of the laws and customs of war by the Russian invaders has been launched into the attack.

The Prosecutor General’s Office coordinates crimes against journalists in coordination with the Institute of Mass Media. According to their monitoring, 148 illegal actions have been committed against journalists and media in Ukraine since the beginning of the large-scale invasion.