Kyiv, 11 November 2014 – Russian mercenaries build-up and move forces right to the combat line. Concentration of terrorists’ armoured vehicles is spotted in the South-Western outskirts of Olenivka population center and in the Northern outskirts of Dokuchaevsk. “Bandits also reinforce and regroup their positions close to Mariupol at the Eastern direction. Following the same target in the cities of Torez, Snizhne, Makiivka, Shakhtarsk in Donetsk region controlled by militants full mobilization of local population is announced. ATO HQ observes and analyzes information on the movement and location of enemy’s units. Ukrainian troops are ready to provide adequate response to possible threats at key defense directions,” informed Colonel Andriy Lysenko spokesman of the Information Analytical Center of the National Security and Defense Council of Ukraine (NSDC) at a briefing in the Ukraine Crisis Media Center. 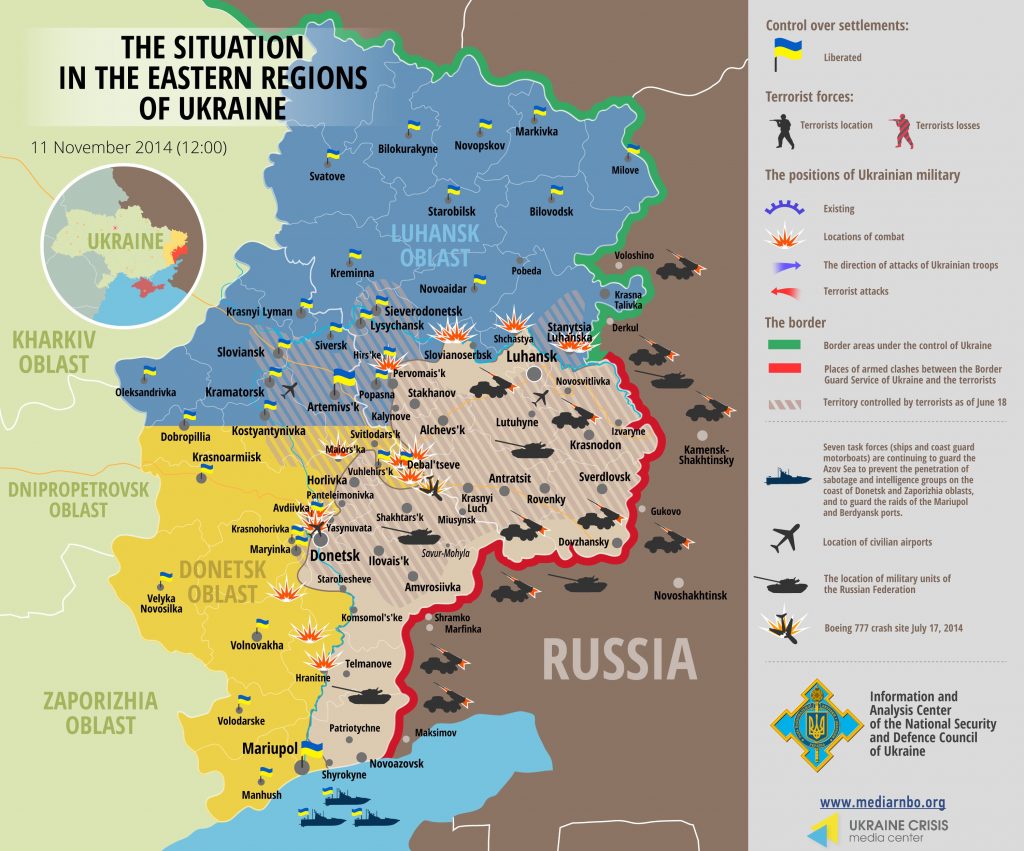 In the last day activity of the militants was concentrated at the Donetsk, Debaltseve and Luhansk directions. Near Berezove village terrorists used mortars and grenade launchers to attack the platoon stronghold. Ukrainian military repelled the attack. “The enemy lost 10 its fighters in the engagement, after that Ukrainian artillery men opened fire at the convoy that was stepping back, that makes the number of losses on terrorists’ side even bigger. Unfortunately 3 Ukrainian servicemen were killed and 3 got injured in this combat,” informed Colonel Lysenko. Militants fired three times at the positions of Ukrainian military in the airport with artillery and small arms.

Near Debaltseve militants shelled with mortars and grenade-launchers three strongholds of anti-terrorist operation (ATO) forces as well as the positions near Kamjanka. At Pervomaysk direction militants shelled with Grad MRLS and mortars the National Guard checkpoint near Krymske village, shelled with mortars national positions near Zolote village. ATO platoon strongholds outside Mariupol came under fire from artillery and small arms near Strohanivka and Hranitne villages. Near Sartana UAV of the Russian army was spotted. In the last 24 hours as a result of combat and shelling 5 Ukrainian servicemen were killed, 10 got injured. “Ukrainian side is concerned with reports that some representatives of OSCE special monitoring mission in Donbas disclose the information on the location of Ukrainian military units. We count that the mission will act in unbiased way and will not get to the actions that could undermine the trust to its activities in the Ukrainian society. Presence of international observers is being considered an important factor in providing stable peace in Donbas. This important task does not have to be ruined, as human lives depend on it,” underlined the NSDC spokesman.

Yesterday militants of the so-called “Donetsk people’s republic” shelled Avdiivka in Donetsk region. Civilians who were queuing for water came under artillery fire. As a result of this shelling 4 people got killed, 7 injured. “As per the field data and according to the testimony of witnesses the shells came from the Donetsk side – from the territory controlled by militants. Moreover power lines and residential buildings on Molodizhna street got seriously damaged,” informed NSDC spokesman.

Prime Minister of the UK David Cameron said that the Russian Federation actions force to revise the issue as to the increase of pressure on Russia with regard to shelling and supply of heavy armament from Russia to South-Eastern Ukraine observed on 8-9 November. David Cameron added that should the situation in Ukraine be not subject to change the UK is ready to increase its pressure on Russia.

French Foreign Ministry deputy spokesman Alexandre Giorgini claimed that the official Paris is concerned with more heavy military equipment without insignia being brought to Donbas as well as with increased combat activities and called on the parties to stick to the Minsk accords.