Kyiv, 29 October 2014 – The situation in the ATO-zone remains tense. We spot the maneuvers of terrorists` armed units and the units of Russian Armed Forces who are on the territory of Ukraine. Militants continue attacks at the ATO forces  in Donetsk, Debaltseve, Luhansk, Mariupol areas and near Bahmutivka way. “According to the State Border Service, the restoration of shelling of Ukrainian territory from the territory of the Russian Federation was registered yesterday for the first time since the conclusion of Minsk agreements. Artillery fire from the territory of Russia was registered in the direction of “Manotskyy (RF) – Kamyshne (Ukraine)” near one of the Lugansk detachment border posts. The number of casualties over past 24 hours is now clarified”, – informed a spokesman for the Information and Analysis Center of the National Security and Defence Council  colonel Andriy Lysenko during his media briefing in Ukrainian Crisis Media Center. 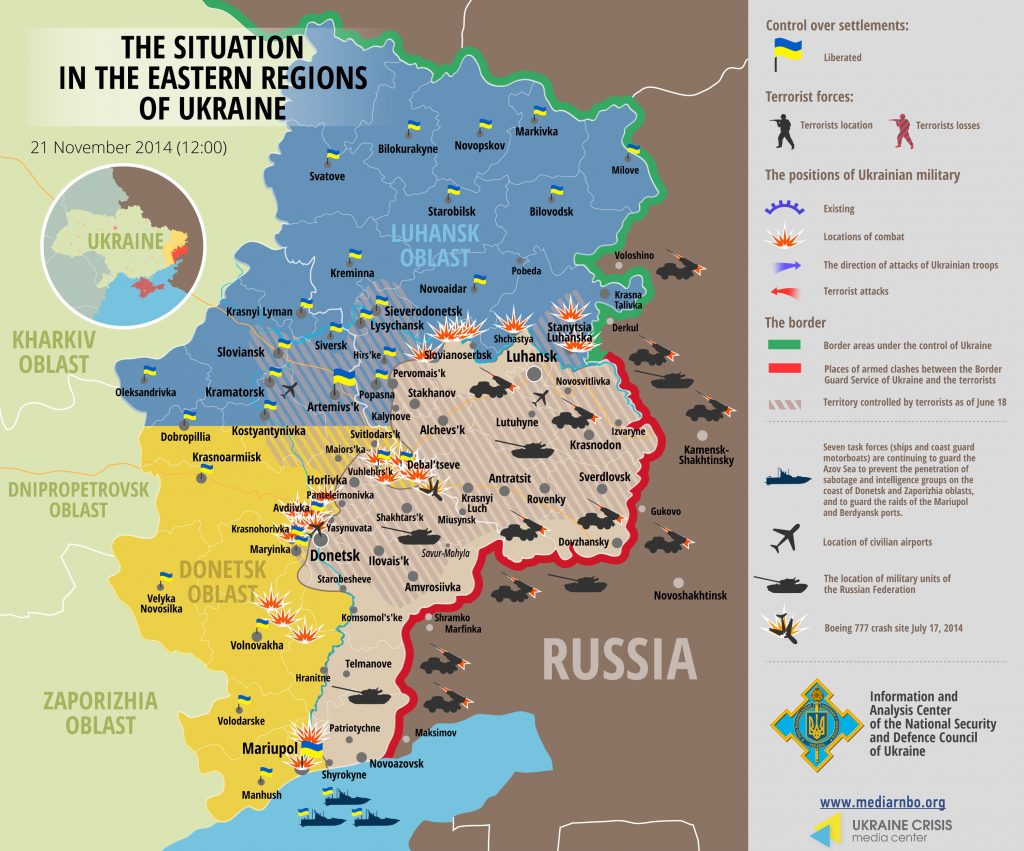 The intensity of attacks downrange the Mariupol area significantly increased. Militants in the region of the settlements Novolaspa, Starohnativka, Mykolaivka and Novotroitske repeatedly shelled Ukrainian defended posts with rocket launchers “Grad”. The positions near Talakivka were shelled with terrorists` artillery. The Ukrainian military strike back, destroying enemy firing points. “In Mariupol an explosion occurred during the passage of our military column by the side of the highway (according to preliminary data – radio-controlled explosive device exploded). 2 soldiers were injured. Criminal proceeding was started according to the Art. 258 of the Criminal Code of Ukraine (“act of terrorism”).  Near Lomakine our military vehicle tripped a land mine. As a result two soldiers were injured, “- said Colonel Lysenko.

In Donetsk area militants shelled Ukrainian positions thrice throughout the day with mortars, tanks and small arms and made another attempt to assault positions of the Ukrainian military at the airport.

There were no military clashes with the terrorists at the border outside the ATO-zone. “During the day, after a short pause, the enemy resumed conducting systematic aerial reconnaissance in the delimitation area and along the state border of Ukraine. Yesterday flights of 9 drones were recorded in the directions of Mariupol and Volnovakha, and in front of the border section under control of Sumy detachment, Russian border troops detachments conducted air patrols by means of one helicopter Mi-8. In addition, the area in front of “Red Talivka” detachment, the flight of 2 Su-25 over the territory of the Russian Federation without crossing the border was spotted, “- said Andrey Lysenko.

According to information collected, the disaffection over the terrorists increases because of the failure of any promises on wages and social benefits in the cities under the temporary terrorists` control. Information about the organization of protests in the nearest future is being actively spread among local residents. “In the cities of Donetsk and Lugansk regions leaflets appeared, calling for people to support these meetings. We would like to mention, that such meetings have already taken place in Amvrosiyivka, Torez and Yenakiyeve in the Donetsk region and in Sverdlovsk and Chervonopartyzansk in the Luhansk region. Due to the fact that terrorists have repeatedly dispersed civilians by force of arms, the locals place calls to the OSCE representatives to ensure observation of meetings and to protect people, “- said Colonel Lysenko.

The White House representative Tony Blinken during a hearing in the Congress claimed that the US is ready to discuss the possibility of provision of “defense lethal weapons” to Ukraine.  He said that the issue was never taken off the agenda and is still on the table.

MFA of Ukraine in its official comment about veto of Russian Federation upon the extension of the OSCE-mandate for Russian border checkpoints characterized the behavior of official Moscow as another proof of Russian unwillingness to implement Minsk agreements as well as deliberate restriction of the OSCE capacity to promote the peaceful settlement of the situation in the east of Ukraine. Again Russia was the only country to block the extension of the Mission mandate for extra border checkpoints, which does not allow the OSCE to implement effective monitoring along the entire section of the Ukrainian-Russian border, which is not controlled by the Ukrainian side.