Kyiv, 27 November 2014 – Situation in the anti-terrorist operation (ATO) zone remains tense and has not considerably changed. Facts testifying for the arrival of new units of the Russian troops are being confirmed. Build-up of the enemy’s forces at the Donetsk direction continues – terrorists and Russian troops are possibly preparing another attack on the Donetsk airport. “Yesterday at midday time terrorists fired at the OSCE patrol comprising three monitors while it was moving between the Ukrainian army checkpoints near population centers Kirovo and Shumy North East of Donetsk. According to the OSCE’s official report after one of the monitors left the vehicle a shot from a rocket grenade launcher was fired from the South East (location of pro-Russian terrorists). The rocket hit the ground in 150 meters from the vehicle. Two seconds after several shots were fired from a 23-mm antiaircraft cannon, the shells hit the ground in two-three meters from the vehicle. There were no victims as a result of the shelling. Ukraine condemns the attack on the OSCE SMM members by pro-Russian separatists,” informed Colonel Andriy Lysenko spokesman of the Information Analytical Center of the National Security and Defense Council (NSDC) at a briefing in the Ukraine Crisis Media Center. 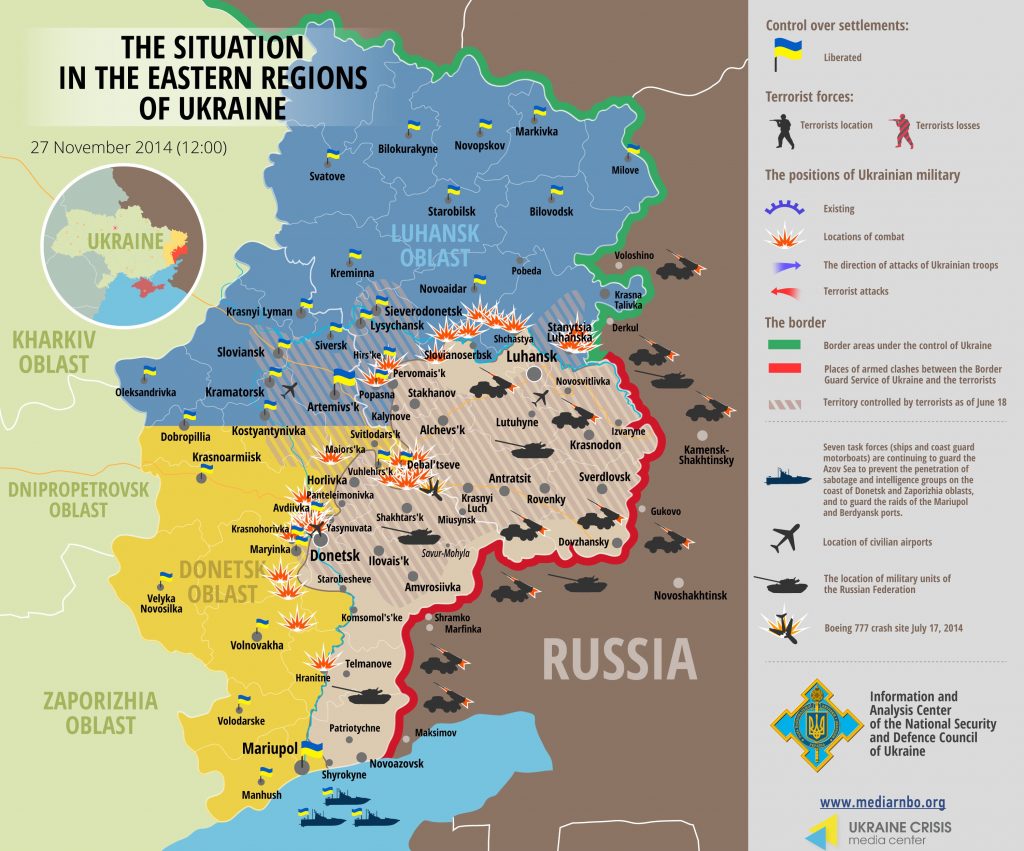 Main directions for attacks and shelling of Russian mercenaries remain unchanged. Ukrainian artillery was applied 36 times and exclusively to return terrorists’ fire. At the Donetsk direction within the last day militants struck at Ukrainian military positions from Grad multiple rocket launchers near Novokalynove village of Yasynuvata district. Terrorists fired at ATO checkpoints and strongholds from artillery and mortars near population centers Avdiivka, Pisky, Opytne, Vesele, Krasnohorivka, Berezove, Taramchuk and Novomykhaylivka. In the outskirts of Horlivka militants shelled our positions with mortars and antiaircraft mounts near Shumy village.

Positions near Shchastya were shelled with Grad rocket launchers and grenade launchers. Yesterday at Stanychno-Luhanska section border guards spotted again the UAV flying at the Yelan (Russian Federation) – Kamyshne (Ukraine) direction. After that our positions near Stanytsia Luhanska and Vilkhove population centers were shelled with artillery, mortars and grenade launchers. Our artillery men destroyed terrorists’ firing points with precision fire.

Within the last day militants fired at ATO positions 50 times, as a result 5 Ukrainian defenders were wounded. There are no killed Ukrainian servicemen.

Yesterday militants kept firing at the population centers on the Ukraine-controlled territory of Luhansk region. Population centers Krymske, Shchastya, Stanytsya Luhanska, Chornukhyne, Tryokhizbenka, Zolote and Hirske came under fire from various types of weapons including artillery, Grad systems and mortars. As per the information ATO HQ received yesterday 2 civilians were killed, 8 got wounded.

The President of Ukraine Petro Poroshenko had a meeting with NATO Supreme Allied Commander Europe, Commander of the U.S. Europe Command General Philip Breedlove. General Breedlove stated that the Alliance is concerned with the combat capacities of the Russian troops stationed at the border with Ukraine as they have an actual opportunity to cross the Russian-Ukrainian border and provide for continuous supply of the necessary armament to the militants in Donbas. General Breedlove said Russia is building up its military presence in the annexed Crimea. Stationing of coastal defense cruise missiles and surface-to-air missiles in Crimea changes the balance of powers in the Black Sea region, NATO is concerned that Russia could use Crimea as a foothold to launch attacks. NATO also continued to watch for indications that Russia might move nuclear capabilities onto Crimea.