Kyiv, November 29, 2014. This week confrontation between gangs of terrorists in the Luhansk region acutely escalated. Thus, the militants publicly accuse each other of embezzling and stealing goods brought from Russia. Fights for the control of territories and ability to rob them become tougher. For example, the OSCE observers reported on the systematic export of Ukrainian coal to Russia through the border crossing points controlled by the terrorists. This was stated by the Deputy Head of the Information and Analytical Center of the National Security and Defense Council of Ukraine Volodymyr Polevyi at the briefing at the Ukraine Crisis Media Center. 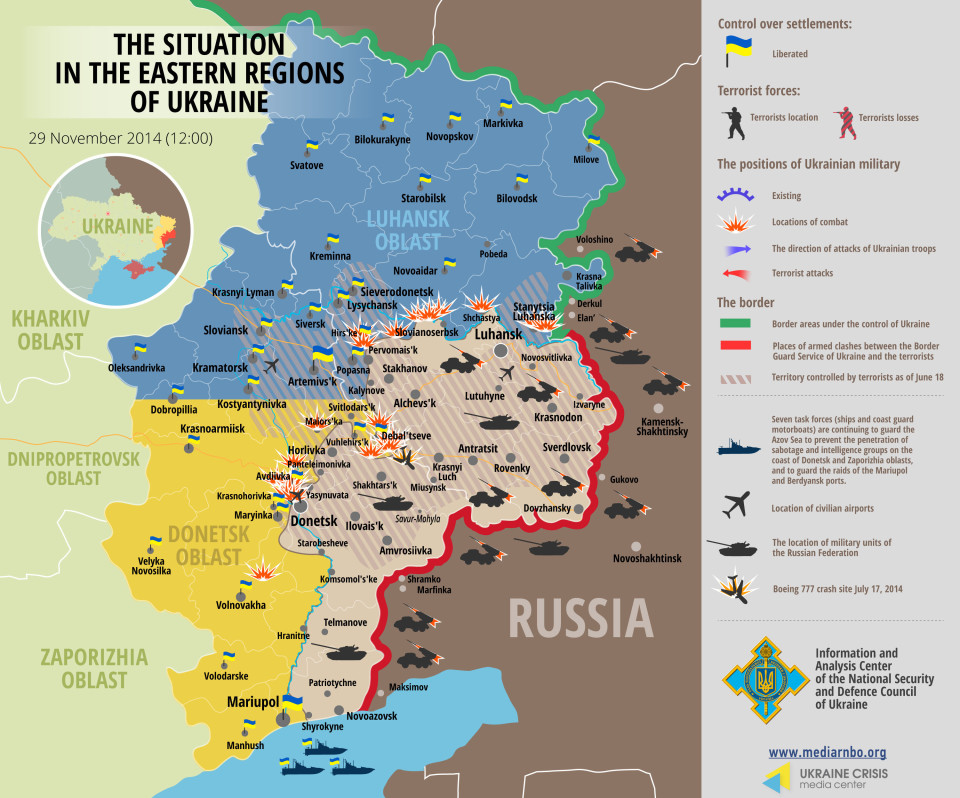 Yesterday militants of the “LNR” terrorist organization attacked a gang of Don Cossacks in Antratsit, in particular, the militants launched an armed attack on the Cossacks “military commandant’s office.” In the assault, at least 12 terrorists were killed, including the “commander” of the city. It should be noted that yesterday’s clash was recognized by the terrorists themselves. “Head” of “LNR” referred to the operation as “disposing of a gang.”

Positions of the Ukrainian military were subjected to fire both in Debaltsevo direction and in the area of Bakhmutivska highway. Militants used artillery, mortars and grenade launchers. In Pervomayskyi direction militants opened fire from MLRS BM-21 “Grad”. The situation in the Luhansk region remains tense: militants fired from artillery, mortars and small arms at bases and checkpoints of the ATO forces nearby Stanytsia Luhanska, Shchastia, Vilkhove, and Heyivka.

During the past day one Ukrainian soldier was killed, 11 more were injured.

Commenting on the situation in the territories occupied by militants and Russian military, the speaker reported on the increasingly exacerbating humanitarian situation. Local population experiences problematic access to water, gas, electricity, heating, medical supplies, transportation, food, and the lack of money, which results in the rapid growth of dissent among the locals.

Food and other goods imported to the occupied cities are under the control of militants and are kept at warehouses or stolen by the terrorist groups.

As a result of active hostilities in the Donetsk region, 34 settlements have no electricity.

Commenting on international support for Ukraine, Polevyi reported that the EU Official Journal published an additional list of 13 individuals and five legal entities which, according to the EU, were acting against the territorial integrity of Ukraine. Sanctions against such persons take effect from the date they are published.