Kyiv, 26 January 2015 – The situation on the territory of Donetsk and Luhansk regions remains complicated. “Illegal criminal groups “DPR” and “LPR” as well as the Russian Federation Armed Forces are conducting active combat actions aiming to widen the conflict area and increase the territory they control. At all directions in the anti-terrorist operation (ATO) zone terrorists fired several times at Ukrainian military positions with artillery, mortars, grenade launchers, tanks and Grad multiple rocket launchers. Fierce combats are ongoing near Sanzharivka village of Artemivsk district in Donetsk region. Militants attacked the platoon stronghold of the Ukrainian Armed Forces having shelled it with BM-21 Grad multiple rocket launcher systems 6 times,” said Deputy Head of the Information-Analytical Center of the National Security and Defense Council Volodymyr Polevyi at a briefing at the Ukraine Crisis Media Center. 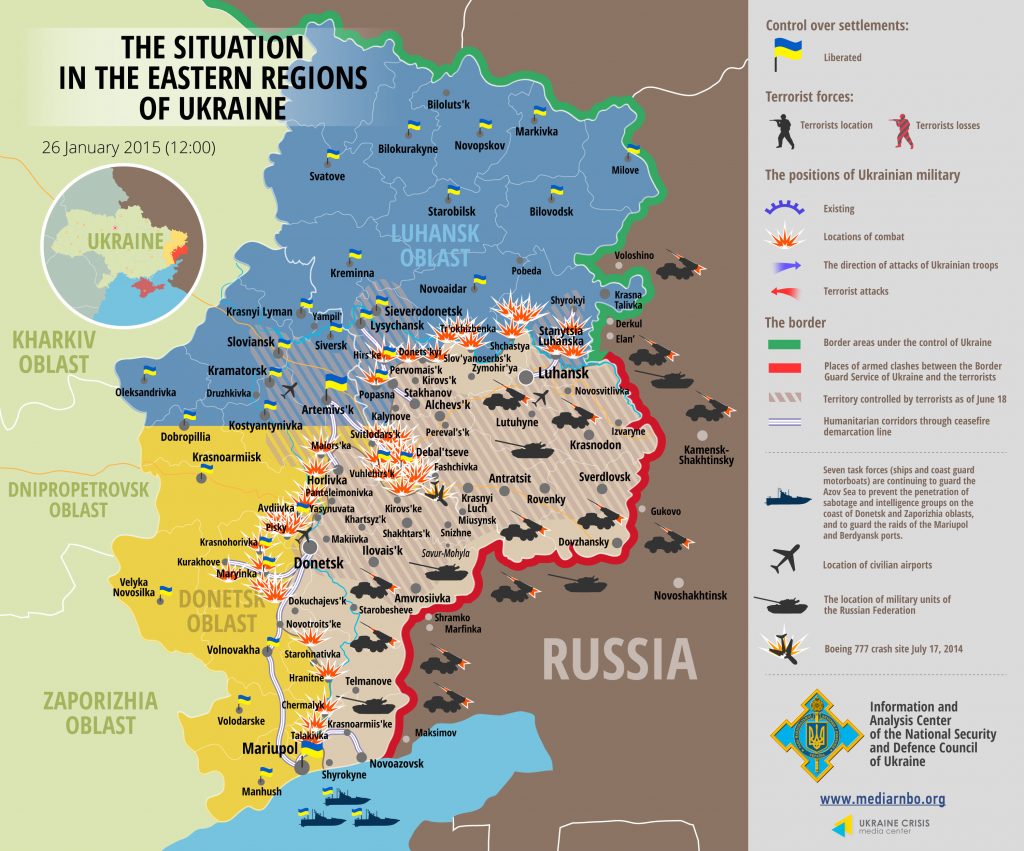 Due to numerous incidents of shelling the access via the control point “Hnutove” at the “Novoazovsk-Krasnoarmiysk-Talakivka-Mariupol” road direction has been temporary stopped. The control point “Stanychno-Luhanske” that has got a nearby bridge damaged also remains closed. “In the last day 7 Ukrainian servicemen were killed, 25 got wounded,” noted Volodymyr Polevyi.

As per the operational information illegal armed groups are stamping the citizens’ IDs (including passports, employment record cards, medical certificates, certificates issued by public housing offices etc.) with the stamps of the so-called “DPR” and “LPR”. “We herewith remind that any illegal notes in the documents make them invalid,” emphasized the Deputy Head of the Information-Analytical Center of the National Security and Defense Council.

As per the intelligence information Russian aviation has intensified its activities near the border with Ukraine. IL-76 transport aircraft were spotted landing several times at the military airdrome in Rostov-on-Don with unknown cargo. The Russian Federation is amassing military potential of its military air force on the territory of the occupied Crimea by illegally using the airdromes of the Ukrainian Armed Forces. “Measures to widen the system of basing for the strike and ground attack aircraft are being implemented. Reinforcement of the Russian air assault units with Mi-24 helicopters and IL-76 transport aircraft comes as a testimony to this fact. Earlier in the beginning of January up to 50 units of Russian attack helicopters were deployed to the military airdrome near Dzhankoy. A separate regiment of unmanned aerial vehicles is being formed as part of the naval aviation of the Black Sea Fleet of the Russian Federation. These days the naval aviation of the Black Sea Fleet of the Russian Federation is conducting flight combat drills including the missiles launch at the “Opuk” military training ground (at the Kerch peninsula of the Autonomous Republic of Crimea). All airdromes of the naval aviation currently exploited by the Black Sea Fleet of the Russian Federation are being used to operate these flights,” explained Volodymyr Polevyi.

Due to the escalation of the Russian aggression against Ukraine and the terrorist act in Mariupol an extraordinary session of the National Security and Defense Council was held yesterday, it was chaired by the President of Ukraine. Petro Poroshenko stated that Ukraine is in possession of incontestable proofs of the Russian Federation’s support for the terrorists in Donbas as well as of its complicity in the terrorist act in Mariupol on 24 January. The National Security and Defense Council has adopted a row of measures to counteract the threat coming from Russian and that from acts of terrorism on the territory of Ukraine. Among the decisions adopted are the state defense order to supply the Ukrainian Armed Forces, the National Guard and other military formations with the new weapons and military equipment; mandatory application of sanctions introduced by the EU member states and the US on the territory of Ukraine; address to the International Criminal Court (Hague Tribunal) re crimes against humanity committed by the illegal armed groups against Ukrainian citizens as well as re recognizing “DPR” and “LPR” terrorist organizations.

Authorities and military command of Mariupol are consolidating efforts to defend the city and help peaceful locals: operational HQ and 2 warming centers supplied with food, medicine and necessity items have been set up and are operational 24/7 to help the affected citizens. “Law enforcers took under their 24/7 control all facilities in Ordzhonikidzevsky district of the city that were damaged by militants’ shelling in the morning of 24 January. Police units are patrolling the whole territory of the city and are securing public order. Yesterday a working group of the Ministry of Social Policy departed to Mariupol. The Ministry experts have to urgently decide on the spot the issues of organization and provision of the required aid to population by the centers for social welfare,” explained Volodymyr Polevyi.

US Secretary of State John Kerry in a telephone conversation with the Russian Minister for Foreign Affairs Lavrov condemned the shelling of Mariupol by separatists as well as their other attacks that blatantly violate the Minsk agreements. John Kerry underlined that in case these attacks continue, the “price for such acts” for Russia will increase.