Kyiv, April 4, 2015. Serial production of Dozor-B armored vehicle has been launched at the Lviv arms plant. The vehicle showed excellent results in the field. Ukrainian Armed Forces mobilize military equipment and personnel, as well as conduct a new round of war games, stated Col. Andriy Lysenko, ATO spokesperson, during the press-briefing at Ukraine Crisis Media Center. 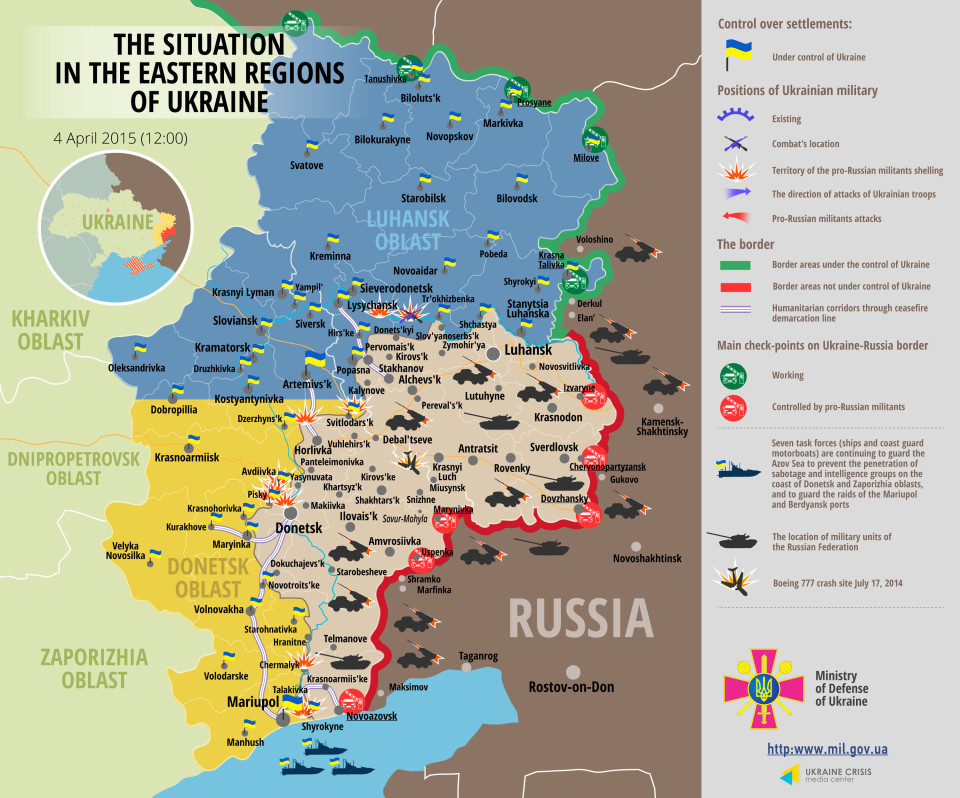 Col. Lysenko said that Russia-backed militants have violated ceasefire, using tanks, 122-mm mortars and the artillery five times. They have been particularly active by the Donetsk airport, attacking Ukrainian positions close to Avdiivka and Opytne; more than half of all ceasefire violations occur in this area. Also, three Ukrainian servicemen were killed and two more got injured as a result of mine explosion near Avdiivka. “Ukrainian Armed Forces did not suffer any other casualties,” the ATO spokesperson noted.

Other hotspots of the conflict include Shyrokyne and Berdyanske near Mariupol, as well as Mayorsk, Krymske and Nizhne. In the meantime, Ukrainian servicemen spotted one enemy UAV by Mariupol.

Ukrainian intelligence reports that “LPR” militants conduct census of the working population, which could be forcefully mobilized in the future.

Ukraine’s Security Service detained two suspects in collaborating with pro-Russian militants. One of them had fresh wounds the origins of which he could not explain. Another suspect is a woman who had topographic map of the Donetsk region with markings; she failed to explain what these marks were for. The suspects were transferred to the Ukrainian law-enforcement agencies for further investigation.