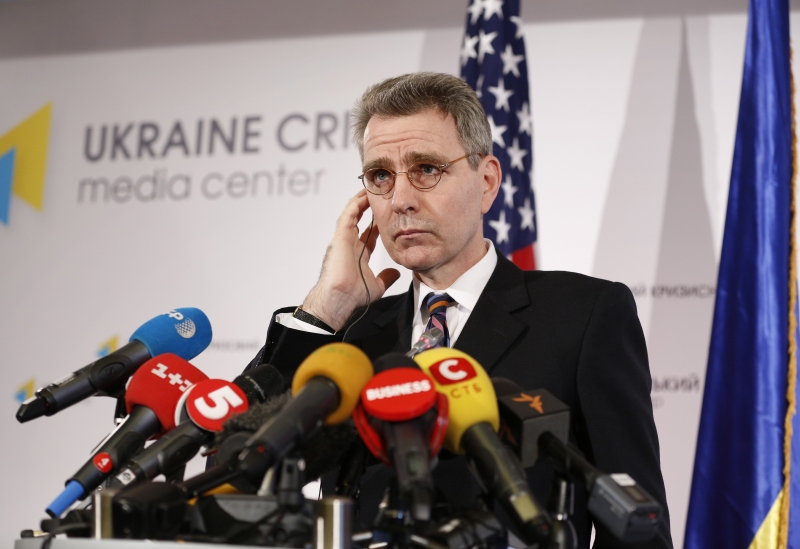 Kyiv, April, 29th, 2014 – The Ambassador of the United States to Ukraine Geoffrey Pyatt at the briefing at Ukrainian Crisis Media Center claimed: “Russian troops crossing Ukrainian border is sharp escalation. It would produce tragic consequences and sharp reaction from the US”. He also said: “Sanctions are aimed to encourage Russia to find diplomatic solutions, to deescalate the situation. Sanctions is not the end, it’s a process aimed at changing Russia’s activity”.

He also noted that it’s a crisis that should be resolved through diplomacy: “So our emphasis has been on non-military assistance. Ukrainian authorities’ actions in the east of Ukraine have been prudent. We continue working with our security counterparts in Ukraine. Our advice would be to continue as set and prevent weapons and money trafficking. Our key leverage is the Geneva agreement, which obliges all signatories including Russia to put down arms and leave captured buildings”.

Concerning the current situation in eastern Ukraine, in particular in Luhansk, Mr. Pyatt said that these events will obviously deteriorate the situation.

Commenting on the upcoming Presidential elections, the Ambassador noted: “Arguably these are the most important elections in Ukrainian history. We expect a large OSCE mission to be deployed. It’s important that the elections reflect the will of Ukrainian people”.

Mr. Pyatt underlined that the US stance falls within the commitment to the idea of Ukraine’s territorial integrity: “This is a time when the country has to pull together. Nothing is more important than national unity”.

Geoffrey R. Pyatt, a Senior Foreign Service officer, arrived in Kyiv on August 3, 2013 as the eighth United States Extraordinary and Plenipotentiary Ambassador to Ukraine. His 24 year State Department career has ranged from Asia to Europe and Latin America.