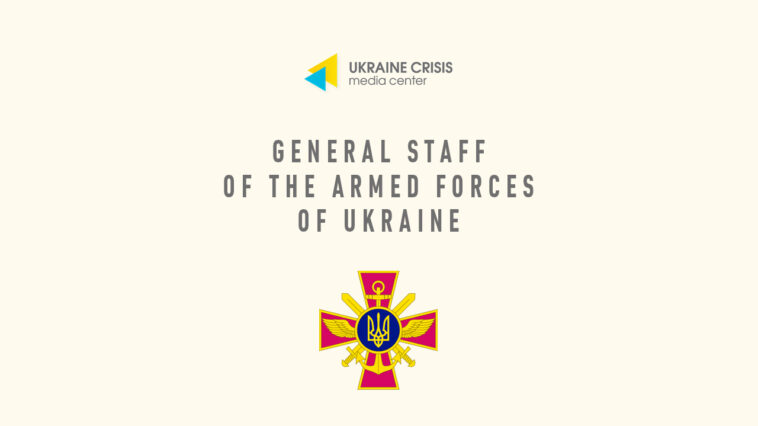 General Staff of the Armed Forces of Ukraine: The seventeenth day of the heroic resistance of the Ukrainian people to the russian military invasion continues.

The enemy continues its offensive against Ukraine.

The enemy carries out measures to restore combat capability and regroup troops, as well as prepares for the continuation of the offensive in the Polissya, Siversky, Slobozhansky, Donetsk, Tavriya and South Bug areas.

Throughout the fighting on the territory of Ukraine, the enemy met with fierce resistance. It did not achieve the goal of the operation in any of the areas. The nature of the actions indicates the uncertainty of the military leadership of the russian federation in matters of strategic objectives and the ultimate goal of the so-called “special military operation”.

The occupying forces inflicted heavy losses, slowed down the pace of the offensive, and stopped in the vast majority of directions. Military and civilian infrastructure continues to be destroyed. In order to compensate for the losses, the occupiers organized the training of additional forces and means for conducting hostilities on the territory of Ukraine.

No active offensive actions of the enemy were recorded in the Polissya direction. Measures are being taken to restore combat capability and regroup troops. The enemy is trying to reconnoitre and clarify the positions of the Armed Forces of Ukraine and possible ways of attack. The occupiers continue to tax the logistics system by creating repair bases on the territory of the Republic of Belarus.

In the northern direction, the enemy focused on improving the operational construction of troops and the logistics system of the group.

In the Slobozhansky direction, the enemy carried out offensive operations in the area of settlement Izyum, further trying to move in the direction of settlement Slavyansk. After the losses received in the area of the city of Kharkiv, he withdrew to the territory of the rssian federation (Belgorod region) one of the BTGs of the 6th All-Military Army to restore combat capability. At the same time, it strengthened the groupings in this direction due to the introduction of units from the Northern Fleet.

In the Donetsk and Tavriya directions, the enemy carried out assault operations and fire raids. It does not abandon attempts to storm the city of Mariupol. The Russian occupiers are trying to prepare reserves and go on the offensive in Severodonetsk, Ugledar and Zaporizhya. The enemy has had little success in the Volnovakha direction – it has captured the eastern outskirts and is trying to move on.

At the same time, the enemy does not refuse to attempt an offensive on Kryvyi Rih. It did not succeed. It looks for weaknesses in the defence of Ukrainian defenders. In order to increase efforts, puts into operation reserves from the Airborne Forces. In some areas it is trying to keep the previously occupied borders.