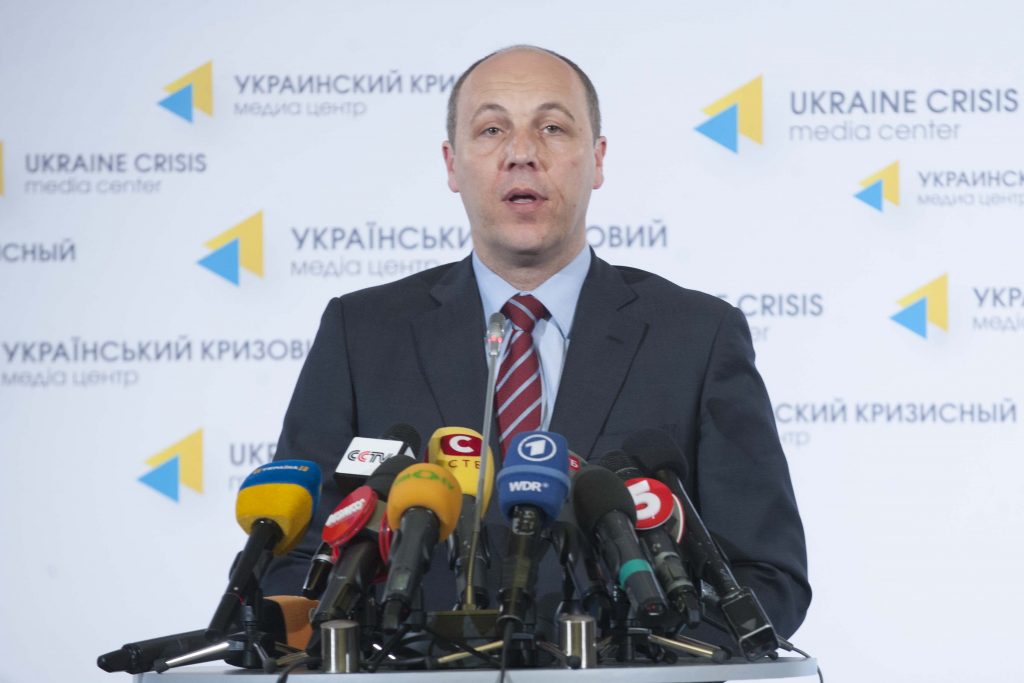 Kyiv, May,8th, 2014 – Andriy Parubiy, the Secretary of the National Security and Defense Council during the briefing at Ukrainian Crisis Media Center said: “I want to say with full responsibility that no referendum on the territory of Donetsk and Luhansk oblasts is being prepared or can be carried out. You can’t undo something that does not exist. This is a scam coordinated by Russia”.

Also, the Secretary of the NSDC said: “Yesterday a meeting with the representatives of the CEC and the security forces was held, where we discussed the preparations for the presidential elections. We have taken a number of decisions that will ensure the elections, which is the sacred right of a citizen to elect the government. Decisions about the possibility of newsletters protection were made. We also plan to involve public and self-defense battalions formed at the Ministry of Internal Affairs. Today another meeting will be held with the Acting President.

Regarding the statement made by the President of Russia Mr. Parubiy said: “His statement is a paltry that shows double standards and has no relation to reality. Tonight the checkpoints in Slovyansk and the border unit on the edge of the Donetsk and Lugansk regions were attacked. The Ukrainian military rebuffed the terrorists with dignity.

Also the Secretary, said: “Given the fact that actually we are facing a war where armed forces, sabotage groups, civilians, and information warfare are used, despite the fact that our boys confront militants, equipped with the most modern weapons, Ukrainian parliament decided to provide participants of the anti-terrorist operation with a status of war veterans with appropriate social benefits.

Regarding the reformatting of the Maidan Self-Defense activities Mr. Parubiy said: “Everyone has the right to choose whether to join the National Guard. Those participants of self-defense in the east and south are the real heroes. They take arms and defend Ukraine, where there is a threat, not talking about how to do it properly. For example, Nikolay Yakubovich, who returned wounded from Donbass, is showing a good example now in Odessa.

Mr.Parubiy commented on the threat of provocations on May 9th as well: “We urge people not to fall for them. Fighting terrorism is extremely difficult. Terrorists are coordinated and financed by the Kremlin, so I always repeat that the crisis is not in Slovyansk, it is in the Kremlin”. He added: “The Security Service has identified cash flows through which separatists are funded, but these people would not fund terrorism in Ukraine if they weren’t supported by the Kremlin”.

Andriy Parubiy is the Secretary of the National Security and Defense Council of Ukraine (from February 27, 2014). MP of Ukraine of the 6th and 7th convocation. Member of the All-Ukrainian Union ” Batkivshchyna’’ Ex Commandant of Maidan Self Defense.