Kyiv, June 21, 2015. Active fighting resumed in the Mariupol sector; geography of skirmishes between the Ukrainian troops and Russia-backed militants expanded as well. Beside using small arms, pro-Russian militants fired from 122mm “Gvozdyka” artillery systems in the area of Shyrokyne. Ukrainian forces engaged in combat in Lebedynske and Pavlopil. Passage via “Hnutove” checkpoint has been suspended due to the mortar shelling of the area, said Colonel Andriy Lysenko, spokesman of the Administration of the President of Ukraine on ATO related issues, during the press briefing at Ukraine Crisis Media Center. 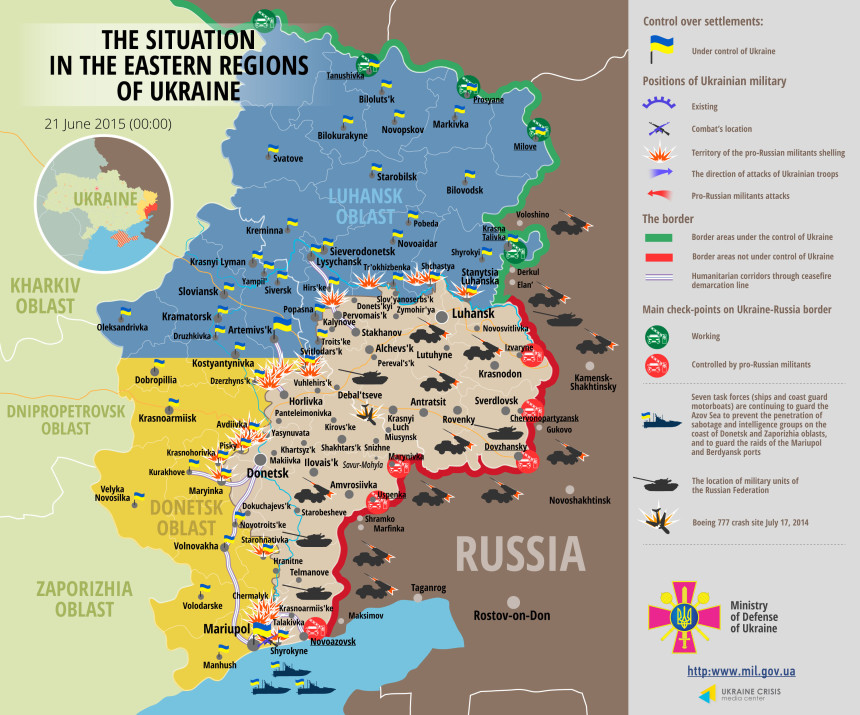 Col. Lysenko reported that the epicenter of fighting in the Donetsk sector focused on the western edges of the city – airport area, Maryinka and Krasnohorivka. More than a half of ceasefire violations occur in the region – enemy snipers are most active, while militants use heavy artillery. “Our skillfully organized line of defense prevents the enemy from advancing further,” Col. Lysenko noted.

Pro-Russian fighters also targeted outskirts of Horlivka with 152-mm artillery. According to Col. Lysenko, Ukrainian intelligence reports that militants have concentrated a large number of heavy weapons near the city in breach of Minsk accords.

Ceasefire was generally holding in the Luhansk sector. Isolated armed provocations have been observed in the area stretching from Zolote to Stanytsia Luhanska. No record of militant use of heavy artillery or missile systems was observed.

OSCE monitors have documented more violations of Minsk agreements on the militants’ part: movement of two T-72 tanks from the militant-controlled city of Shakhtarsk; four armored vehicles and 11 T-72 tanks proceeded east through Zuhres. The monitoring mission’s UAV detected a concentration of ten tanks and 27 armored vehicles in Komsomolske as well as four 122-mm self-propelled “Gvozdyka” artillery pieces by Vasylivka village. “These towns are located close to the demarcation line established on September 19, 2014, therefore militants have to withdraw heavy military equipment from these territories,” Col. Lysenko said.

Ukrainian border guards spotted three flights of enemy UAVs that the militants use to conducted aerial reconnaissance of the Ukrainian military positions.

Two Ukrainian servicemen were killed in action and six got wounded in the last 24 hours.