Kyiv, July 10, 2015. International observers registered an amassment of militants’ heavy military equipment close to the combat line in the Mariupol sector. “UAV of the OSCE Special Monitoring Mission registered seven tanks, 30 APCs and at least 37 military trucks near Komsomolske. Additionally nine tanks, eight APCs and one truck were spotted near Sontseve; four tanks, 26 APCs and 34 trucks near Bezimenne; three tanks near Michuryne and two tanks near Sakhanka,” said Colonel Andriy Lysenko, spokesman of the Administration of the President of Ukraine on ATO related issues, at a press briefing at Ukraine Crisis Media Center. 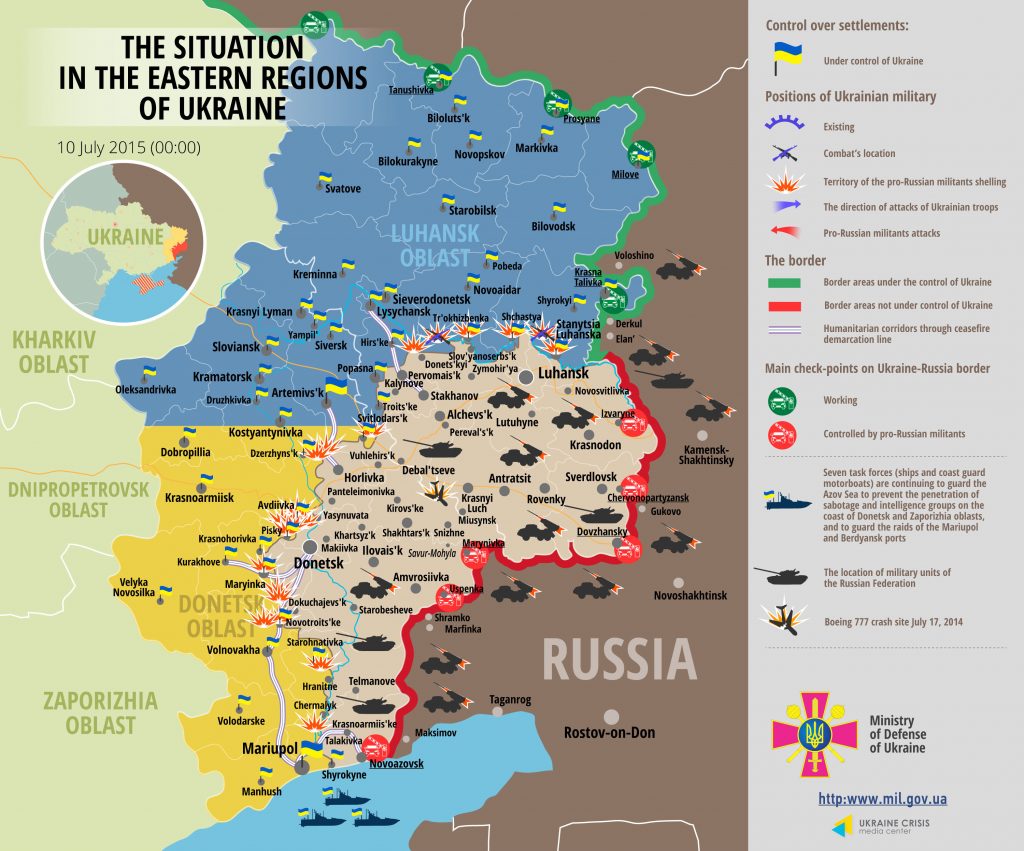 In the Mariupol sector, active fighting was occurring east of Volnovakha. The enemy used high-caliber mortars, 152-mm cannons and tanks near Novohryhorivka. Hranitne village was shelled with heavy weapons from the northern-eastern direction. No ceasefire violations were registered in the section between Hranitne and the Sea of Azov.

In the Luhansk sector, active combat operations were conducted between Stanytsia Luhanska and Krymske. In the morning on July 9, Ukrainian troops repelled the attack of the enemy’s subversive-reconnaissance group that crossed Siversky Donets river. Another combat engagement took place near Krymske, militants were forced back to Sokilnyky. Ceasefire violations by militant groups were also registered in Stanytsia Luhanska, Shchastia, Tryokhizbenka and Novotoshkivske.

Near Svitlodarsk and Horlivka in the Donetsk sector, the situation has stabilized: militants conduct provocations using only small arms. In the area of the airport, the enemy is active in three locations: Avdiivka, Opytne and Pisky. “Militants concentrate their forces in the destroyed Donetsk airport and in Spartak village. They have also used mortars and artillery to numerously shell the area near Berezovka and Taramchuk villages, located between Maryinka and Dokuchayevsk,” explained Andriy Lysenko.

Two Ukrainian servicemen were killed in action and ten were wounded over the last 24 hours.

Operative staff in Mariupol discovered an explosive device installed near a public transportation stop. The explosive device included 200g of TNT, a detonator with a timer, a battery, nails, nuts, screws and other dangerous elements. “The explosive was discovered thanks to a timely call by a Mariupol local. The law enforcers expressed gratitude for the cooperation and ask for locals to stay attentive and to call the hotline to help avoid casualties and prevent militant provocations,” added Colonel Lysenko.

Ukraine’s Security Service uncovered a cache with ammunition in Znamenivka, Dnipropetrovsk region and seized two RGD-22 grenade launchers, a Kalashnikov rifle, six F-1 grenades, an RGD-5 and ammunition. Policemen also detained a man in downtown Dnipropetrovsk. They discovered 24 grenades to a grenade launcher, over 500 rounds to a Kalashnikov rifle and other munitions brought from the ATO zone for sale. The detained individual faces anywhere from 3 to 7 years in prison.

In the Luhansk sector near the town of Myronivsky, Donetsk region law enforcers detained both two mini-buses with illegal cargo and an organizer of the massive goods supply channel to the occupied territories. Vehicles were loaded with food, detergents and cigarettes.