Kyiv, July 13, 2015. During the last 24 hours, only one armed provocation from the Russia-backed militants was registered in Shyrokyne in the Mariupol sector. There were no lethal casualties amongst Ukrainian servicemen over the last day, said Colonel Andriy Lysenko, spokesman of the Administration of the President of Ukraine on ATO related issues, at a briefing at Ukraine Crisis Media Center. 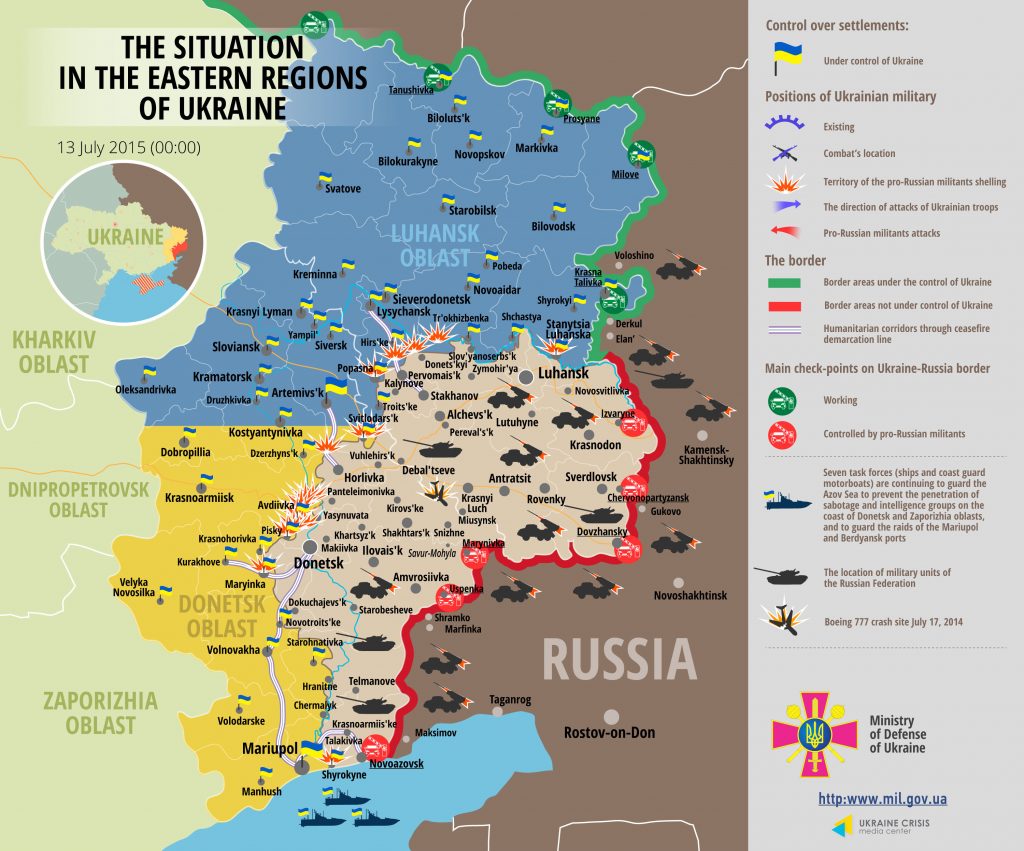 In the Luhansk sector, the enemy has been active mostly during the night. “The militants conducted a series of shelling incidents on Stanytsya Luhanska. There was no major destruction, but water and power supply systems in the district’s center got broken. Ukrainian Armed Forces also recorded enemy mortar fire by Krymske, Novotoshkivske and Zolote, while Popasna was shelled from the 152-mm artillery,” Col. Lysenko said.

In the Donetsk region, militants fired from 152-mm artillery at Svitodarsk and Luhanske. Isolated armed provocations have been recorded in the outskirts of Horlivka, namely Mayorsk, as well. Moreover, Russia-backed fighters instigated intense artillery and tank fire on Verkhnyotoretske located between Horlivka and Yasynuvata. Ukrainian troops came under fire near Novoselivka Druha and Kamyanka villages. “The enemy amassed heavy weapons close to Panteleymonivka and actively uses them. Incessant fighting continues near the airport, namely in the area stretching from Avdiivka to Pisky. No ceasefire violations were registered to the southwest and south of Donetsk,” Col. Lysenko said.

Five Ukrainian servicemen were wounded in action in the last 24 hours.

According to Col. Lysenko, Ukraine’s Security Service blocked the militants’ trade channel to Russia. “Ukrainian operatives and the State Fiscal Service officers detained the employees of a militant-controlled transport company. More than 4,000 clean waybills for international cargo transportations from Russia to the militant-controlled territories were confiscated,” Col. Lysenko reported.