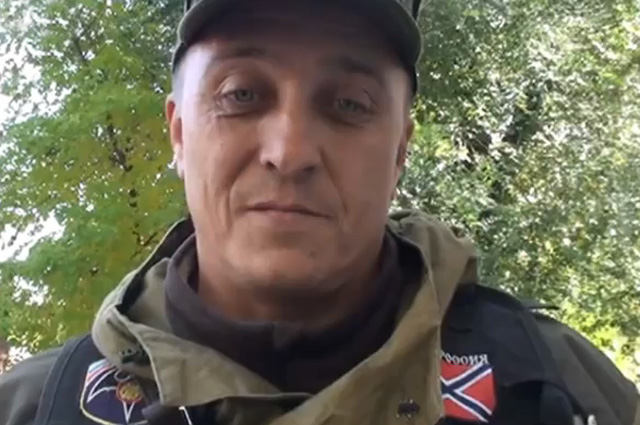 A couple months ago, the French newspaper “l’Obs” met the pro-Russian separatist leader, Alexandr Bednov; also know by his nickname, “Batman”. Their investigation into his murder may reveal a huge influx of humanitarian aid, which could be traced back to Moscow.

On January 1, in Moscow, Alexandr “Batman” Bednov and six of his security guards were ambushed and killed in the south of Luhansk. Their murderers left two car wrecks and seven corpses behind. This is allegedly a dramatic murder of a man who knew too much.

Since May 2014, the Ukrainian army and pro-Russian separatists – from the self-proclaimed People’s Republics of Luhansk and Donetsk, the LPR and DPR respectively, supported by Moscow – have been at war. Since August 2014, Russia has openly sent humanitarian aid to the occupied areas. Furthermore, NATO and European Union have accused Russia of covertly providing military assistance to separatists.

However, Ukrainians are not responsible for the high-profile murder of the man who was considered one of the most powerful pro-Russian leaders in eastern Ukraine. This deadly shootout is the result of a month-long internal struggle between Bednov and pro-Russian leader Igor Plotnitsky. Leader of the Zarya (in Russian “dawn”) Battalion, Plotnitsky won a November 2014 election – which many in the international community along with Ukraine deemed illegitimate –and became head of the LPR. Since then, Igor Plotnitsky has been unanimously considered the ‘Kremlin’s man’ in the Luhansk’s region. Bednov wanted to run for presidency, but was held at gunpoint when he tried to register his candidacy.

“Batman had relevant evidences of Plotnitsky’s involvement in various trafficking, including significant misappropriation of humanitarian aid. This is the reason why he was killed,” said Yuri B. in his small Saint Petersburg flat. Before Bednov’s death, Yuri, a Russian aged 60, had been one of Bednov’s advisors. Fearing for his life, Yuri returned to Russia after spending six months in Luhansk.

“We are not angels. Every single pro-Russian battalion racketed local firms and was engaged in trafficking for financing as an anarchic form of tax,” he admits, De facto, separatist areas have been forming a genuine criminal enclave with businesses, gang-style shootouts and, of course, so-called ‘godfathers’ since the beginning of the war in Ukraine.

According to Yuri B., Plotnitsky may be Luhansk’s ‘godfather’. “Everybody knew that Plotnitsky was trafficking humanitarian aid in the area. In October 2014, Batman gave me the responsibility to recollect information on trafficking scoop,” added Yuri. As a former inspector of the criminal police of Saint Petersburg, Yuri B. did not waste time in carrying out his task with help from many of Bednov’s contacts in the Luhansk police force. “The numbers were staggering, millions of dollars”, Yuri continued. The results of this secret enquiry may have driven Bednov and his lieutenants in attempt to overthrow Plotnitsky.

In November 2014, when Plotnitsky was elected president of the LPR, Batman discreetly contacted two other main pro-Russian leaders in the area: Cossack chief Pavel Dremov and brigade leader Alexey Mozgovoy. Their goal was a coup. With thousands of people under their leadership, they believed they would succeed.

The conspirator hoped to overthrow Plotnitski by publicizing their investigation. On December 29 2014, Dremov released a video titled “Plotnitsky, Resignation!” in which he claims: “Of every 10 humanitarian aid convoys sent, people only receive one! The rest is sold!” Three days after Bednov died. “Plotnitsky’s men searched our bases, seized all the documents we gathered… there is nothing left,” said Yuri B.

Since August 2014 the Russian government has sent more than 30 humanitarian aid convoys to the Donbas, with more than 20,000 tons of food, medication, fuel and building supplies. This operation has become a Russian propaganda tool. Images of endless rows of aid trucks from Russia are numerous on public television stations and, according to Russian propaganda, serve as proof that Russia is the only state eager to save people in the Donbas from what Russia is calling a genocide – orchestrated by Kiev’s fascists and their western allies.

“This operation is predominantly political, and we try to stay as far as possible from it,” said a member of the International Committee of the Red Cross (ICRC) serving in the Donbas. This executive stated that convoys sent from Russia represent the largest volume of aid to people in the Donbas, far ahead of aid from NGOs.

In Donetsk, pro-Russian separatists stressed that nearly 400.000 people rely on these Russian convoys every day. Separatists also claimed that it is “technically possible” to embezzle humanitarian aid. However, many Donbas inhabitants said they never saw any of the Russian aid that crossed into the Donbas.

In Russia, the Ministry of Emergency Situations is in charge of forming and sending aid convoys to separatist areas. The Ministry’s spokesperson, Alexey Vagutovich, denied aid embezzling is occurring. According to Vagutovich, accusations of embezzlement are “vicious rumours”. However, Vagutovich said that Moscow does not control distribution once aid reaches the Donbas. ”Our only mission is proper goods delivery in Donetsk and Luhansk”, said Vagutovich, adding that the rest is the responsibility of separatist authorities. This is where embezzlement could theoretically occur.

Yana Kotsyuruba knows the system from inside. From October 2014 to January 2015, she worked in the separatist administration in charge of Luhansk’s social affairs. “My function was to gather aid demands from the population and then to forward them to the LPR’s Ministry of Social Affairs Kotsyuruba continued, “Despite the high stock levels, distributions were scarce.“Only the persons coming directly to the administrative headquarters received aid packages. Those who were not able to come didn’t receive anything. At the same time, goods we were supposed to distribute began to appear in some markets and shops in Luhansk.”

Since autumn 2014, separatists have ‘nationalized’ a lot of markets and shops. According to Kotsyuruba, this is where much of humanitarian aid is being sold. According to a document released on May 21 by the website Informator-Luhansk, the LPR has been selling outdated food from Russian humanitarian convoys in nationalized shops.

Captain Roman O. also took part in the investigation into Plotnitsky, which Bednov opened. Roman O. is one of the few officers of the Bednov battalion who escaped purges. He still heads a company of a hundred men. According to him, diverted aid amounts to colossal proportions, “Up to 50 percent of goods,” he whispered during the interview. Roman O. claims that diverted aid was not only sold openly in separatist parts of the Donbas, but also smuggled in Ukraine.

Warlords often prey on humanitarian aid in conflict areas. However, according to Roman O., the Donbas case is considerably different:  he accuses Russian political officials of direct involvement in aid diversion.

“A part of the income from this trafficked aid goes back to Russia, into the pockets of those very officials organizing the delivery of humanitarian aid,” he explained. Such allegations are impossible to verify, but Roman O. stands his word. According to him, the order to kill Bednov would have come directly from Moscow.

Roman O. asserted that the person in charge of the ambush that killed Bednov was Colonel Evgueni Wagner. In September 2014, Col. Wagner was appointed to the position of Deputy Commander for Counterterrorism in the northern Caucasus, including Chechnya and Dagestan among others. Roman O. offered a one-word explanation of why such a colonel would come to Eastern Ukraine: “Cleaning.” Since November 2014, many pro-Russian unities fighting against Plotnitsky in Luhansk area have been disarmed. When some of them were interviewed, they all pointed to Col. Wagner.

“I met Wagner and his men in February,” said Roman O. “I asked him if his men were involved in any way in the death of my Major, and he acquiesced. He explained to me that the decision of shooting Batman had been taken at the highest level within the Ministry for Emergency Situations of Russia.”

When asked specifically who gave this order, Roman O. responded, “I do not fear death but I have a family, and these men are capable of anything.” He continued,”I can only say that an embezzlement of this size would be impossible without the complicity of Russian officials.” L’Obs could not confirm these allegations.

In his stronghold 50 kilometres from Luhansk in Stakhanov, Cossack Pavel Dremov confirmed Yuri B. and Roman O.’s claims: “We communicated documents to Batman’s men about Plotnitsky, who I consider a traitor.” Dremov declared that he still has some materials, but he refused to disclose the information saying, “I do not want our enemies to use these pieces of information to discredit our whole cause.” Dremov said that if the information were disclosed, an entire panel of Russian propaganda would collapse. Bednov’s death brought Dremov back on “better” tracks.

Mozgovoy felt differently. Roman O. expressed his concerns to L’Obs about seeing Mozgovoy killed like Batman. His concerns proved valid when, on May 23, Mozgovoy and his security guards were killed in an ambush near Luhansk. During his last interview for “The Independent”, a British newspaper, Mozgovoy said he had received death threats. When asked who was making such threats, Mozgovoy responded, “People who do not want the influx of cash going right into their pockets to stop.”