Kyiv, August 4, 2015. In its latest report, the OSCE mission confirmed Ukrainian intelligence reports that Russia-backed militants are stationing heavy weapons in residential areas near the front line. “In particular, the observers informed us about 140 explosions in the center of Donetsk,” said Colonel Oleksandr Motuzyanyk the spokesperson of the Administration of the President of Ukraine on ATO-related issues, during a press briefing at Ukraine Crisis Media Center.

According to Col. Motuzyanyk, in the vicinity of Donetsk, militants systematically violated the ceasefire along the conflict line from Troyitske to Leninske. “Near Troyitske the enemy conducted shelling of Ukrainian positions with 152-mm guns located in Horlivka near the Siverskyi Donets river. The shelling lasted about an hour. On the western outskirts of Donetsk, the fighting continues 24 hours a day. The enemy centers artillery fire on the positions of Ukrainian forces in the near rear, which are located at a distance of 10 to 15 kilometers from the front,” added Col. Motuzyanyk. 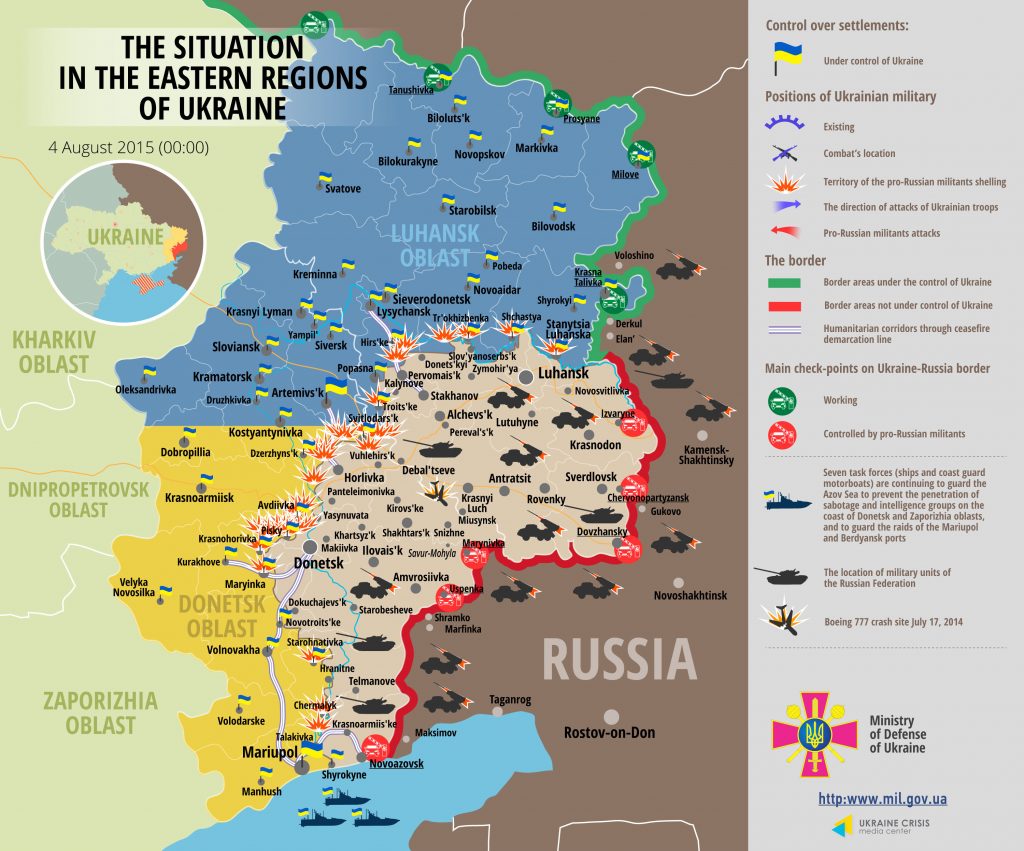 There are two major points of tension in the vicinity of Luhansk: Stanytsia Luhanska and advanced Ukrainian positions on the right bank of the Siverskyi Donets River near Bahmutskyi road. “The enemy continues to follow the tactics of night attacks and provocations with the use of grenade launchers and mortars. Short-term armed enemy provocations were carried out in Shchastya, and in Zolote the militants fired at the Ukrainian strongholds from mortar and anti-aircraft guns. No use of tanks and artillery on the front section from the Russian border to Popasna were recorded,” explained Col. Motuzyanyk.

In the vicinity of Mariupol, the epicenter of the fighting was the Starohnativka metropolitan area where Russia-backed militants conducted mortar and artillery shelling on Ukrainian forces. “Yesterday, they began shelling shortly after midnight and late at night. Several provocations of militants were recorded near Pavlopilske reservoir. It was quiet to the south of Pavlopil but near the village of Talakivka, located near Mariupol, a mini tractor was blown up by a mine, and the tractor’s driver was hospitalized,” said Col. Motuzyanyk.

Three Ukrainian soldiers were killed in action and seven were wounded in action. Ukrainian troops suffered these losses in the Luhansk and Donetsk metropolitan areas.

Representatives of the Joint Center for Control and Coordination recorded that militants fired from 122mm guns in the east, from militant-controlled Yasynuvata. “Five shells exploded. Explosions damaged a pipeline and power lines. There were no victims,” reported Col. Motuzyanyk.

Ukraine’s Security Service in Luhansk region discovered an informant from an intelligence network known as Luhansk People’s Republic Ministry of State Security. “The perpetrator was recruited by the militant nom-de-guerre Svyetoch with the purpose of gathering intelligence data on the position and movement of Ukrainian units, types of weapons and their transportation. For his work, the accomplice of militants received financial reward that came through his wife, who also works in the territory of the occupation administration of Luhansk region,” explained Col. Motuzyanyk.

Additionally, the Security Service seized weapons from members of the organization known as Kharkiv Guerrillas. “Three saboteurs coordinated by Russian special services were detained in late May. The leader of the gang brought weapons from Russia and kept them at his vacation home near the border. During searches, the security service seized a grenade launcher, a Kalashnikov rifle with a grenade launcher rifle, rifle grenades, flares and a large amount of ammunition,” concluded Col. Motuzyanyk.