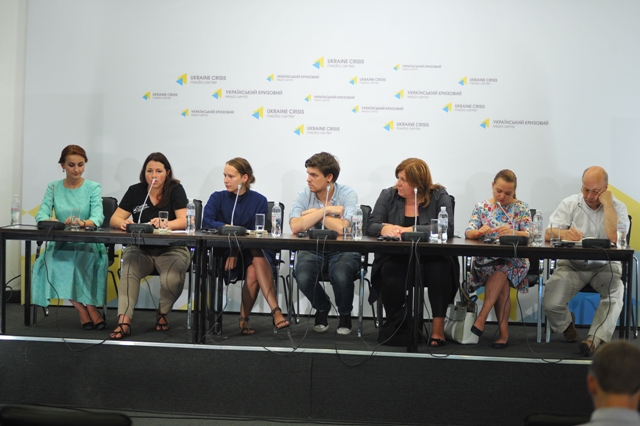 Liga Rudzite, from the Latvian Platform for Development Cooperation (LAPAS) explained that LAPAS brought together over 30 civil society organizations to call attention to anti-corruption, tax justice, global justice, and human rights, all of which LAPAS considers global issues. As part of including Latvia in the global dialogue, LAPAS has identified Ukraine as a priority country to collaborate on anti-corruption and EU integration issues.

Jansone added that corruption is prolific within all levels of society in Ukraine. While speaking optimistically about the Ukrainian government’s attempts to fight corruption, she warned that the Anti-Corruption Bureau is “under a big shadow and there is something going wrong.” Her primary concern lay in maintaining Ukraine’s current momentum in fighting corruption.

Dāvis Landorfs, a freelance journalist drew a connection between corruption and the humanitarian crisis in eastern Ukraine. According to him, charity has been diverted from people in the east to the military and the IDP situation in Ukraine. “It doesn’t take a genius to figure out that the lack of [government] capacity and funds” is related to corruption.

Speaking further on humanitarian issues, Edīte Kalniņa from the European Women’s Lobby discussed her meeting with a women’s rights umbrella organization in Ukraine. She opened with an observation from her visit to an official government building. She said as she entered the building, she observed expensive luxury cars parked at the entrance. She sighted this as a clear sign of government corruption. Kalniņa expressed her hope that in the future, such signs of extreme income inequality would no longer be prolific within the government. She also expressed her enthusiasm for collaboration between Latvia and Ukraine on promoting women’s rights through mentorship of young future leaders.

Kalniņa also took the opportunity to draw attention to Nadiya Savchenko, a Ukrainian air force pilot captured by Russian-backed militants and sent to Russian where she has been imprisoned since 2014. Kalniņa cited Savchenko’s situation as a major women’s rights issue.

Agnese Alksne from Corporate Social Responsibility Latvia introduced her organization, saying that its main focus is on sustainability in the context of corporate social responsibility (CSR) in value chains amongst private enterprises. She stressed the importance of collaboration between the Ukrainian government and civil society, as she believes that both parties are working parallel without coordination. Alksne said that while Ukraine knows what reforms to introduce, Latvia could provide expertise to help implement such reforms, especially good governance of state-owned enterprises to help Ukraine enter into international markets.

Liga Rudzite, from the Latvian Platform for Development Cooperation, stressed that rather than taking shortcuts, the Ukrainian government should be the primary party responsible for anti-corruption measures and that Ukrainian civil society should push the government to fulfill its responsibility. She said that there are opportunities for Latvia to support Ukraine with anti-corruption measures on the grass roots level, and especially in e-governance.

Sophia Kovach from Transparency International (TI) Ukraine concluded the roundtable. She said that the Ukrainian government does not have the political will to help NGOs but that there are many encouraging projects throughout Ukraine. She stressed the importance of progress in the public procurement transparency, e-governance, and whistleblowers’ rights. In particular, she discussed TI’s work improving the transparency of public procurement, and launching public campaigns and projects to support whistleblowers to garner support for those who come forward to draw attention to corruption.