Kyiv, August 6, 2015. A slight decline in ceasefire violations by Russian-backed militants was registered in ATO zone yesterday. “Only one attack was registered in the Mariupol sector [one of the sections into which the ATO zone has been split for coordination purposes] yesterday. Militants attacked a Ukrainian stronghold near Hranitne with mortars in the evening,” said Colonel Oleksandr Motuzyanyk, spokesperson of Administration of the President of Ukraine on ATO-related issues, at a press briefing at Ukraine Crisis Media Center. 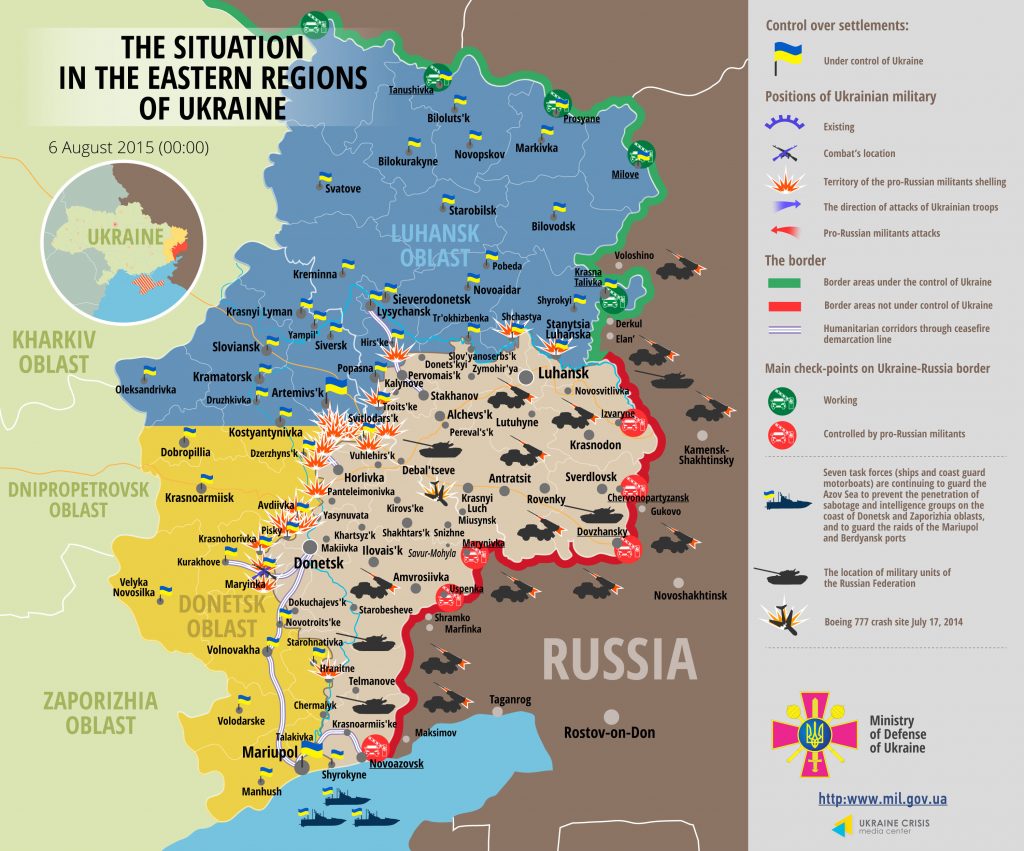 In the Luhansk sector, skirmishes between militants and Ukrainian troops in Shchastya continued throughout the day. Another militant attack was registered in Stanytsia Luhanska. “The situation in the western part of the region was more tense. The enemy shelled Ukrainian fortifications near Zolote at around 2 p.m. for half of an hour. There was a skirmish in which militants used antitank-guided missile systems and armored vehicles near Troyitske at twilight,” noted Col. Motuzyanyk. Late in the evening, militants fired on Ukrainian troops in the aforementioned locations with 122-mm artillery.

In the Donetsk sector yesterday, only several shelling incidents were registered in the vicinity of Svitlodarsk. Militants fired at Ukrainian positions in Luhanske and Lozove with machine guns and grenade launchers. “Ukrainian forces returned fire. Ukrainian troops deployed to Snazharivka near Debaltseve were under mortar attack for an hour,” noted the ATO spokesperson. The situation to the north and west of Horlivka remains tense, especially in towns along the Artemivsk-Horlivka railway.

Militants conducted two attacks near Verkhnyotoretske. The situation in the western outskirts of Donetsk remains unchanged: Constant fighting continues. “Avdiivka suffered the most damage. Militants shelled residential areas there from Spartak three times with 122-mm artillery guns. Since the beginning of this year, 31 civilians have been killed and 87 wounded, including three children resulting from militant shelling of the city,” said Col. Motuzyanyk.

The situation along the frontline near Maryinka remains tense. Russian-backed militant reconnaissance groups coming from the northeast continue attempts to penetrate the Ukrainian defensive line. Militant snipers hiding in coal waste piles still fire on ATO forces in the area.

Five Ukrainian troops were killed and six wounded in action over the last day.

Ukrainian troops registered 13 militant unmanned aerial vehicles (UAVs) in the ATO zone yesterday. Three more UAVs were registered in other key areas including at the administrative border between occupied Crimea and the rest of Ukraine as well as over the Russian-Ukrainian border in northern Ukraine.