Kyiv, August 11, 2015. Starohnativka and the adjacent areas became a key point of Ukrainian defense in the Mariupol sector yesterday. “Ukrainian forces repelled a militant attack, moved to the offensive and resumed control over strategic heights. Despite the losses incurred by pro-Russian militants, they continued shooting at our positions near Starohnativka from artillery during the day and at night.  Moreover, the occupants fired at our checkpoints from Grad multiple rocket launchers (MLRS) deployed in the vicinity of Rozdolne south of Komsomolske. It is less than 15 kilometers from the front line,” said Colonel Oleksandr Motuzyanyk, spokesperson of the Administration of the President of Ukraine on ATO-related issues, at a press briefing at Ukraine Crisis Media Center. Two firefights between militants and Ukrainian troops took place in Shyrokyne. 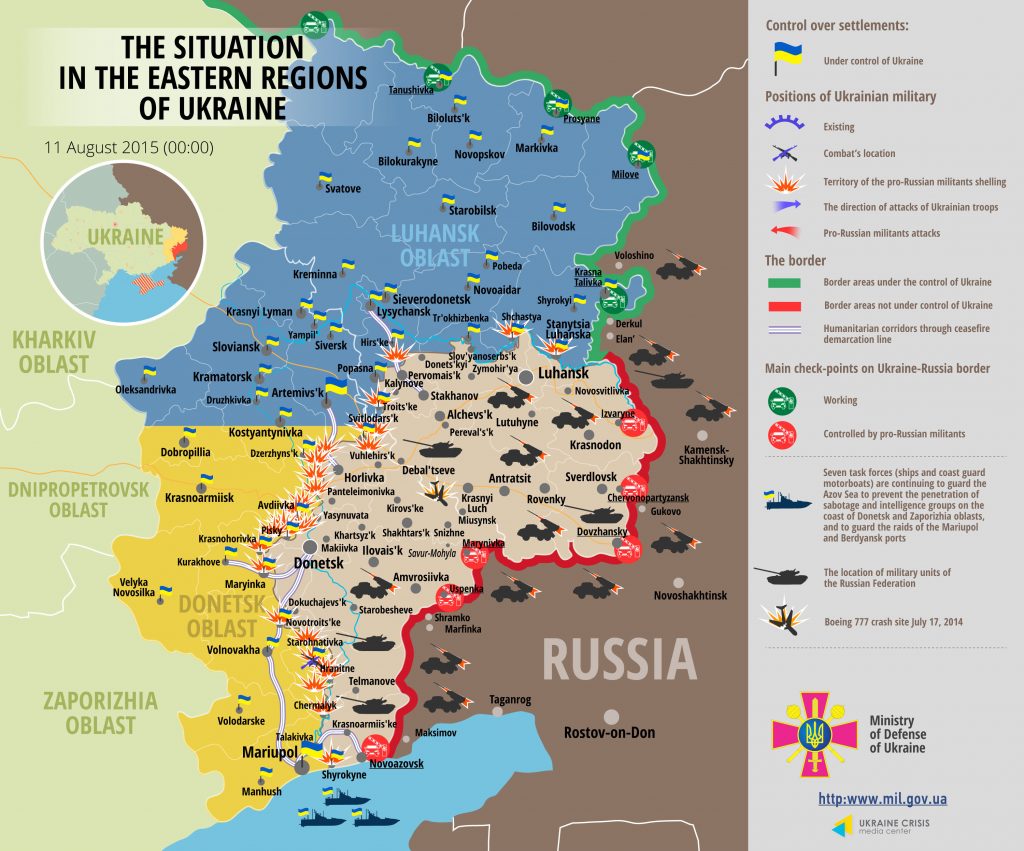 No armistice violation was observed between Staryi Aidar and Orikhove in the Luhansk sector. Late at night militants fired on Ukrainian troops near Stanytsya Luhanska for two hours. A brief attack occured near Shchastya in the morning, while at 2 a.m. Russian-backed militants used mortars in the vicinity of Zolote. Ukrainian fortifications were shelled from artillery including reactive artillery in Troyitske, where the situation remains volatile.  “Information on the enemy’s howitzer battery being deployed in Stakhanove and Grad MLRS used in Irmine has been confirmed,” said Col. Motuzyanyk.

In the Donetsk sector near Svitlodarsk, militants sporadically fired with light weapons at the frontline from Rozsadky to Luhanske.   The situation held near Horlivka as well. Militants were active only in Mayorsk and Novhorodske, shooting at Ukrainian troops from areas adjacent to Horlivka. In the area between Horlivka and Yasynuvata Russian-backed militant groups fired on Ukrainian checkpoints in Verkhnyotoretske and Kamyanets. Militants accumulated heavy arms in residential areas of Panteleymonivka and Yasynuvata, actively using the weapons, mostly at night. Pisky settlement became the epicenter of combat on the western outskirts of Donetsk. “Residential quarters of Krasnohorivka were shelled by the enemy late at night.  Pro-Russian militant groups are systematically using heavy arms, such as tanks and artillery,” said Col. Motuzyanyk.

One Ukrainian soldier was killed in action over the last 24 hours, and thirteen were wounded in combat. ATO forces incurred these losses in the Donetsk and Mariupol sectors, mostly near Horlivka, Donetsk and Starohnativka.

Ukraine’s Security Service detained another suspected militant. “Investigators detained a Lieutenant Colonel of Justice while he was transferring secret information to an enemy operative. The traitor held office as a deputy head of the Security Service Investigative Department in the Donetsk region,” informed the spokesperson. An officer of the Russian Federal Security Service with nom de guerre ‘Spaniard’ was coordinating the work. “Russians were amply rewarding their agent for valuable information. Forty thousand dollars in cash were seized from the suspect,” added Col. Motuzyanyk.

Ukrainian border guards detained a militant at a checkpoint near Berezove village in Maryinka district of Donetsk region. A vehicle was traveling from militant-controlled territory toward the Ukrainian checkpoint but made a U-turn before entering the checkpoint. The driver was a man wearing a uniform with insignia of the self-proclaimed “Donetsk People’s Republic” (“DPR”). A so-called service-record book issued by militants as well as AK assault rifle ammunition were seized as Ukrainian border guards searched the driver.

Law enforcement officers stopped a truck on the Pervomaysk-Lysychansk road. While searching through the freight, investigators found and seized two kilograms of explosives, thirty cartridges, two smoke grenades and ten blasting caps for grenades. Ukrainian border guards seized ammunition and explosives at a checkpoint in the Luhansk region, including a dispenser magazine, two flares, one percussion mechanism and a substance that resembled plastic-based explosives. “A well-trained guard dog made the dangerous discovery,” said Col. Motuzyanyk.