Kyiv, September 1, 2015. Ukrainian troops did not incur any casualties over the last day, and not a single Ukrainian serviceman was wounded in action. “No enemy activity using heavy weapons, mortars, tanks or armored vehicles occured either,” said spokesman of the Administration of the President of Ukraine on ATO-related issues Colonel Oleksandr Motuzyanyk at a press briefing at Ukraine Crisis Media Center. In the Luhansk sector, Krymske was the only hotspot where militants instigated two armed provocations at night. 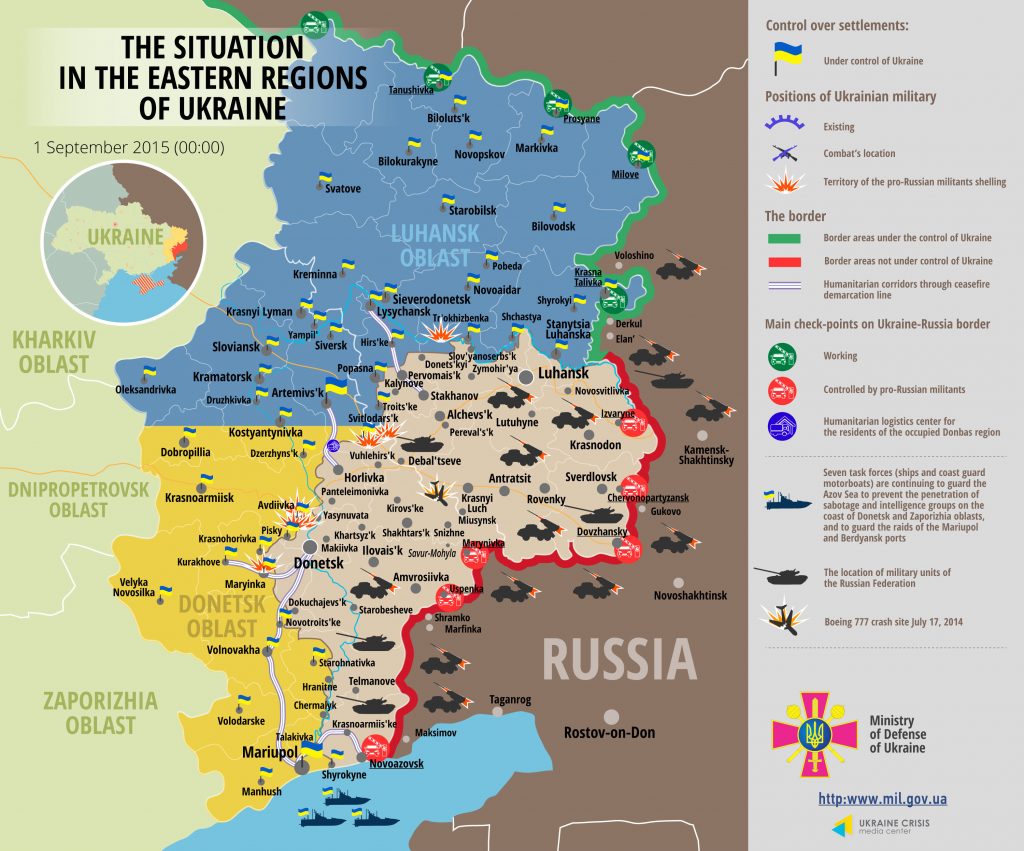 In the Donetsk sector, there were slight tensions close to the frontline near Svitlodarsk in the evening. Militants fired twice from small arms upon Ukrainian frontline positions near Sanzharivka and Lozove. The situation remained calm in Horlivka, Dzerzhynsk and to the south near Yasynuvata. “The most turbulent spot yesterday was the area of the Donetsk airport, where combat actions lasted between 4 pm and 11 pm. The enemy opened fire using small arms and grenade launchers near Avdiivka and Opytne 10 times,” noted Colonel Motuzyanyk. Four more militant provocations happened in Maryinka. It was quiet on the road from Donetsk to Mariupol yesterday. “In the Mariupol sector, there have been no combat actions for the second day in a row,” noted the ATO spokesperson.

Ukraine’s Security Service detained a resident of Kostiantynivka who was fighting as part of the self-declared “Donetsk People’s Republic” (“DPR”) militant group. The perpetrator was training militant snipers in Donetsk in September of last year. The detained was allegedly also trained as a subversive agent and took part in combat actions against Ukrainian troops near Debaltseve, Vuhlehirsk and Svitlodarsk. He was trying to leave for Russia between May and July of this year due to internal disagreements among militants. “The perpetrator came back to Kostiantynivka to obtain some documents where he was detained by Ukrainian law enforcement.. An RGD-5 hand-held grenade was seized from him,” said Col. Motuzyanyk. Ukrainian law enforcement staff also detained a man in Donetsk region who was directing fire upon the positions of Ukrainian Armed Forces near Starohnativka, Novohryhorivka and Hranitne. He was recruited by a militant with nom-de-guerre “Vozhak.”

Militant group members who have not committed grave crimes have a chance to return to normal life. “Thus, another man is back home, he stood guard on block-posts in occupied Horlivka and was securing seized buildings. He has recently addressed Ukrainian law enforcement and agreed to tell the truth about militant activities,” said Colonel Motuzyanyk.

Ukrainian law enforcement staff searched private premises near Ukrayinsk, Donetsk region. They seized TNT blocks, two meters of Bickford fuse, several fuses, an RGD-5 grenade, a home-made explosive and the flag of the militant group. Ukraine’s Security Service also prevented the transfer of a large sum of money to an enterprise that continues working on the occupied territory. “Using Ukrainian registration documents, the company was trying to get the money in an illegal way, but Ukrainian law enforcement staff prevented the crime and asked the State Fiscal Service to check the company,” said the ATO spokesperson.