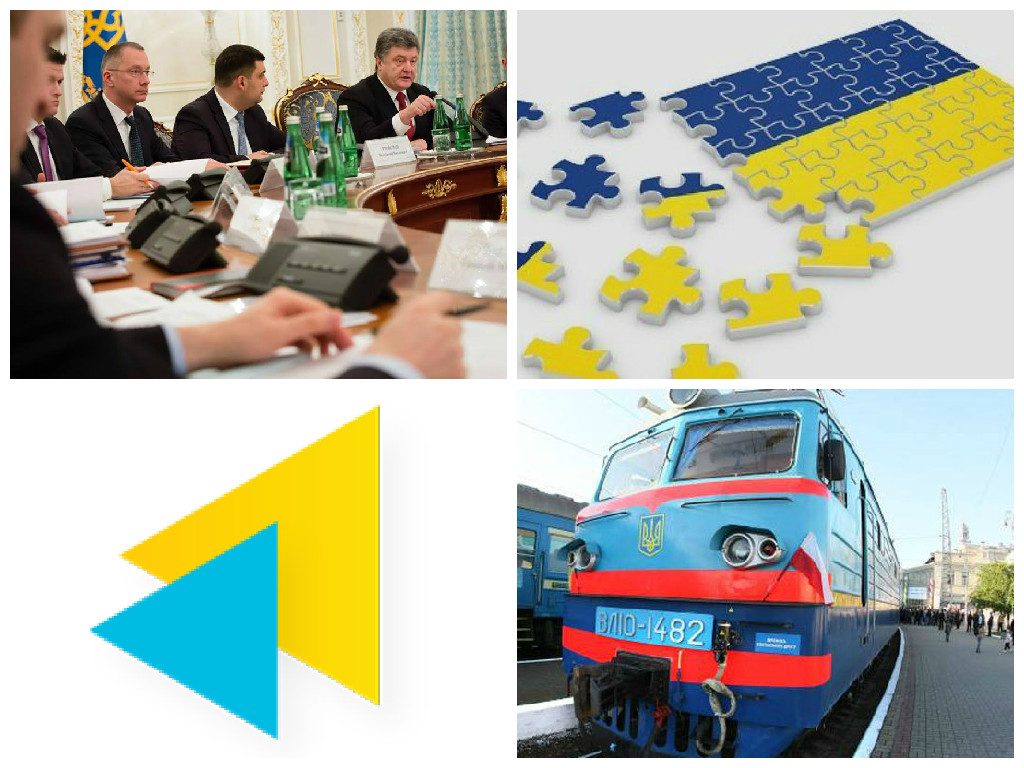 State property management. Government adopted the decision to corporatize Ukrzaliznytsia (Ukrainian State Railway company), the structure is to be turned into a public joint stock company in which the state is to have a 100% share. The process is due to be finalized by the end of November 2015. According to the estimation of Ukrzaliznytsia assets by Deloitte they are worth of UAH 245,5 billion, which is three times bigger than the sum mentioned in Ukrzaliznytsia’s report confirmed by audit pertinent to the results of previous years. Corporatization will help drastically change Ukrzaliznytsia’s management approach that in turn is to result in increased effectiveness of the company’s operation, quality of services and annulment of corruption risks.

Defense Ministry made an unprecedented step: being first among the law enforcement agencies it has introduced the automated registry of housing and property. The database available online has already got 80 000 entries. The project was created over six months thanks to volunteers’ support. It is called to prevent corrupt practices when managing immovable military property and providing housing for servicemen.

Tax reform. Unified vision as to the model of the tax system reform in Ukraine is to be achieved in the nearest week. It needs to become a compromise among the civil society, business and the Ministry of Finance. The decision was adopted based on the results of the last meeting of the National Reforms Council where the tax reform was the key issue.

Two tax reform concepts were presented during the meeting of the National Reforms Council. First one is fiscal presented by the Finance Minister Nathalie Jaresko, second is liberal prepared by the Head of the Parliamentary Tax Committee Nina Yuzhanina. The concept by the Ministry of Finance foresees equalizing rates of the Unified Social Tax, individual income tax and corporate income tax at 20% level and using simplified system only for individuals. The concept suggested by Yuzhanina introduces 20% rate for the Unified Social Tax, 10% rate for individual income tax, 15% rate for VAT and corporate income tax. It also stands for reforming simplified taxation for individuals and legal entities to cut the use of simplified taxation by big businesses for the purpose of minimizing taxes.

At the meeting of the National Reforms Council President Petro Poroshenko emphasized the need for comprehensive reforming of the State Fiscal Service and noted that the main task of the tax reform is to stimulate business activity.

Decentralization. An obstacle has been removed on the way towards creating capable communities; the obstacle was unwillingness of regional authorities to redraw the administrative-territorial structure. Regional council is the body that formalizes the decision of communities at basic level to unite and sets the date for holding first local elections in these newly created communities. At the end of summer several regional councils openly sabotaged adoption of respective decisions despite the will of the united communities’ residents. Thus they faced the risk of being deprived of choosing the new authorities and the entire decentralization reform was at risk. On September 3 the Verkhovna Rada (Ukraine’s Parliament) resolved the problem by adopting the law empowering the Cabinet of Ministers with to approve decisions  that enable establishing united territorial communities (instead of regional councils) as well as tasked the Central Election Commission to set the date for local elections.

Simultaneously powers are being transferred to the local level. Thus local communities were granted the right to independently define tariffs for centralized water supply and water disposal. It is a technical decision but it grants strong tools to local authorities in the sensitive social sphere of tariff-making.

Deregulation. Parliament adopted the Law “On e-Commerce” that has settled commercial relations connected to Internet and e-document workflow. The document that business was expecting for many years resolves majority of problems that the companies operating in the Internet are facing. Thus the law makes both electronic and paper documents equally accepted. It also clearly differentiates responsibilities of e-commerce parties and grants higher protection to the e-services consumers.

It is worth noting that the law in question matches the requirements to Internet commerce in force in the EU.

Social standards reform. For the first time in the last one and a half year not only the minimum salary and the minimum subsistence level were increased in Ukraine, but the first tariff level of the salary grid has been raised as well, it is the basic element defining the salaries of public institutions employees. It is to result not only in rising minimum social standards but in salaries of the government sector employees as well. It is also to take social justice into account: the more qualified the employee is the higher is the salary increase. It is important to note that the resource that enabled this increase is not caused by emission: it became available due to the cut of state expenditure, optimization of fiscal activities as well as saving resources when servicing the state debt due to reaching agreements on re-structuring.