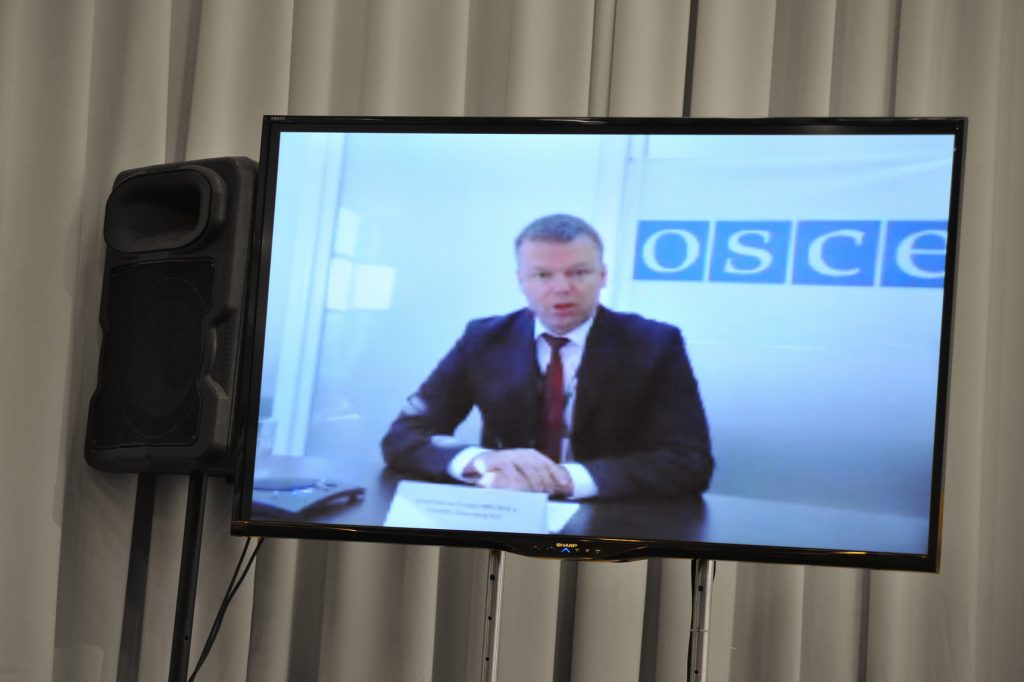 Kyiv-Luhansk, 2 September 2015.  This week’s new agreement in Minsk can pave the way to durable peace in Eastern Ukraine.  The working group on security issues of the Trilateral Contact Group produced a package of measures – a plan for withdrawal to a distance of 15 km the following weaponry: tanks, artillery up to 100 mm and mortars up to and including 120 mm in caliber. The withdrawal will be implemented in two stages. First stage will start following two days of full ceasefire, and will take place in most of the security zones in Luhansk region. All of that should take 15 days. The second stage will be across the rest of the security zone and should take 24 days. The SMM will provide monitoring and verification of this plan’s implementation within its mandate, stated Alexander Hug, Deputy Chief Monitor of the OSCE SMM in Ukraine via Skype at the Ukraine Crisis Media Center. “If implemented fully and in good faith, this plan could make a significant contribution to strengthening the ceasefire”. Mr. Hug is now in Luhansk where the SMM is working on establishing further presence in the region as well as assessing and addressing the humanitarian situation.

According to Mr. Hug, the situation in eastern Ukraine remains relatively calm. Few ceasefire violations have been recorded, most of which involved small arms. Observed usage of heavy weapons was largely viewed as being part of training exercises. Alexander Hug stressed that “such exercises serve as a reminder of the continuing threat of reescalation. The volume of heavy weapons is high” as SMM unmanned aerial vehicle (UAV) flights continue to spot military hardware in areas both controlled by the government and the so-called “Luhansk People’s Republic” (LPR)  and “Donetsk People’s Republic” (DPR). Heavy weapons continue to be missing from the holding areas on both sides. The “training exercises and the presence of heavy weapons cause tensions and pose serious risk to civilians. Last week it caused death, injury and material harm,” he added.

In spite of that, the SMM’s estimate is that people on the ground have greater confidence that normalization is possible. More of them are returning to their homes and more businesses are reopening. Yet the humanitarian situation remains troublesome especially ahead of winter. The SMM’s major concerns are restoration of heating systems and affordability of fuel. Prices for the main food items in the areas not controlled by the government also seem to be higher than they used to be.

Against this backdrop, the Deputy Chief Monitor expressed his concerns on the suspension of nearly all humanitarian programs in the region by so-called “LPR” and “DNR”. At the same time, according to him, the UN was allowed to return to the so-called “LPR”-controlled areas in order to continue the registration process regarding the delivery of humanitarian assistance. However, no other humanitarian providers including international organizations and NGOs can now deliver humanitarian aid there. In the territories controlled by the so-called “DPR” only “Médecins Sans Frontières” and the International committee of the Red Cross (ICRC) were allowed to work. In this regard, the SMM is cooperating closely with the UN and the ICRC, monitoring human rights and humanitarian needs of the population in the region and referring the relevant information to international organizations.

Mr. Hug also disapproved of the difficulties that the SMM continues to experience in their daily work, as significant obstacles to freedom of movement were present in non-government controlled areas. The so-called “DPR” and “LPR” denied the SMM access to heavy weapons holding areas and training grounds as well as prevented the Mission from reaching the international border between Ukraine and Russia.