Kyiv, November 10, 2015. Militants were firing upon the positions of ATO forces on northwestern and western outskirts of Horlivka including Mayorsk, Dzerzhynsk and Novhorodske in the Donetsk sector over the last day. They were using small arms and grenade launchers. Militant snipers were firing near Novhorodske for several minutes. “On the frontline between Horlivka and Yasynuvata it was turbulent only on frontline positions near Verkhnyotoretske. The enemy was firing from an infantry fighting vehicle BMP-2 and an anti-aircraft mount ZU-23-2 for an hour,” said Colonel Oleksandr Motuzyanyk, spokesman of Administration of the President of Ukraine on ATO-related issues at a press briefing at Ukraine Crisis Media Center. The most turbulent situation was observed on the western outskirts of Donetsk between Avdiivka and Maryinka. Shots from militants’ small arms and grenade launchers were audible all day long but after the sunset militant groups became more active. “The enemy was not using heavy weapons including mortars and artillery in the area,” added ATO spokesman. 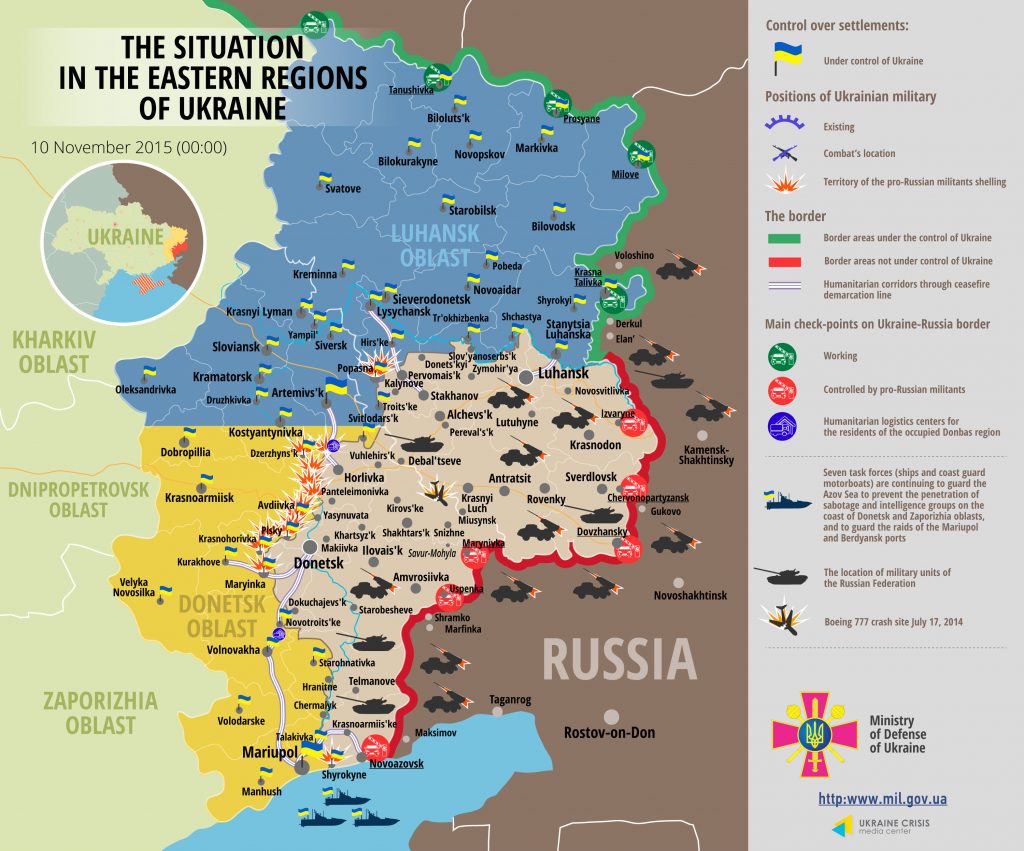 In the Luhansk sector, militants were using 120-mm mortars in the area of Popasna. Several militant-launched mines landed directly in residential areas. “Militants were firing from Molodizhne area adjacent to the occupied Pervomaysk,” elaborated Colonel Motuzyanyk.

In the Mariupol sector two militant provocations were registered in Shyrokyne, they were using small arms. “Ukrainian troops incurred no casualties over the last day, four servicemen were wounded in action,” added Colonel Motuzyanyk.

Ukraine’s Security Service neutralized explosive devices on the roads in Donbas. “A 120-mm mine with a plastic explosive and electric detonator was discovered near Chermalyk Volnovakha district of Donetsk region. It was planted on the roadside on the way used by both civilian vehicles and military equipment of ATO forces,” said ATO spokesman. Ukraine’s Security Service discovered five 120-mm pieces of high-explosive shells near Zholobok village, Luhansk region. Explosive mechanism of the pieces in question is based on TNT blocks and an antitank mine. “The mine was planted along the planned movement route of the Ukrainian Armed Forces convoy,” noted Colonel Motuzyanyk.

Ukraine’s Security Service in Kharkiv region blocked an attempt to smuggle VSS Vintorez sniper rifles, Kalashnikov rifles, grenade launchers, ammunition and explosive into Ukraine. “In course of the operation a smuggler –resident of Luhansk region was detained. His accomplice who took the weapons to the state border fled to Russia,” said Colonel Motuzyanyk. Ukraine’s Security Service also detained a Russian mercenary in Artemivsk. A native of Russia’s Riazan region convicted for a murder illegally crossed Ukraine’s state border and was trying to enlist in the “DPR” militant group.