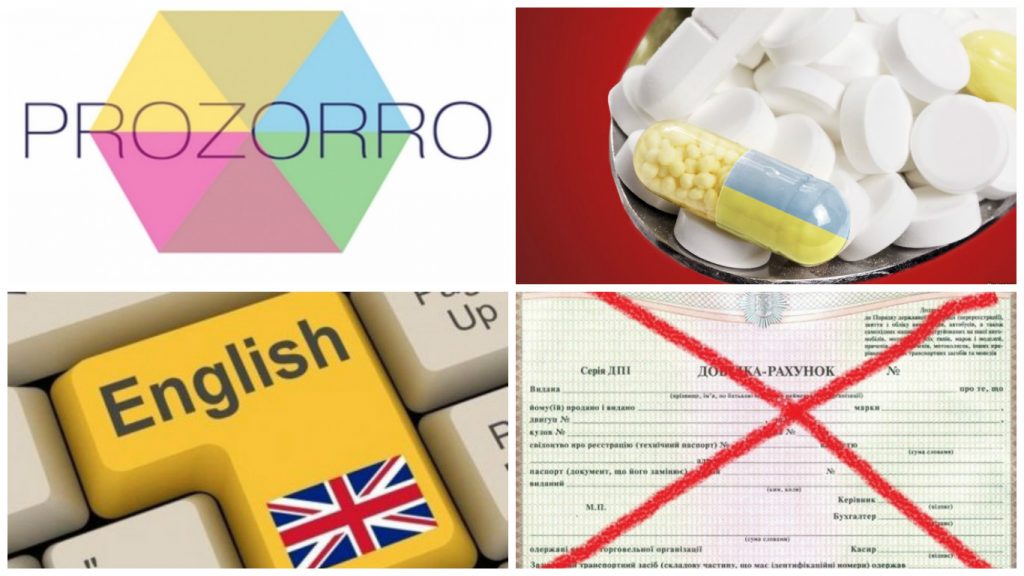 The government approved a draft law on public procurement and will soon send it to parliament.  With the support of MPs, the positive experience of subthreshold public procurement through the ProZorro electronic system will be extended to all central and local government expenditure. This system has helped to save over 400 million UAH.

Just two weeks after the Ukrainian Ministry of Health signed an agreement with the British “Crown Agents” development company for purchasing medicines for cancer patients (worth over 750 million USD), more than 70 Ukrainian and foreign companies have agreed to participate in the tenders.  Crown Agents is going to announce the start of operations next week.

Despite the opposition of the current leadership of Boryspil International Airport State Enterprise, a court ruled on the necessity to hold an open competition for a new company head. It is expected that the Nominating Committee of the Ukrainian Ministry of Economic Development and Trade will hold a meeting on November 24 to elect a new airport head.

Even small changes sometimes are able to improve ordinary citizens’ daily lives. Abolishing the requirement to provide an unnecessary certificate when you purchase a vehicle is one such example. The requirement, which complicated the conclusion of the purchase and sale contract and created significant corruption risks, will finally be canceled. The Cabinet of Ministers of Ukraine formalized the corresponding decision.

The Government made a similar step for Ukrainians, who live or frequently visit Italy (officially the number of Ukrainian citizens living in this country on a regular basis, is over 200,000 people). Due to an agreement between the governments of Ukraine and Italy, Ukrainians will no longer take exams to confirm the right to drive a car meaning Ukrainian driving license will be recognized on a par with the Italian document.

Despite the fact that most state-owned enterprises are unprofitable, the parties exercising operational control over such state property constantly block any attempts to radically change the situation. So, approval of the draft law, which introduces new approaches to the sale of state property, should be a priority for Parliament next week.  The draft law, among other things, introduces independent boards and eliminates  the need to sell 5-10% packages on the stock exchange, which usually interferes with an effective sale of state property.

2016 will be the year of English in Ukraine. The introduction of studying some subjects in English in higher education institutions, language groups in kindergartens and extension of language camps are all provided for by a Decree of the President of Ukraine. In this way, the President decided to support the public initiative Go Global, which has turned into a large-scale state program. The Government is responsible for Go Global implementation next year.

The European Union officially announced its readiness to establish a free trade area (FTA) with Ukraine from  January 1, 2016. Therefore, Ukrainian companies will receive access to a market of 500 million people. It is expected that stiff competition will stimulate Ukrainian businesses into upgrading and implementing European standards. According European Union diplomats, such a transformation had to happen. Therefore, Ukraine should not expect additional compensation from the EU for the Russian embargo on Ukrainian agricultural products.