Kyiv, November 23, 2015. Yesterday militants conducted a precise attack on the Ukrainian frontline positions in Stanytsia Luhanska, Luhansk sector. Militants were firing from the weapons mounted on an infantry fighting vehicle and located on the opposite side of the Siversky Donets river. Militant group members also fired from 82-mm mortars north of Bakhmutska road, said spokesman of Presidential Administration on ATO-related issues Colonel Andriy Lysenko at a press briefing at Ukraine Crisis Media Center. He also reported that two Ukrainian servicemen were killed in action and two were wounded in action over the last day near Stanytsia Luhanska. 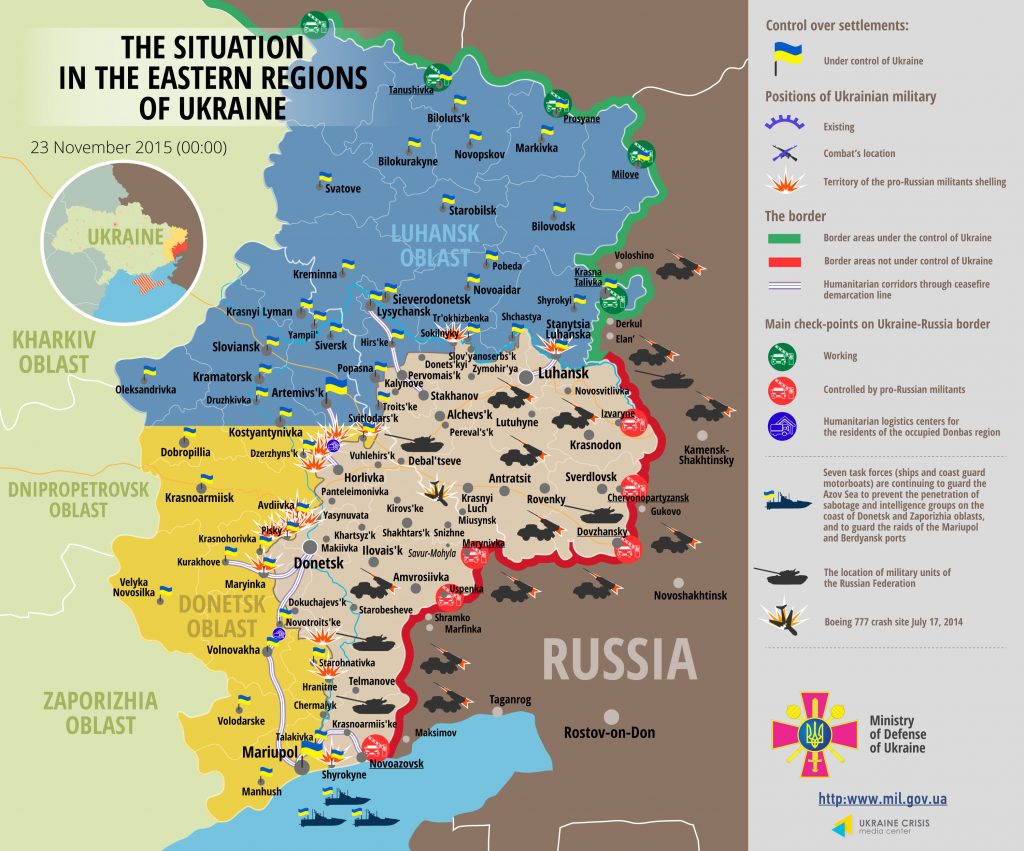 In the Donetsk sector militants were active on the Svitlodarsk salient yesterday, they were firing from mortars and used small arms near Luhanske for a short period of time. “Active combat actions continue on the northern and south-western outskirts of Horlivka. Militants were mostly using small arms and grenade launchers. Three mortar attacks on our positions also occurred in this part of the frontline,” noted Colonel Lysenko. He said western outskirts of Donetsk remain the epicenter of combat actions.

Highest number of ceasefire violation episodes by militant groups was registered in Opytne, Pisky and Maryinka. “The adversary takes positions at industrial factories, in the Putylivsky forest, at the ruined airport and in residential blocks in try to get as close as it can to the front Ukrainian positions. However, despite the attacks the line of contact remains stable,” ensured the ATO spokesperson.

In the Mariupol sector most complicated situation stands in Shyrokyne where three mortar attacks were registered yesterday. Militant provocations were also registered near Hranitne and Petrivske in Volnovakha district.

Colonel Lysenko reported that OSCE staff secured appropriate conditions for Ukrainian military medics to return the remains of the Ukrainian serviceman killed on November 15. “Bodies of his two killed brothers-in-arms were taken away right after the explosion. There was no safe access to the third body until the OSCE made militants stop shooting,” explained Colonel Lysenko.